It's not often in life that you finally achieve something that makes you feel like you have done the most amazing thing, yet today is how we felt after having a go at climbing our first Corbett, Morrone. We joined this site in July 2010 after Rick was introduced to walking in the Cairngorms by a work collegue. We started slow and low, Glen Tanar and Burn O' Vat being the main routes we walked. We then upped it to a couple of Marilyns. Since then, we have included longer distance walks and more Sub 2000's, but always dreaming of doing something better, something higher. Today was the day we would finally do something about it.

After a 'healthy' breakfast at the local McDonalds, we drove from Aberdeen to Braemar to climb Morrone. It was starting to rain when we left Aberdeen, but the further west we drove, the better it became. We arrived at the central car park in Braemar at 10:30am and immediately headed out to the duck pond. Upon arrival, we got mobbed by a dozen Mallards who liked to get up close and personal with us and our belongings. 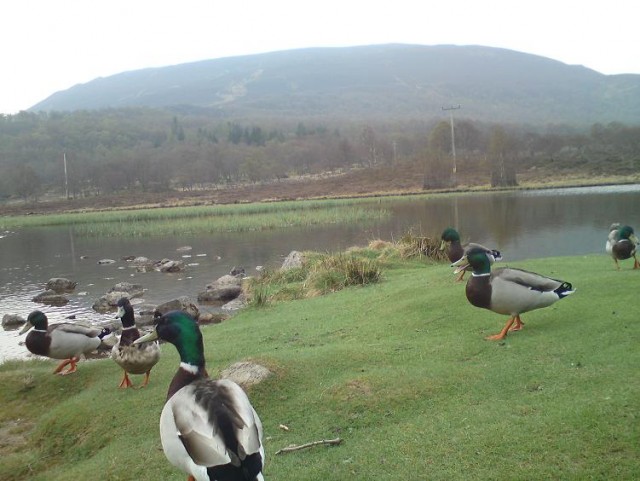 Smiling ducks and Morrone in the distance.

After a few photos with our new friends, we started to walk up the hill. We had a quick stop at the lower lookout and then started the uphill slug. There was a gloomy haze all around today and we knew that it would prevent us taking any decent photos, but that didn't stop us trying. 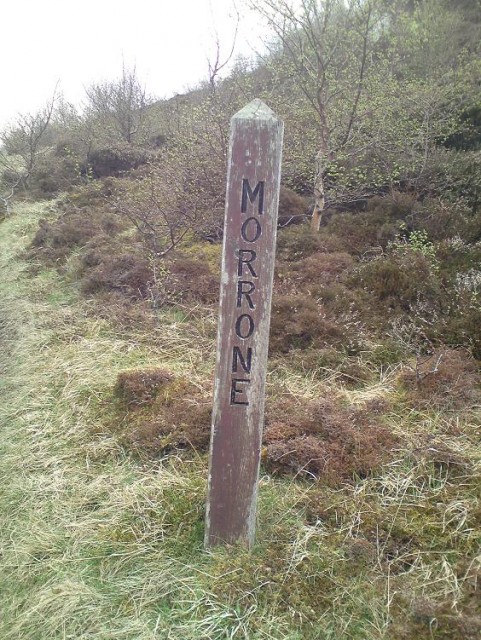 Just so we knew where we were. 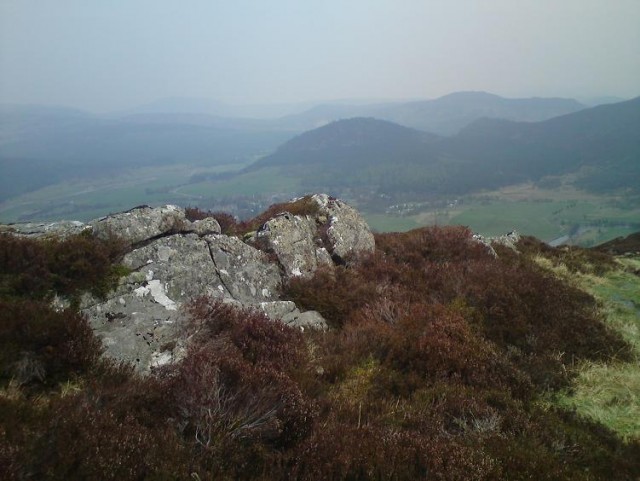 We reached a gate and passed through into the moorland and carried on climbing. The highest walk we had done so far was the Tap O'Noth and that only takes us 50 mins roughly to climb up, yet here we were nearly an hour into our walk and still up the side of this lovely hill. Everytime we stopped, we turned around and saw the most amazing views of Braemar and it's surrounds. The sun started to come out too, making photo taking impossible as the haze ruined almost every photo. We need to update our camera to something decent with a proper lens!! Rick had a look at the walk description and we kept looking up the hill, hoping to see the rock piles that would mean we were nearing the end of the climb to the summit. Eventually we reached them and sat down for a drink. It was clear that this would be a great day for us. The views of the surrounding hills covered in snow were sensational and we could just make out Loch Callater (a place we both love) in the haze. 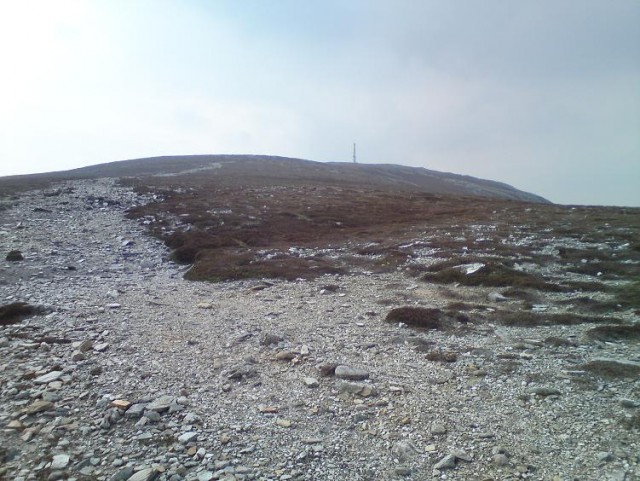 At the rock piles looking up.

The last part of the climb was great. Very rocky, yet very enjoyable. Knowing we were about to do what we set out to achieve made it feel like we were flying along this section.

At the summit, we thought we were alone until we heard a bloke climbing the ladder on the mast trying to reach a dish up the top. We walked south and found a few rocks to sit on and admire the view towards Glen Shee and Loch Callater, which had just become visible through the haze. The light was changing all the time, and a breeze had picked up, so on went the light fleeces and we gobbled down our lunch before heading back to the trig point. We paused for a few moments to admire the hazy views across the Linn of Dee and then followed the 4x4 track across to the next hill, massively proud of the fact that we had bagged our first Corbett. 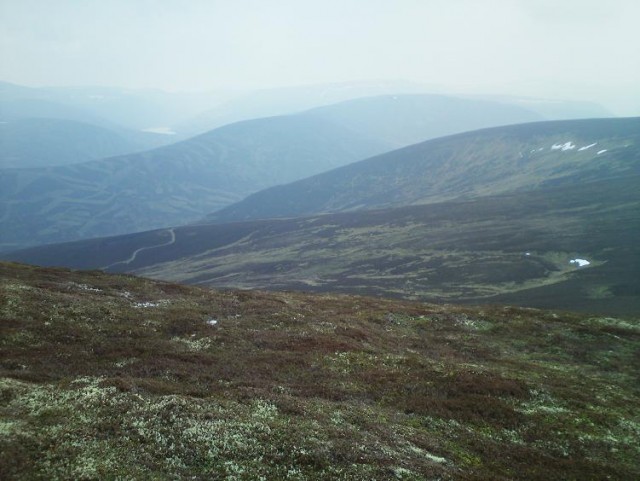 Wandering back down from the second hill, we stopped in our tracks when a startled Capercaillie flew out from the heather and started circling around and squawking, before hiding a bit further down the hill. This would happen a few more times from three or four different male birds. It became something of a wildlife trip during this section of the walk as we also saw a herd of Red Deer, numerous song birds and little birds and a dog on the neighbouring hill with some fellow walkers. We reached an S bend and stopped to take a photograph of the summit before heading back into Glen Clunie. 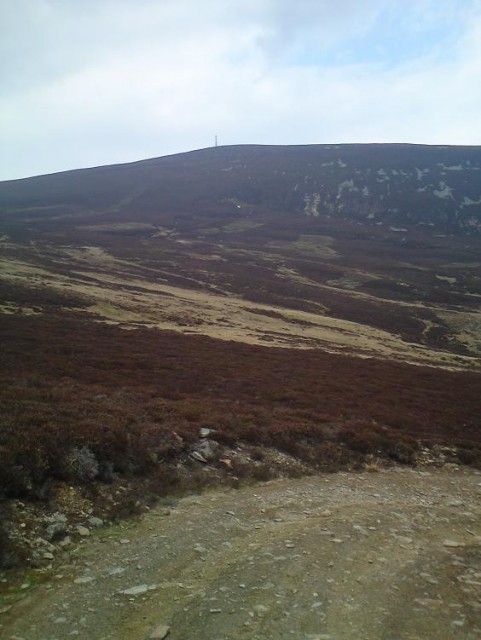 Wow, we actually walked up that?! 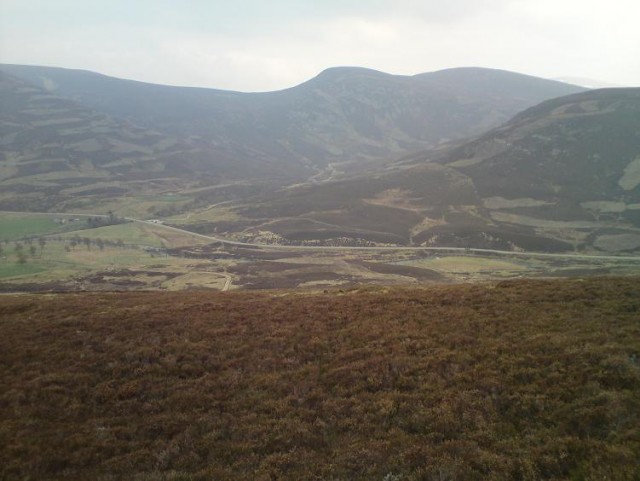 The start of Loch Callater's walk.

Back on the Old Military Road to Braemar, we wandered slowly along and admired the Oyster Catchers (Rick's favourite bird, other than Kamila) and some sort of Geese flying around and a little red squirrel watching from the river bank. We got a great view of the hills around Loch Callater and couldn't resist taking a few more photos of the stunning scenary we were in the midst of. 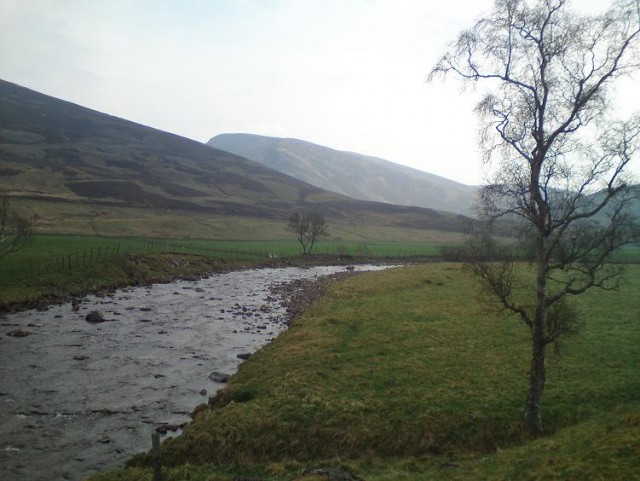 Love the scenary around here. 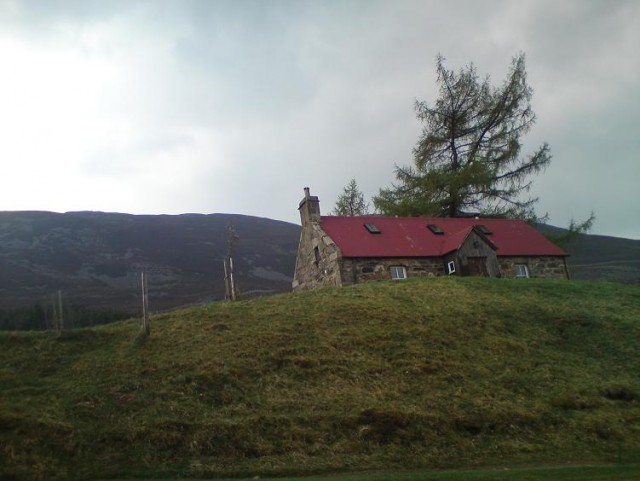 Back at the car park in Braemar, we both regretted waiting so long to finally climb a large hill and realise that we have definately caught the bug. We will do another one or two Corbetts in the coming weeks before having a go at our new dream, bagging a Munro. Will we reach 283? Probably not, but the hills are now a part of our lives and we can't wait to get out there and do it all over again. As they say, dreams can come true... and ours did today

Congratulations you two, always a great achievement to get your first (of anything) I love the report as I can really feel the enjoyment/sense of achievement on making the summit and the joy of the descent, well done