set off from the lawers hotel car park at 8:15 and headed east along the main road for a few hundred yards turning left at the horn carvers cottage and heading up the farm track then through the woods.not much chance of losing your way here as the farmer has plenty of signs so you dont wander.a good walk in here but with no breeze it was like an oven in the trees.after cosssing a large stile this brings you out to in the open with fine views up to meall greigh. 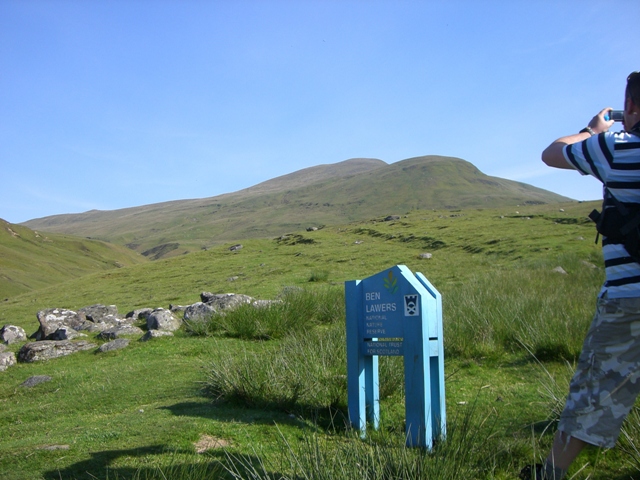 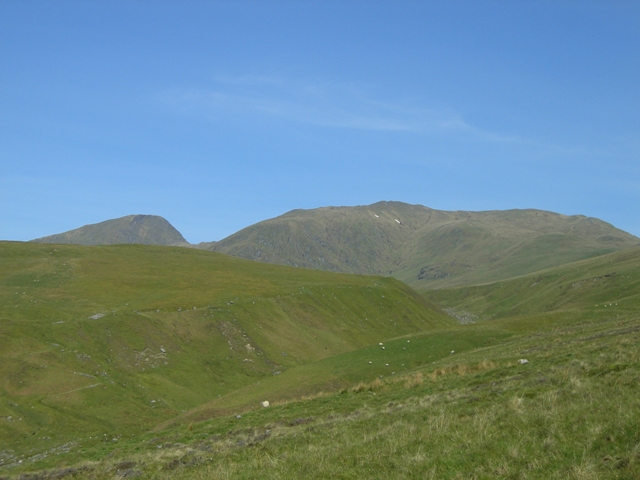 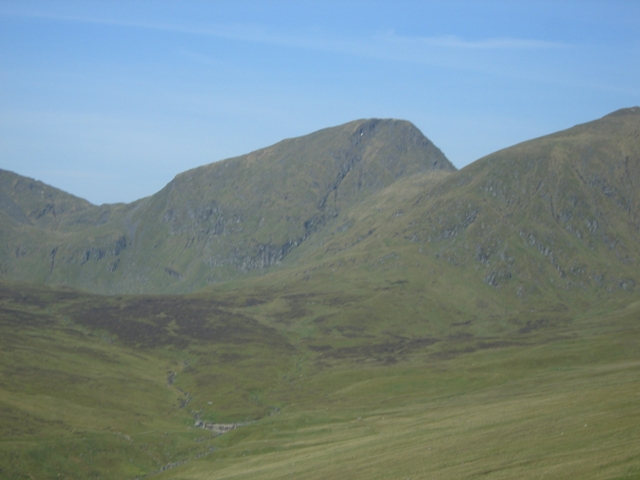 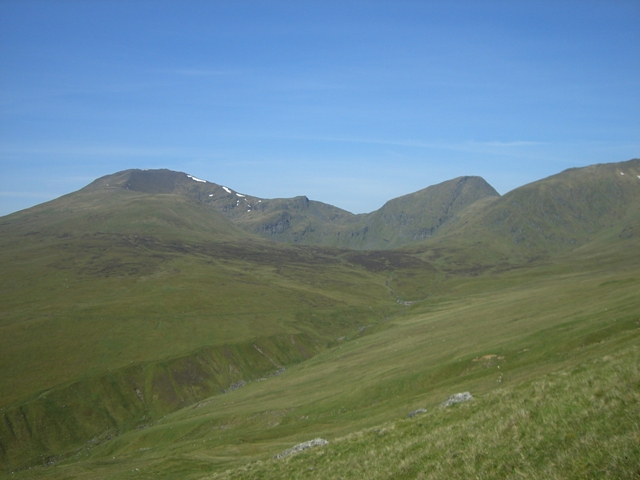 on reading the directions from this site it says to follow a stream which is further along the path we decided to climb straight up the slopes of sron mhor,bad idea in the heat.this was the hardest part of the walk the climb is relentless and very testing on the calf muscles,plenty of stops required here and if one of the other 2 had said to turn around i might not have argued.
after a long 2 and a half hours we finally reached the summit of meall greigh and the moans and regrets were soon forgotten with the cracking views to loch tay and ben lawers 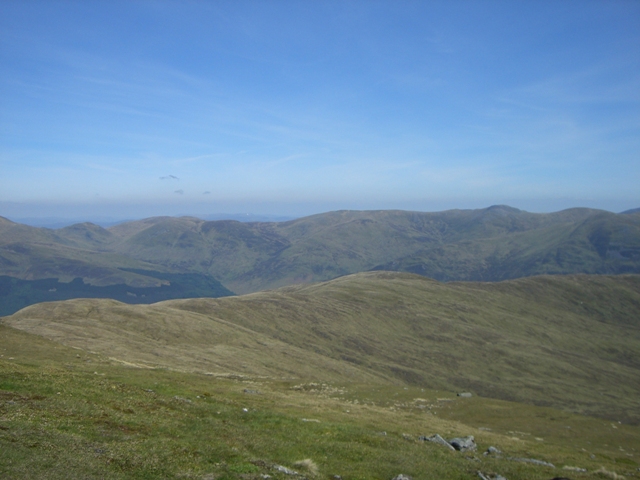 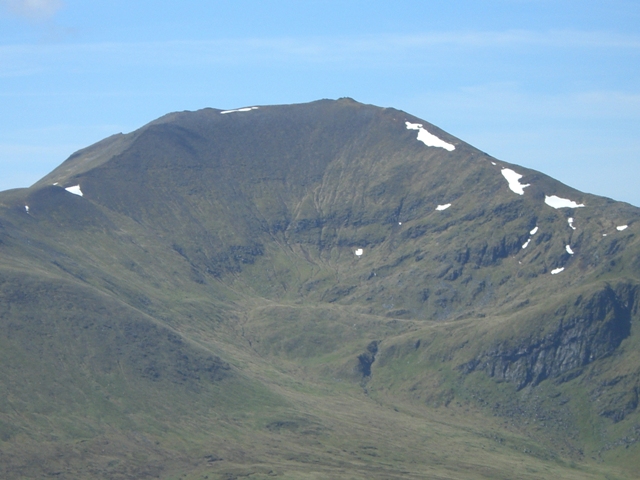 after a good rest here it was on to meall garbh with us all agreeing that the next 2 hours where probably one of the most enjoyable walks yet from the top of meall greigh right over to an stuc.the climb up to meall garbh looks really steep but its not as bad as it looks and was a great climb to the top 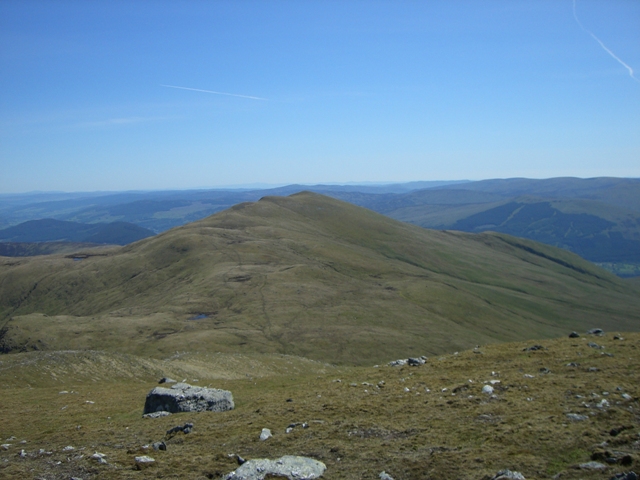 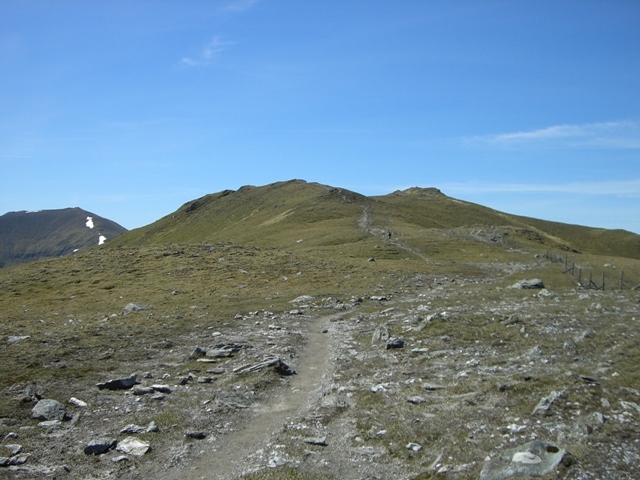 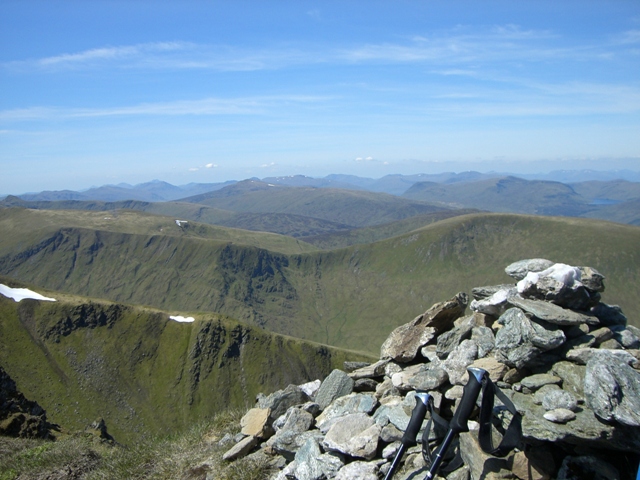 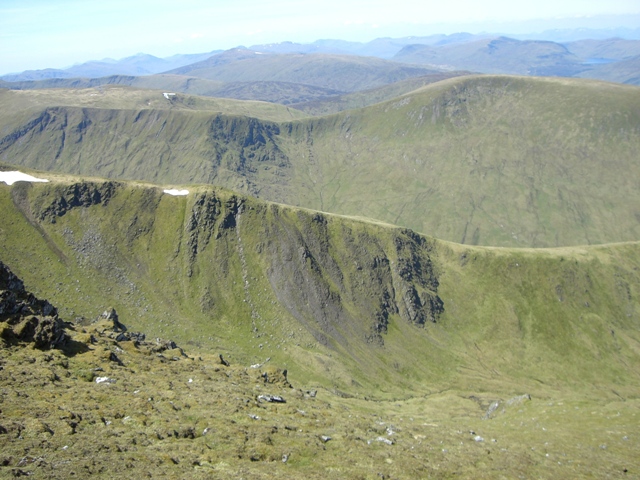 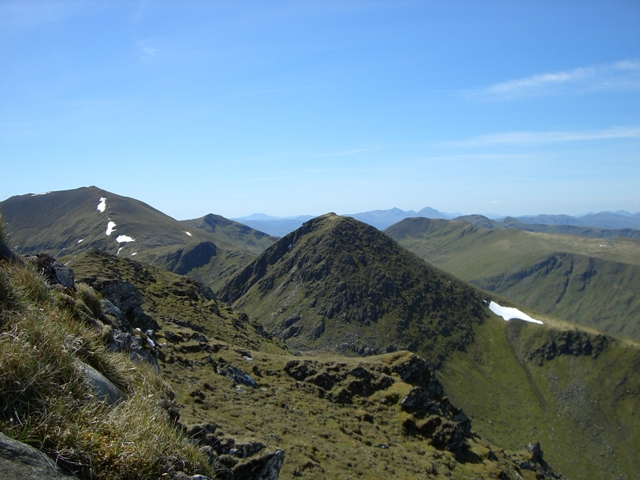 another break here and couldnt help but worry about an stuc.the view from meall garbh looks very daunting with what looks like an impossible climb but couldnt wait all the same. 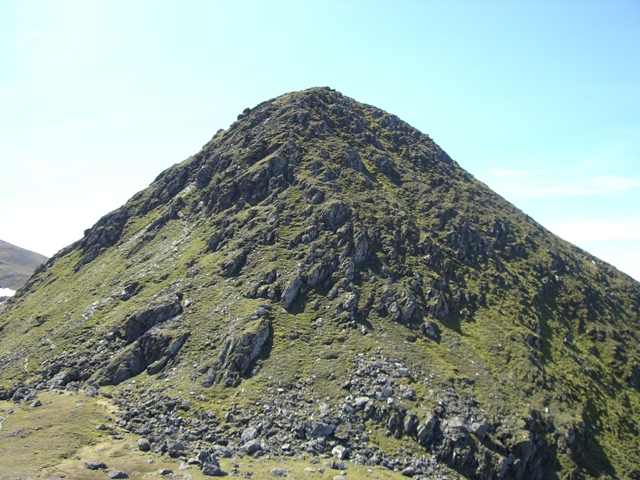 the next 20mins or so was very exciting having never climbed anything like this before but we stuck close together and where up in no time.not as bad as it looked but still a few squeaky bum moments

on reaching the top we all had a right feel of acheivement,no bad for a couple of amateurs. 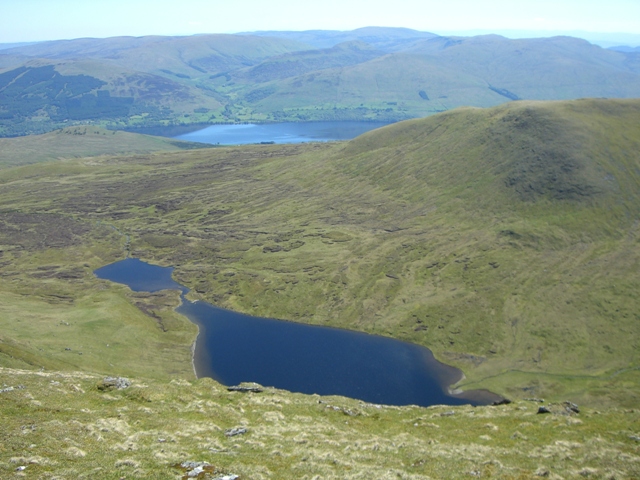 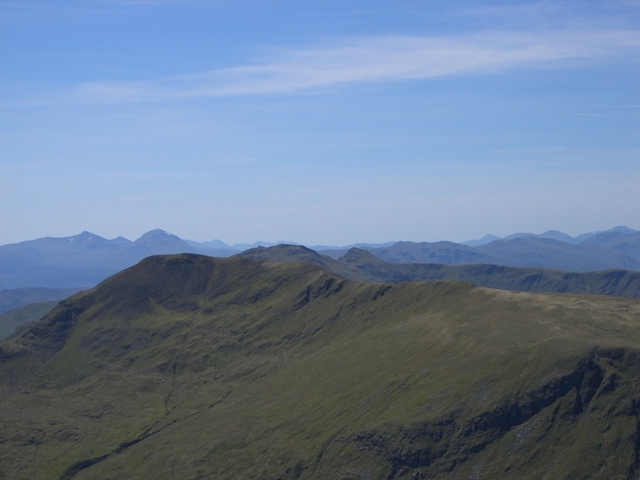 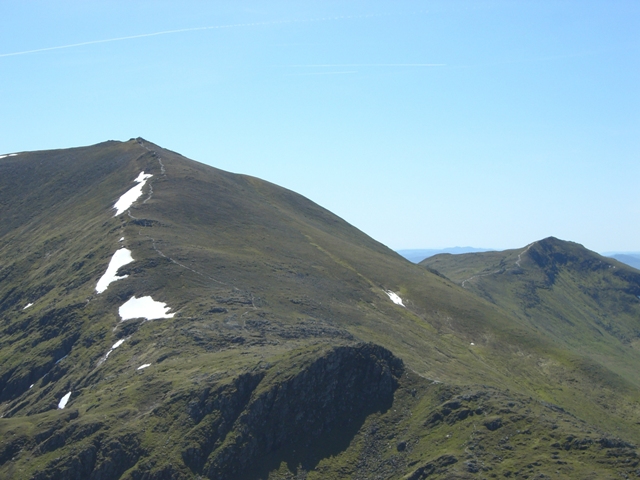 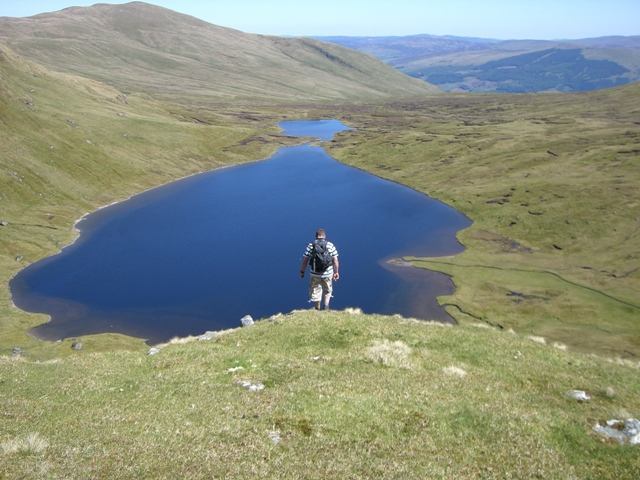 really tricky here as the slopes are very steep 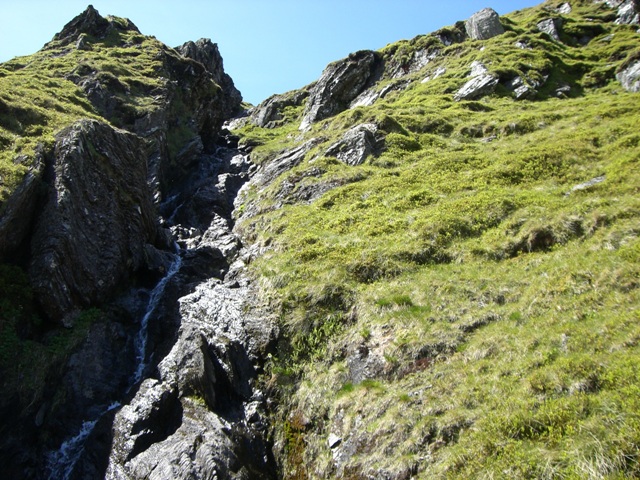 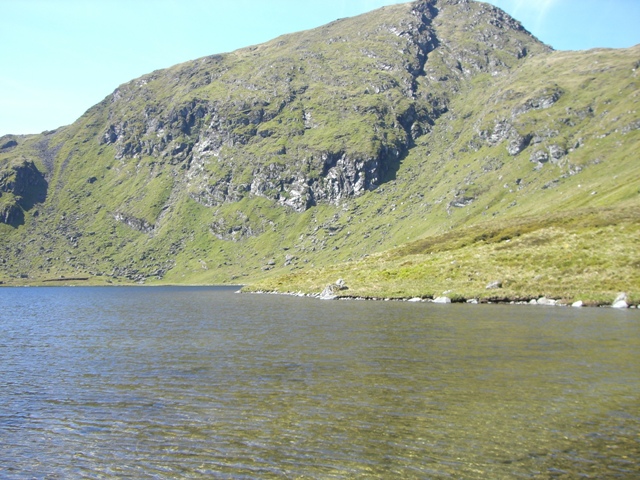 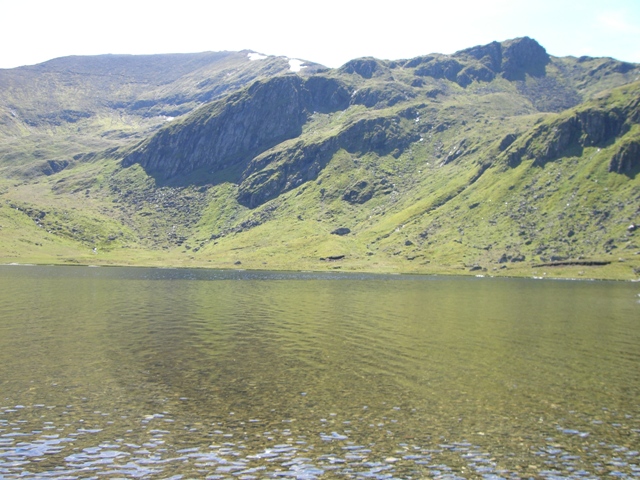 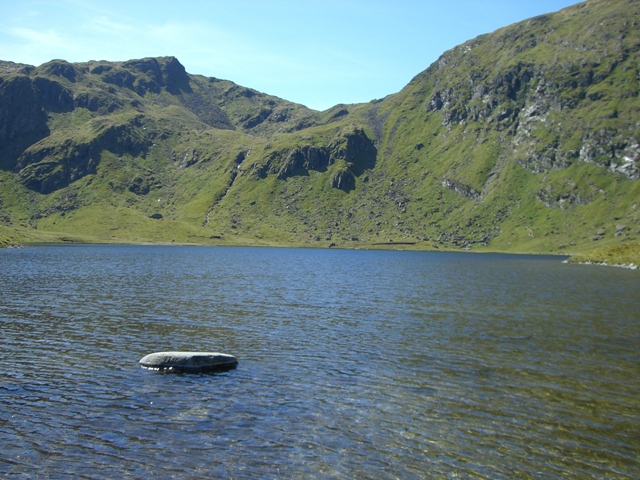 the next hour or so was a real slog through the bogs and now couldnt wait to get back to the car.
once the small dam is reached the path back wasnt to bad but was just compleatly knackered all the way back to the hotel with the promise of a pint really getting that close i could taste it.
on reading you have to pay to use the car park which seems fair enough i dont think it would have mattered as it was the best 2 pints of lager ive ever had (not driving

Nice report Alan loking to do these soon

hope you enjoy cj and have good weather like me.
my best walk yet in the lawers range but the clear skies obviously helped.
wouldnt fancy doing it in poor conditions as an stuc could be tricky

Cracking report and photos Alan, what is that weather like at the moment

An Stac certainly got my heart racing too

Great photos - thanks for the one of 'An Stuc from the Bealach' - I was wondering what that looked like. If you (or should I say I) don't like the steep ascent/descent, what are the chances of going up and down the easy (Ben Lawers) side and then traversing round the back under it? Anyone know?

couldn't believe my luck on my last 2 trips,really enjoyed the sunshine.it was good to see where i was going for a change
enjoyed an stuc also the walk over meall garbh

We did the same circuit on 31/05/09 and both the walk and weather were fantastic . Unfortunately I did not notice until we were on the An Stuc top that my camera had slipped off my rucksack when we had stopped for lunch at the top of Meall Garb. I asked people who were behind me if they had picked up my camera but no luck. I am leading a group up Meall Garb on 16/08/09 so I will see if my camera is still there then!! So it was great viewing your photos.

sorry to hear about your camera gregor
unfotunatley we were first on the hill on sunday so you must have been behind me.
i saw a group on top of meall garbh from an stuc it might have been you

i nearly had the same problem when i realised i had my spare memory card in the case.its got 500 pics on it mostly of the weans.i was guarding it with my life in fear of a doin off the wife

hi allan
i walked from the v/c at lawers up to lawers nice to see the rest of the route on to an stuc etc
check out my report...