Rewarded for ignoring the forecast on Bla Bheinn

Rewarded for ignoring the forecast on Bla Bheinn

Blabheinn-300522.gpx Open full screen  NB: Walkhighlands is not responsible for the accuracy of gpx files in users posts

We had sat at the campsite in Broadford the night before, nursing our beers and reading over half a dozen different forecasts. One read something along the lines of "No visibility, Cloud and rain. Possible excellent visibility on coastal hills". This slightly ambiguous appraisal suggested the meteorologists 'didn't have a scooby' what was going to happen, so the decision was made to have a go at Bla Bheinn regardless of the the weather, What else are you going to do on a Skye Monday morning?

After a leisurely breakfast we were leaving the car park at the head of Loch Slapin. The sky was overcast and the summits were still shrouded in cloud, but the rain had gone off. The path starts off initially with a gentle ascend, following the gully and waterfall. After fording the river the path steepens, heading up to Fionna Choire. The cloud was slowly clearing and patches of blue sky could be seen. We reached Fionna Choire and enjoyed some lunch before getting to the nitty gritty. Cutting up, just prior to the large boulder, the rough path eventually led to a scree filled gully where the going became considerably tougher! I had previously been under the impression Bla Bheinn was Skye’s equivalent to Ben Lomond. That may be the case relative to the Cullin ridge, but it is still a hill that can present serious challenges in its own right.

After what felt like a short distance, but long time negotiating the gully, the going become easier and better progress was made.

We were soon rewarded with views towards and Rum, Eigg and Muck. Rum dwarfs the other islands (excluding Skye obviously) and my thoughts turned towards a visit to the Rum Cuillin someday. 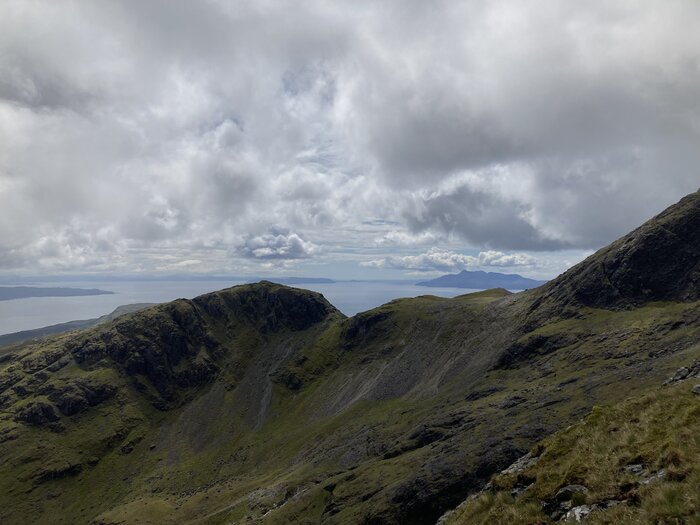 The clouds were now thinning, or just skirting the tops. With great views continuing, we decided that even if the summit as in the clag, the weather had still been kinder than could possibly have been anticipated.

Happily things turned out even better and as we negotiated the rocky ground to the summit the full glory of the Cuillin came into view, with cloud just touching the tops. I spent about half an hour drinking in the views and taking photos in order to send messages of a ‘na-na-na-na-na’ nature to friends.

The possibility of visiting the south top was briefly discussed then dismissed. It had been a better day than we could have dreamed of but none of were at full hill fitness, better to quit while ahead. 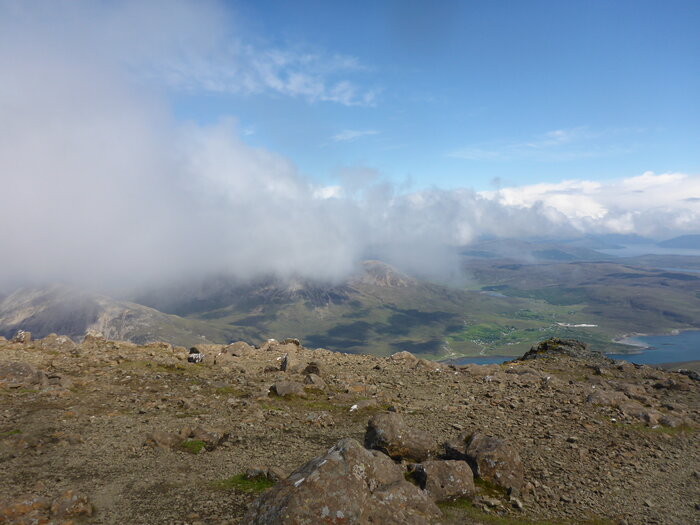 The return down the gully as even more torturous than the way up, and the more solid ground was reached with some relief. We then descended via the same route back to the car park, a great day, but my first experience of Skye was going to be hard to beat.