aonachbeagfromcorrour.gpx Open full screen  NB: Walkhighlands is not responsible for the accuracy of gpx files in users posts
Disclaimer: to be able to do this route in one day and catch the last train back to Glasgow, I had to run most of the way along Loch Ossian. Please note it might not be possible and therefore you should consider camping or staying at Loch Ossian Youth Hostel.

I took the Caledonian Sleeper train from Glasgow Queen Street at 05:48, arriving in Corrour at 08:58. Time was certainly a constraint today since the last train (also Caledonian Sleeper) would all at Corrour at 20:52. I had a window of exactly 11h54m to make it back — a challenging expedition but I was so ready for it. Views over Loch Ossian and the Youth Hostel

I decided to go walk along the west side of Loch Ossian. It must have been around 16°C, but given the lack of wind, it felt much warmer. The views over the banks of the loch, and across to the hostel, were idyllic. The Hostel through the Loch

As I kept walking, the ETA on Google Maps for the walk to the Corrour Estate were thankfully reducing, I was trying to keep a steady walk, every minute counts!

That said, I couldn't help myself but stop to take photos along the loch. The lack of wind meant incredible reflections too. Finally, I had made it to the Corrour Estate in about 1h35 from the Corrour Station - The base of the munros was in sight. Almost at the base of the Circuit

Now walking past the Uisge Labhair Powerhouse, used for the Hydro Scheme in the area. I was convinced it was a bothy when I saw it from the distance for the first time. The track road had pretty much finished and it was a bit of a slog from there onwards. I did take the opportunity to refill my bottle, I had pretty much drunk 1.5L of water just to walk along the loch, it was scorching, to say the least. The end of the Hydro Scheme track

It was finally time to ascend Meall Glas Choire. Exhausting at first (of course it was), but the views back over the trodden path started to open up and I got that wee bit of motivation I needed. 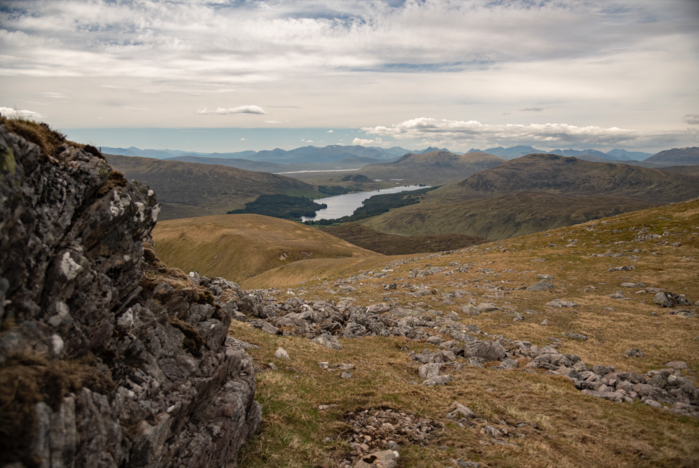 The views back over Loch Ossian

I was now on the ledge towards Beinn Eibhinn — the first munro of the day. Reaching the cairn had taken me 4h since I hopped off the train. However, I did not linger much. A few photos and I was onto the second munro, I could not believe how close it was haha Summit of Beinn Eibhinn - Overlooking the next 2 munros

I was about to descend the Càrr Mor ridge towards the second munro. Photo first! The ridge was stunning. Looking towards the next two munros

And, in only 25 minutes, I was on the second munro of this circuit - I could not believe how little it took. I was feeling very motivated, so I just went for the third one. On the way I met 3 walkers who were doing the route from Culra (the hike stated on WH's official hike description). I stopped for some water and photos, and after 25 minutes, I was on the third summit. The views back over Aonach Beag and the hills in the distance were incredible.

I had 7 hours left before catching the train, so I was in a massive dilemma. In any other hike, 7 hours would have been more than enough, but I was aware of how far away these hills are. I could not find any information online about doing this circuit from Corrour. Everything you could read was from the Culra Bothy, which implies an overnight camp. My insecurities were high to say the least. Buachaille Etive Mòr and Beag in the distance

After dwelling on it over lunch, I decided to go for it, so I started walking towards the 4th munro, but first, I needed to refill my bottle, found the perfect spot for it. Then, I started descending through the ridge. The views were superb!!! The last snow of the season and the Ben Alder hills

The lochans on both sides of the ridge were beautiful too, here is the one near Ben Alder: Loch and Sgòir: Not to mention the views back on the ridge I just came down from! I had finally summitted the fourth summit - I was elated, but also concerned about the train. A bittersweet achievement, knowing there were no spaces at the hostel and I had work the next day (let alone the fact that I had no tent nor food for the night haha - at least it was warm enough).

I will be honest: from here onwards it was all iPhone photos because I was in a massive rush, I decided to put my camera in my rucksack and power through. Here's two quick snaps from the last summit: Looking down on the Culra Bothy

I was now descending towards the stalkers path described on the official WH's route, used for the the way back towards Culra bothy. Once on the path, I was counting every minute, I set myself small targets (I should get here by this time, etc.) - I finally ascended the last section up the way: Bealach Dubh.

A daunting sight: Loch Ossian and the Corrour Station 10km | 6.2m away. Oh boy, I wanted to greet hahaha. It was so, so far away. Still, I was feeling confident. I still had another 4h to go before the train, so I decided to go for it.

Then I walked some more.

I was now walking along the river, hoping to reach the hydro tracks where the munro circuit started, but I was exhausted. I sat down, put my head under the river to cool down, and looked back the way. It was beautiful, but I definitely did not see that at the time. Once I reached the tracks and reached the Corrour Estate, I decided to run. The first 5 metres were an absolute laugh, I thought I was going to collapse. I do think that knowing the train was now due in 1h40 made me power through.

I barely had signal, so I could not check what the ETA would have been from my exact location, but I decided to walk along the west bank of the loch again, in hopes that a car (perhaps the staff at the Corrour Estate or the Station House) would appear and I could get a cheeky wee lift.

The last 5 miles were strenuous, my feet were on fire. I was exhausted, especially when I saw folk on their bikes happily cycling past me - I was so jealous haha

Finally, I made it, 15 minutes before the train, I was elated. Almost 12h after, I was back at the station just before the train

P.D: and I got two Mac n Cheese on the train - made it all worth it.

Re: Aonach Beag Circuit from Corrour Station in 1 day

Re: Aonach Beag Circuit from Corrour Station in 1 day

Hahaha I agree - I guess a bit of snow on the top of the hills would have made it look even more Canadian, maybe a moose