All der six in a day, bike and hike !

All der six in a day, bike and hike !


Distances are for the walk only. 15km bike in (1.5hrs) the shoogly bridge way and c14km back on the direct path (1hr 10mins) which is more technical but shorter and has less up and down for sure. There is a metal hay bale holder at the left turn for the narrower track, on the way in from Dalwhinnie.
Effing new roadworks on the way into Perth (8 weeks from 13th June) meant queueing from pretty much the M90 then a broken down vehicle near Dalspindal made this a more tortuous journey up from Edinburgh than anticipated, having left at a realtively civilised 7.25am; when the boy missed the turn and went the long way around on the bike I was pretty frustrated but hoped that this meant that bad things coming in 3s had happened already. We had looked at doing a big round trip starting at Corrour and going anticlockwise stopping overnight at the bothy but plans changed with Beinn na Lap now planned as our last munro (10 to go after this trip). Thankful for a relatively short drive for a change as well, easier on the wallet ......
Again my suunto's battery packed up before the end but I'm not buying a new one with only 10 to go so the end of the journey is a little less detailed. Here is what I have but ignore the totals, the 15km bike in is included, for example but no data at last munro. part of route, thanks Suunto serves him right for missing the turn

Bike into Culra, parked the cars on the Ben Alder side of the FB. The long way round and shoogly bridge is not the smart way to come to be honest, track is a mess in places and there's sand/mud at Lock Pattack. The direct, narrower path is not very tricky at all and is much better. Left car at 9.30am, magicked overselves to the other side of the railtrack and we were walking at just before 10.30am - nice drink and first refill from the river. Weather Gods smiling and not a midge in sight !!
Had decided to go clockwise so that we could slither down the grassy slopes using the bothy as a bearing and drop onto bikes quickly thereafter. I should say now that the down and up from Ben Alder to Beinn Eibhin is pretty brutal but it would be no better the other way around. Culra is c450m up which gives a head start on the ascent.
The track up to Beinn Bheoil is clear much of the way, small cairn marks a left turn up the hill then turn right at a wee "t junction" but then you have to take your own line up onto the main shoulder/spur for BB. Once up it's a nice walk up to the top and Ben Alder looks pretty imposing across the coire. There's a bit of down and up before the main bealach and not much of a path (if any) across to the ascent of BA. Bits of path head up and then there's a bif of plateau before you summit BA. Large worn trig point there, as noted by other writers. By now we were at about 1100m of ascent and a wee bit less than 3hrs of walking. Sunny skies so hat was on and sun cream applied. Bit of wind so kept us cool but mainly t shirt weather. 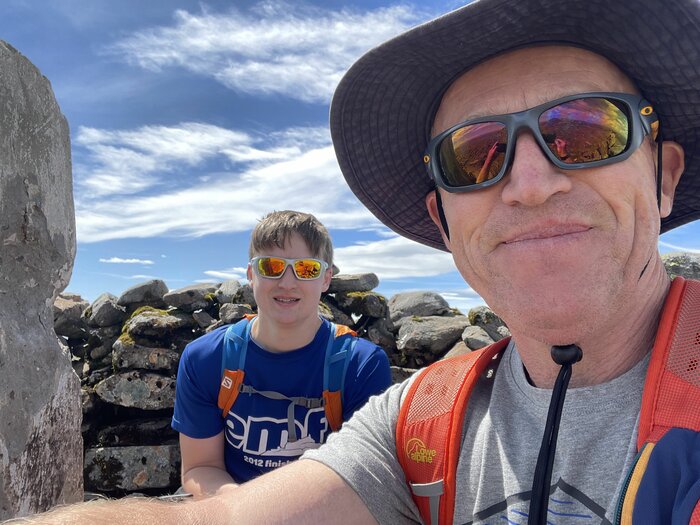 Looking across to Beinn Eibhinn is on OMG moment, looks like a very long way away but we knew that when we got there we'd be knocking off three pretty quickly so spirits would pick up. I had pencilled out a route on my map (OS Explorer) so we took a line/bearing WNW ish to look for a safe drop down to the main track between Culra and Loch Ossian. As it happened we found an easy drop down into Coire na h Eiginn bearing south of Meall na t Slugain and onto the path, dryish heather and grass interspersed with patches of bog. This is where looking at the map is helpful but being there is definitive. Walked along the path a bit but it heads up and in the wrong direction so bushwhacked down to the river for much needed water and refills. No paths to be seen so followed the Allt up towards the main coire on the left/west before deciding that heading to the bealach was a waste of time, rather just head up the shoulder/spur heading towards Carr Mor. I think that was one of our smarter decisions, we came out only about 0.5km or so from the bealach and just a bit higher (c40m or so) but much more direct). Parked our bags and headed for number 3 of the day, pretty flinked by now, the bash up from the path was indeed brutal, we had gotten down to just under 600m before heading back up.
So, next question, which of the BE tops is the munro ? Both are marked as 1102m - we decided we should do both to be safe and there was only 150m/200m between the two so not such a big deal. Seeing Aonach Beag so close by was a pleasure. Took us less than half an hour to get to it, this section does have a path and we saw a rough track heading down from the bealach so there must be a faint/partial path down there. The small drop here is also a godsend as the "up" is much shorter. 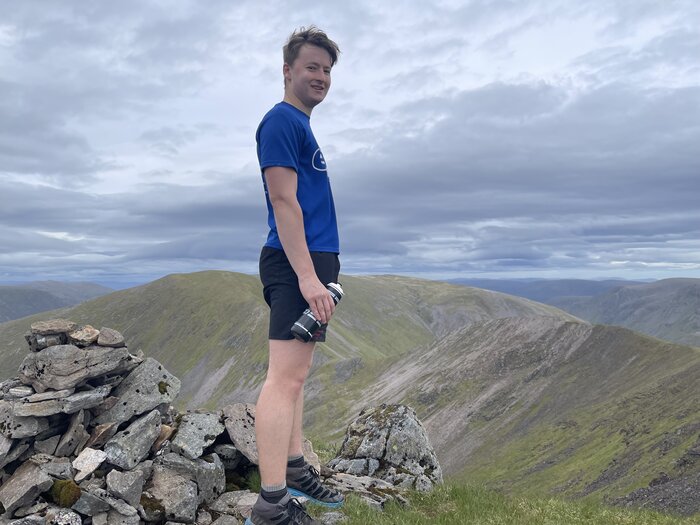 More food at AB, water was working well in terms of being able to refill before coming up this side. Was glad we had left the dog though - between the bike in/out and no water up here then SSPCA would have a decent case against anyone dragging a dog in and out in a day. AB to Geal Charn is another small drop, you don't get below 1015m so onyl 100m or so to drag yourself up to the top of GC. By now we were feeling pretty darn good even if legs suffering on the uphills. Now a wee bit of care needed, a bit of clag had appeared. I knew there was a path down off the steep section at Aisre Ghobhainn but we needed to find it. Boy wanted to head towards Aisre Cham but quickly realised "d'oh". There is no clear path across the plateau so get your bearing right ! Once you get to the top of the Aisre G section you will/should find a path, it's one you'll be pleased to see.
Once off that it's a piece of cake (barring tired legs) across the plateau, down to about 900m before the final drag to Carn Dearg, took just less than an hour from GC. Head off it bearing NE at first for an easy-ish start of the descent, then pick a line between boulders etc heading East and you'll drop down onto the bothy. stag chewing the cud, oblivious to us, just off top of Carn Dearg pleased to have bagged the six, time to head home

8hrs walking almost bang on when we got back to the bikes. Lots of lovely water (we were pretty much out by now) before saddling up for the ride out. The clag had settled on Ben Alder but pretty clear apart from that, few midges to be seen on the way out but none could keep up with the bikes. 1hr 10mins to bike out including a wee bit of pushing and a water stop.

Nice report. I'd been considering these for an epic bike n hike, just wasn't sure if it was going to be one of my more adventurous plans that end up going horribly wrong, but 8 hrs walking with a couple of hours cycling sounds dooable to me. Just need to wait for a good weather window.

Nice one! This really is one of the finest places in the Highlands. The cycle in really gets one out into wilderness. I see you did the round in your customary double quick time! It took me a good bit longer, and I cycled out the previous day, and back the following morning - my excuse is that I included a couple more of the hills

(You may recall we met on Bheinn a' Chreachain a few years ago, when your son was quite a bit younger!!!)

Alteknacker wrote:Nice one! This really is one of the finest places in the Highlands. The cycle in really gets one out into wilderness. I see you did the round in your customary double quick time! It took me a good bit longer, and I cycled out the previous day, and back the following morning - my excuse is that I included a couple more of the hills

(You may recall we met on Bheinn a' Chreachain a few years ago, when your son was quite a bit younger!!!)

Yes, we remember you well and occasionally say to ourselves “alteknacker would likely add those hills over there and take the bee line” ! One of the joys of meeting folks - 19yo boy remembers you from when indeed he was much smaller. Was in affric a few weeks ago, wilderness territory as well, need to pop back there to nab Tom and Toll. All the best to you.

J888ohn wrote:Nice report. I'd been considering these for an epic bike n hike, just wasn't sure if it was going to be one of my more adventurous plans that end up going horribly wrong, but 8 hrs walking with a couple of hours cycling sounds dooable to me. Just need to wait for a good weather window.

These long days help but weather all over the place again. Hardly saw a midge until the way out !