My walking resolution for this year was to get the tent out when the weather was good for some wild camping combined with a few of the more tricky munros (and other summits). This is a route I had planned for some time and seemed a good one to start my wild camp season.


LochanFada.gpx Open full screen  NB: Walkhighlands is not responsible for the accuracy of gpx files in users posts
After a painfully slow trip up the A9, I reached Incheril about 3pm and set off with full pack for Heights of Kinlochewe and Gleann an Muice. It was warm and very hazy but there was just enough breeze to keep me cool. This is a nice easy walk-in on good tracks at easy gradients, ideal for re-aquainting myself with a heavy pack. Beinn Eighe was nicely framed behind me and this would be a great photo in clearer conditions. Gleann na Muice is part of a large regeneration of native tree and plant species and (as I think Kinley said previously) should look good in about 30 years! The landscape was dry and last season's grasses looked scorched - it reminded me of southern Colorado more than Scotland. The track climbed steadily through this glen but the breeze was at my back and I was at the high point after about 2 hours. There were a couple of other solo tents but plenty room for the three of us. The evening breeze died through the night and I had a good sleep. 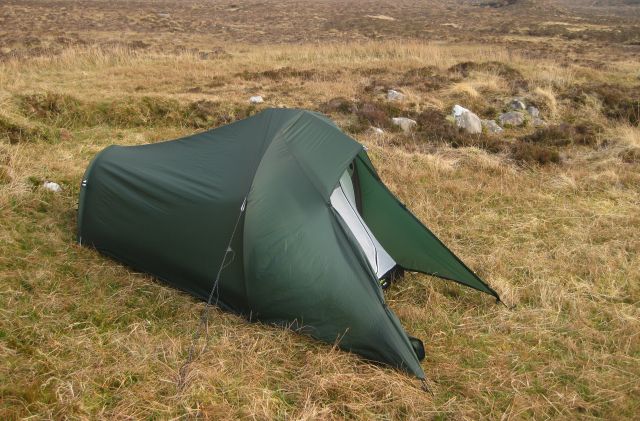 The previous evening I had spotted a bit of a path leading around Creag Ghlas Bheag at an easy gradient on some nice dry ground so decided to follow this for my ascent. The going was easy on dry cropped ground and sandstone slabs and I was soon nearing the col below BT passing an attractive lochan en route. 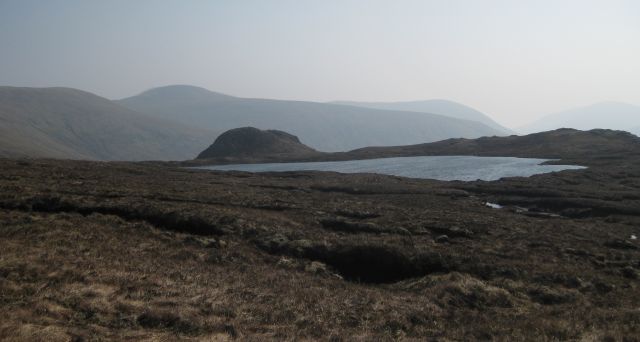 I took the chance to refill my water bottle at the small waterfall at the head of the Allt na Creige Glaise knowing there probably wouldn't be any water on the higher ground. MCMF looked impressive from the col and I was happy to see a bypass path skirting round Meall Garbh (MG). My older SMC Munro book describes a route over this hump in both directions - no thanks The strong breeze blew me up the final 200m to the summit of BT. This was a fabulous viewpoint to A' Mhaigdhean and Ruadh Stac Mor and to the MCMF/Sgurr Ban/Beinn a' Chlaidheimh ridge, although the haze spoiled any longer distance views. 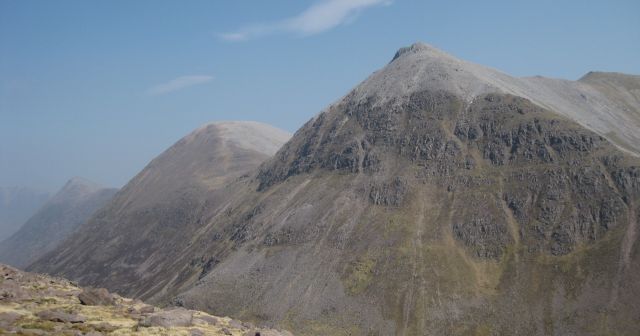 A lazy break ensued overlooking the interesting north western ridge of BT. I descended quickly back to the Bealach Odhar and followed the bypass to the slightly higher col between MG and MCMF where I had another break next to a trio attempting the Fisherfield 6 in a clockwise direction. It was just 250m to the summit of the 2nd munro but the ground was rocky and the breeze was strong enough to make footing a little tricky. Still, it was just 25 minutes 'til I was at the summit where I chatted with another couple of walkers who had been camping by Loch an Nid. Again I took my time soaking up the sun and enjoying the views across the Fisherfield wilderness. 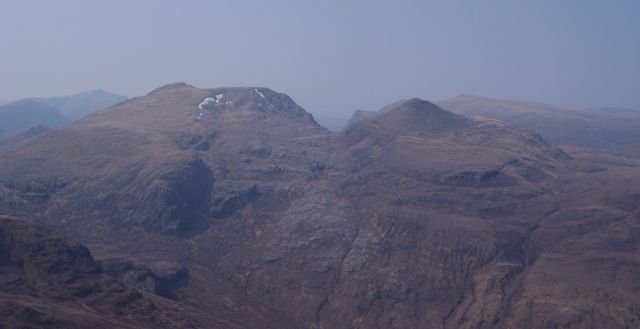 The return route needed some care but once past the Bealach Odhar, the going was very easy. Rather than reverse my ascent route, I followed a direct path back to the tent above the impressive gash formed by the Allt na Creige Glaise. I wonder how different this walk would be in damper conditions? 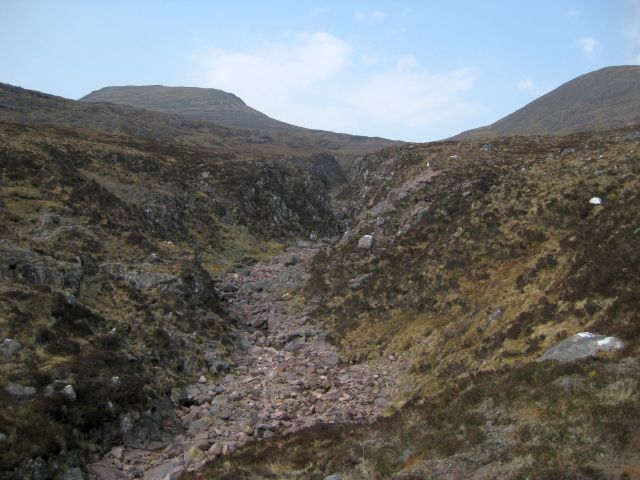 It was just before 4pm and I had a decision to make: relax and spend another night in the tent or walk out now? I was feeling good and rain was forecast for the morning so I decided to walk the 11km back to the car. It was a warm evening and the wind had died but I was in power-walking mode and just 2h15m saw me back to the car. I would have liked to have taken my time a bit more but I had to book my room for the night at the in-laws at a decent hour!

This was a fabulous excursion into a wild and remote place and I was lucky to do it in such fine conditions. I can't wait to return to tackle some of the other Fisherfield munros

Excellent report Leithy....
Fantastic area to wild camp in. (not that I have done much wild camping yet). Pictures brought back memories. Superb stuff

Great walk Leithy and some beautiful pics even with the haze, I can only imagine how stunning it must be on a clear day

I've camped a couple of times by Lochan Fada, great spot, was you by the stream that runs down from the hills to the North to the east end of the loch? Thats a great spot with nice short grass. Fantastic area

mountainstar wrote:I've camped a couple of times by Lochan Fada, great spot, was you by the stream that runs down from the hills to the North to the east end of the loch? Thats a great spot with nice short grass. Fantastic area

I was very close to that. The driest patch right on the stream was taken but I found a slightly more sheltered spot about 80m away

Wish I'd camped now when I was up here. I did a similar route for my penultimate two Munros, although I went up the Sgurr Dubh ridge onto the Mullach (which is highly recommended by the way). I cycled up Gleann na Muice though, which made a slightly shorter day of things (although in retrospect, the more time spent in this area the better).

marvellous. Reminded me yet again why we love the hills and the wildeerness!

Your brilliant report must surely make everyone want to wild camp - the view from your tent in the morning was absolutely stunning.

If I hadn't cottoned on to the fact that this wild camping thing can be good, I definitely have after your report leithy.

Cracking report and makes me want to get out and try it.... hopefully soon.

Some stunning, rugged scenery you've captured, what a place , love the photos!