My friend did raise an eyebrow

when I announced that I was going to have an easy weekend and just do the Ring of Steall and a couple of other Munros in the Mamores. I can see why now! (What I meant was that I didn’t want another long walk in carrying camping gear.)

I did find the Ring of Steall quite tough, especially in the heat of last Sunday. The walk up Glen Nevis to Steall meadows is superb and gives a first glimpse of An Gearanach above the Steall Falls. There were some people messing about on the Steall Bridge so, patience not being my strong suit, I opted to cross on the stones. First mistake of the day. Half way across I realised the water was deeper than I thought but I couldn’t turn back with all those people watching so I started the day with wet feet!

After crossing at the bottom of the falls (feet no wetter!), you go round to another small burn, cross it and go up a good zig zag path alongside it. This goes up into a corrie before crossing back over the burn and eventually reaching the ridge of An Gearanach. The views behind of The Ben, the Aonachs, Glen Nevis etc make a good excuse for frequent stops. Once on the ridge you can see quite a lot of the rest of the Ring. The ridge continues steeply and reaches the cairn at the summit of An Gearanach. A narrow rocky ridge leads to An Garbhanach and there is some easy and enjoyable scrambling if you stick to it.

There is a path lower down that cuts out a lot of the hands on stuff but where’s the fun in that? A steep, eroded descent to a bealach is followed by a climb up to Stob Coire a’Chairn, the second Munro of the day. From there the way to Am Bodach is clear, down to another bealach and up very steeply again through rocky outcrops that provide a bit more scrambling if you fancy it. Am Bodach made a good stop for lunch and a good look at the surrounding hills. I spotted what looked like another excellent ridge walk to the south: then I realised it was the Aonach Eagach – not wrong there then!

Then across to Sgurr an Lubhair from which the view of Stob Ban and Mullach nan Coirean is absolutely stunning. 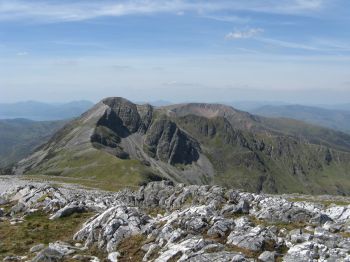 But that was for the next day. The Devil’s Ridge to Sgurr a’Mhaim was the next bit of excitement. Again if you stick to the crest of the ridge it is a good scramble but there is a path which avoids any “difficult” bits. Of which there is quite a tricky one. The name is rather more off putting than it needs to be though. 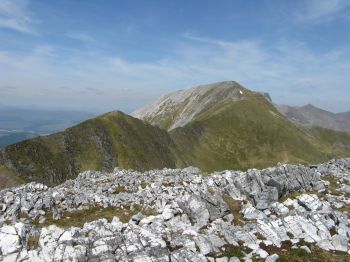 On reaching the large cairn of Sgurr a’Mhaim I rejoiced in the knowledge that it was all downhill from there. But what a hill! Steep, horrible scree at first, then a very badly eroded path all the way down. I didn’t enjoy it at all and my knees were screaming by the time I finally made it to the gate in the fence at the bottom. To make matters worse I could see my car(the little red one) from the fairly near the top, so near and yet so far. :evil: Then I made my second mistake of the day. I could see the path running alongside the Water of Nevis, going towards the car park at the end of the road so I decided to cut the corner instead of going down to the gate at the Lower Falls car park. Don’t do it! It is very boggy and there is a deer fence all the way along the path so I had to walk all the way back to the gate. Not happy!

But once on the path it is a pleasant walk along the river (lots of nice shady spots to sit and dabble one’s feet). The whole thing took me about 8 hours, including stops for food, photos and paddling.

After a night at the SYHA in Glen Nevis sgurr a'mhaim from near the hostel

I tackled Stob Ban and Mullach nan Coirean. This time I started at Achriabhach and walked up beside the Allt Coire a’Mhusgain. The midges were out in force. Initially the path clings to the burn but higher up it climbs and traverses the side of the glen below the Devil’s Ridge. There are several nice waterfalls and great views of the buttresses of Stob Ban. At the top end of the corrie the path swings right and crosses the burn and reaches the bealach between Sgorr an Lubhair and Stob Ban at a large cairn. Stob Ban looks very steep from here! But it is not actually too bad. From the path you can look down into the northern corrie (long drop) and across to Sgurr a’Mhaim and the Devil’s Ridge. After Stob Ban there is a sudden change in the terrain and a wonderful ridge walk leads round a huge corrie to Mullach nan Coirean. 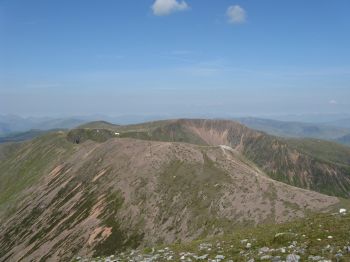 Again there is a lower path round some rocky bits but it is nicer to stick to the edge of the corrie. Way down below to the south is the West Highland Way. Sitting at the summit cairn eating cheese sandwiches I wondered how my knees would cope with the descent but compared with yesterday’s horrors it was fine. I uttered not a single expletive all the way down the N.E. ridge to the large stile at the bottom. Over the stile and into the shady (though rather muddy) woods. A vague path leads eventually to some steps down to a forestry track where you turn right. Keep straight on where there is a branch to the right (this goes uphill, not at this time of day, thank you very much!) and just after the hairpin bend look out for a good path on the right, with steps descending alongside the burn. This comes out in the glen a short distance from the car park.

It was a great couple of days. The Mamores have everything you could ask for: ridges, scrambling, great views, varied terrain, river crossings – and even some things you might want to avoid, scree and bogs.

Next stop The Grey Corries.

i will go up from kinlochmore ..get to the summit ..put some music on and take it all in...a summers day soon..

its more magical if you can believe me

cheers for a gr8 trip report

Haven't done the Ring of Steall and possibly never will but, in case I do, that step on the Devil's Ridge - about how high is the bottom bit? That's the bit that looks most difficult if it's quite high - the rest looks okay really. I tried the An Gearanach to An Garbhanach but didn't manage the last bit.

The Stob Ban to Mullach nan Coirean was probably my favourite walk in the whole of the Mamores! I think the NE is the ridge we went down and, at the time, there was no way over the deer fence and we had to burrow under it!

Hi Doogz
I had already made up my mind to go back in the winter - it looks brilliant from your pics.
Hi Mountain Coward
The "interesting bit" on the Devil's Ridge is not that high, unless you count the long drop to the glen! However I wouldn't let that put you off because there is a path that you can use to avoid it.

I probably will have a go as I intend to do the 'top' (Stob Coire a' Mhail?) along the Devil's Ridge...