My day started with a 6 a.m. departure from Edinburgh and this was the scene that greeted me as I loaded my bag into the car... By 9 a.m. I was pulling on my boots in the car park at Chapel Bridge, Little Town in the Newlands valley in fabulous sunshine. I had walked over Cat Bells, Maiden Moor and High Spy a few weeks earlier but didn't have time to complete the horseshoe so that was my objective for the day.

After reading about the various ascents from Little Town I decided to head up over Scope End and High Crags to Hindscarth. I'm really glad I chose that route as it is probably the most interesting 2,000 ft ascent I have seen in the Lakes, especially the first 1,500ft. This ascent has everything: it's steep, fabulous views, a bit of light scrambling, a few scary steps along a thin path above a steep drop and then the steep climb up to Hindscarth summit. Great fun! Once on top of Hidscarth I was treated to the best views of Lakeland that I have ever seen. This picture of the Skiddaw Massif is the first time I have seen the entire range from one side to the other and from the bottom to the top from one place... 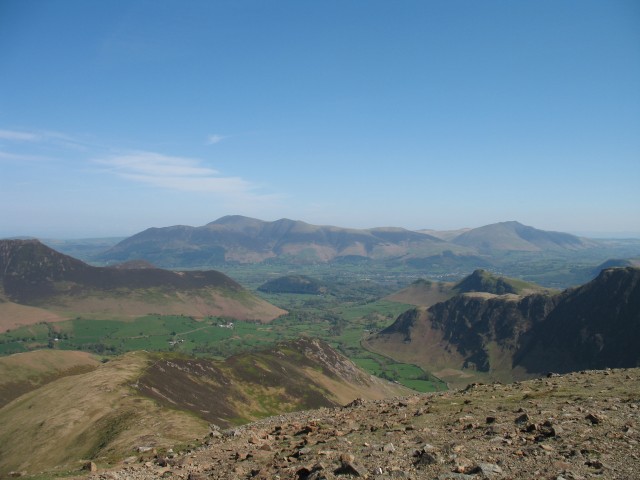 Next I was off to Dale Head, the tallest summit of the day. The route from Hindscarth is very straightforward and gets you to the summit cairn a lot easier than any of the direct routes up this big lump of rock. It is probably more satisfying to reach Dale Head summit from the Newlands valley or from High Spy via the steep path from Dalehead Tarn but I sacrificed that today having chosen to ascend Hidscarth first, and I still this that was a good choice. The panoramic view from Dale Head was stunning. Clear in all directions with great views of the surrounding fells and lakes. I took a 360 degree video and if I figure out how to post it here I will. After Dale End I retraced my steps back along Hindscarth Edge, over the ridge at the back of Hidscarth and then down and up onto Robinson. Again, this probably isn't the most exciting way to approach Robinson as it has a great-looking ascent from Newlands over High Snab Bank and the ascent from Newlands Hause gives great views of the north west corrie. But, once again, the views from the top were spectacular. Eating lunch on the summit of Robinson I started to think of extending my day by tackling Grasmoor and her neighbours. This thought only lasted a few minutes after I started descending into Newlands Hause across Buttermere Moss and realised how low I would have to go to get onto the ridge up to Whiteless Pike and Wandope. They will still be there on another day! So I carried on with Plan A, which was to drop down to the car park at the bottom of Moss Force Waterfall and then traverse the ridge over Knott Rigg and Ard Crags back towards Little Town. The pull up from the car park is more than I expected and the tiredness in my legs as I made the ascent made me smile at my own thoughts of just a few minutes earlier of taking on a whole new range of mountains at that point in the day. What was I thinking!

The walk over these last two fells was very enjoyable and I got some great views of the higher mountains to the left and right of the ridge. Once I had descended Ard Crags over Aikin Knott I followed the obvious path towards a gate only to find a sign saying "PRIVATE". As the field on the other side was full of new-born lambs I decided not to risk ignoring it and dropped down to my left onto the path that runs along the valley below Scar Crags and Causey Pike which leads down onto the road at the small car park at Rigg Beck. It was then just a short walk down the raod past the new Visitors Centre (not yet open) back to the car.

This was a fantastic day because of the weather and the views. The ascent of Hidscarth was a real highlight but the remainder of the walk was fairly straightforward and I'm not sure it would have been much fun in poor weather.

Here are some more pics and my route... Was over there last summer and it was dry as a bone on the path I walked. It might get a bit spongy after rain but I never noticed any wet areas.

Wow...what a walk and again some great weather. I think I'll need to have a look at this as it looks like an interesting alternative to the usual peaks in that area - totally stunning!

You picked a great day for your trip south Derrick, a great round Thanks for posting