Easter weekend was always going to be busy in the Cairngorms so I needed to find a 'less popular' hill to go at. WH to the rescue again with 'An Socach'. I reasoned that anyone making the drive to Braemar area for bagging purposes would be looking at multiple's i.e. the cairnwell munros to make the journey worthwhile and your average 'day tripper' wouldn't even be aware of An Socach.

So I approached the parking spot beside the A93 with a healthy mix of excitement and anticipation, there was only one car parked there and I knew the guess was a good one. The sky was still a whiteout but MWIS tell me that will be gone by 12 noon, so 11am was an excellent arrival time.

So, kitted up in new lightweight 'summer boots' carrying the usual snacks, an orange and more drinks than a man could possibly need I headed off through the gate and down the ATV track.

As the track turns around the cottage it's clear that it is well maintained but currently 'closed up' - a summer let perhaps?

Behind the cottage is a style, make sure you stick with the ATV track and don't get tempted by the small bridge crossing Baddock Burn 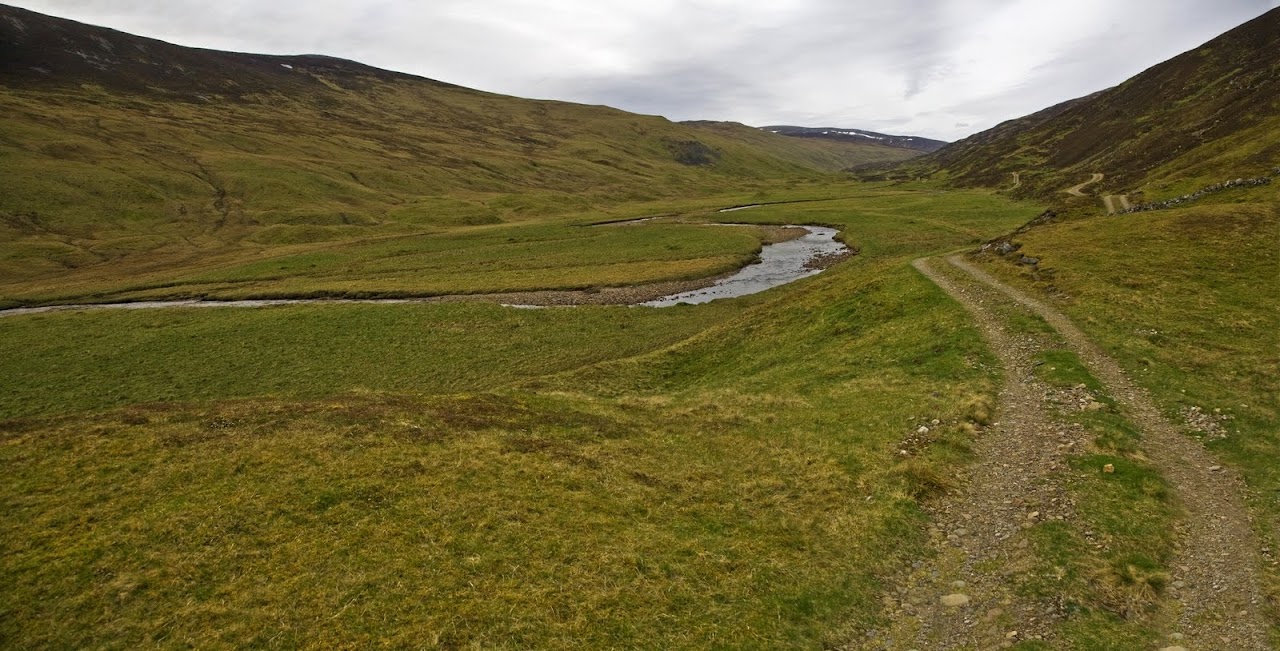 About 3.5k into the glen you cross the first real ford of the day, an easy task today after such a long dry spell 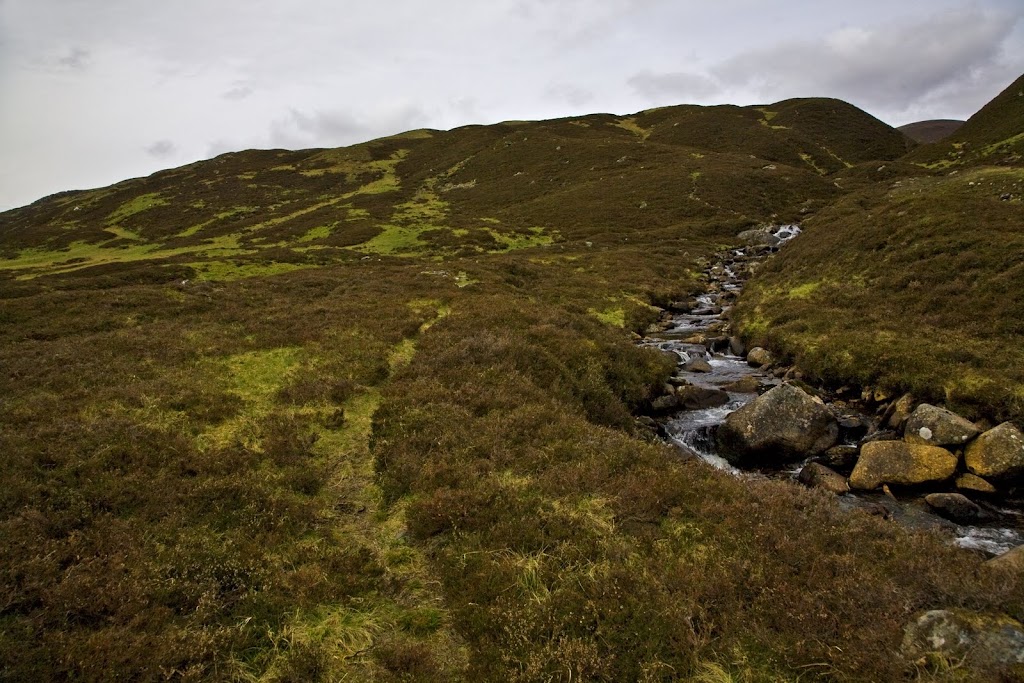 looking back shows it is a rapid ascent through the heather but good going all the way, perhaps it would be more difficult in wetter times

Eventually I reach the cairn that is much larger than first expected and so appeared much closer from lower down the slope, its one of those "how much bloody further is that cairn" cairns, Socach Mor is behind the cairn still wearing a small belt of snow on its northen slope

As someone had taken the time to build a cairn I thought it only proper to sit down and have a cuppa and take in the views across the glen....not just resting 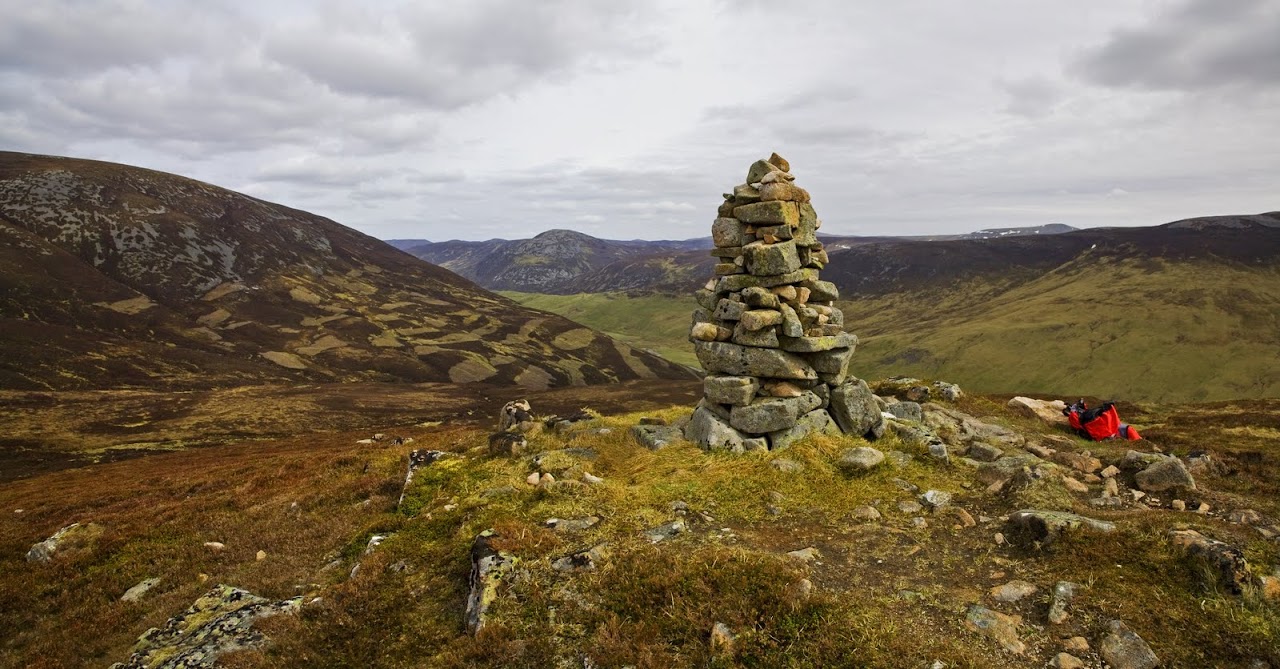 zooming into the hill I see a lonely figure wandering down with a small white blob jumping around beside him. It turned out to be the owner of the other car at the layby and his 'westie' , we shared a 10 minute chat about the usual before he went on his way - so now I have the place to myself. 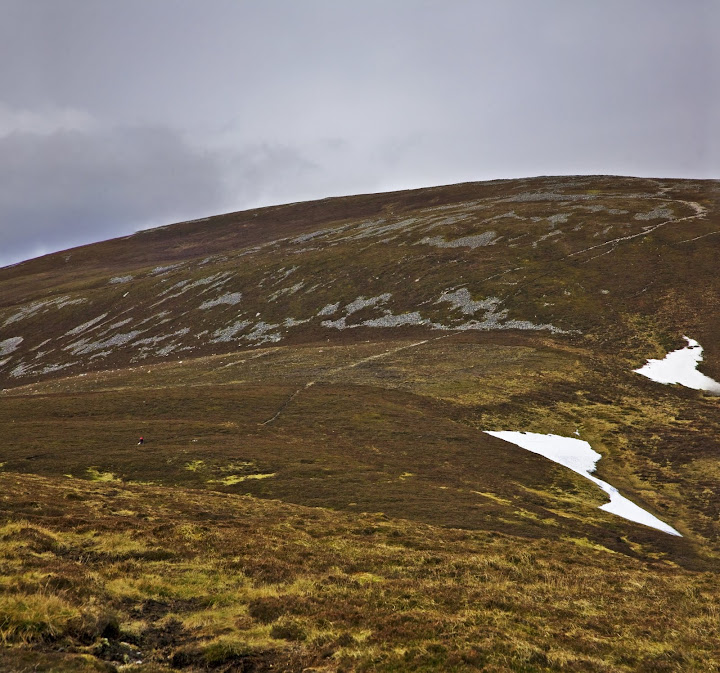 I set off up the side of the hill with a new kind of excitement that comes from knowing the sky is clearing and you have a 2k flat top to wander about on all by yourself.....the steep side of the hill soon focussed my attention on just getting up it!

Even at the first false summit the views are fantastic

and at the next one the same again

MWIS got it bang right again delivering beautiful clear skies at exactly the right time - it's difficult not to say 'wow' out loud when faced with such views across to the Grampians..... and so I do...several times

looking along the top to An Socach at the end of the snow line, just a nice 2k wander in sunshine with blue skies on a warm and beautiful day...all alone....fantastic

Best have a cup of tea in the shelter first though and grab a pic for the records... 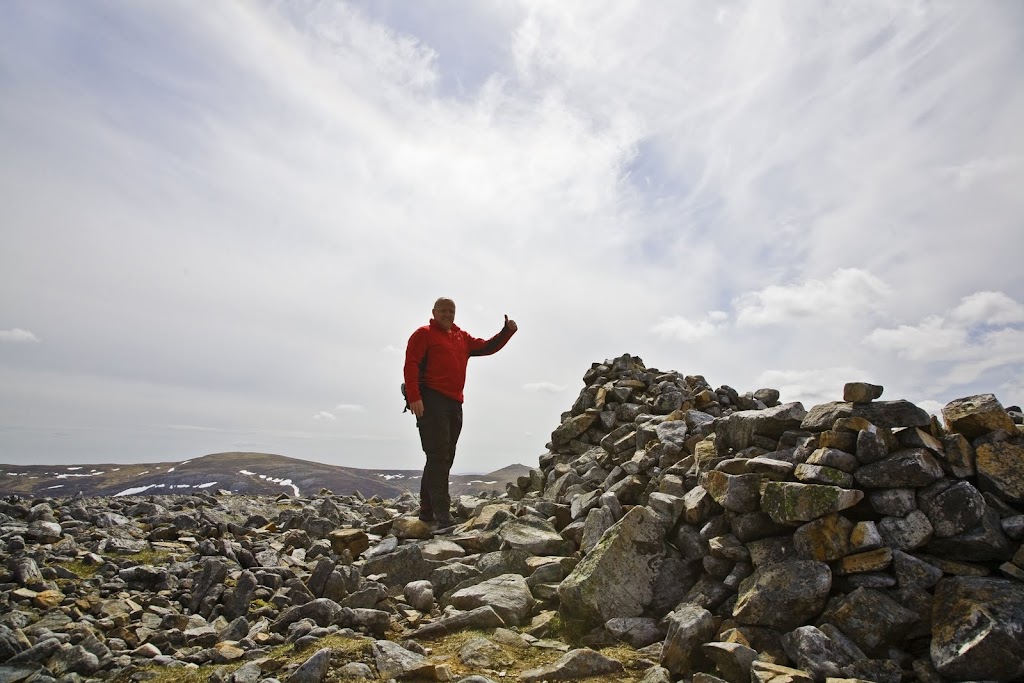 then its time to get going to the summit and I'm a little surprised to see a 'well trodden path' in the rocky ground, perhaps this hill is more popular than I thought

another look over to the Grampians as I cross the saddle

looking south-west as I wander I am surrounded by stunning views, there is virtually no noticeable ascent as I cross so I can just wander along enjoying the views

soon the summit cairn is in sight and its a slight increase in ascent to finally make the top, though the views around mean you still don't notice any effort to make it

turns out that is the summit shelter, the cairn is a little further west so off with the bag and a summit wander is in order 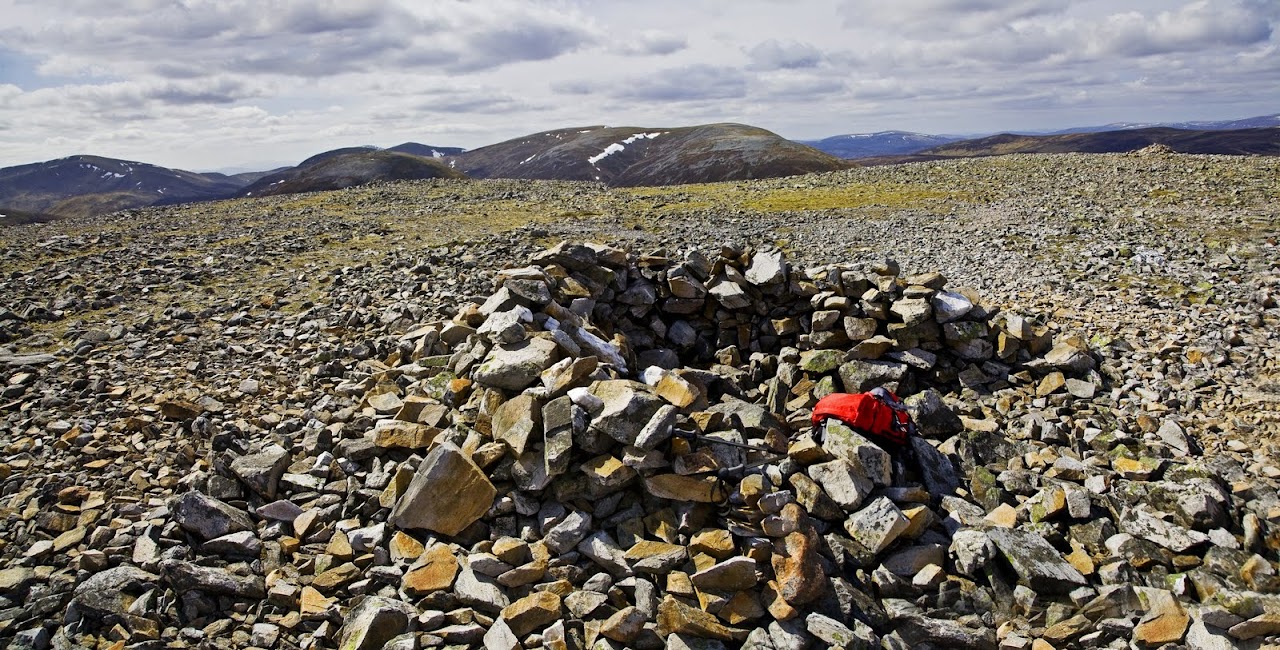 best get one of these for the records, I'm not being artistic, there's no trig point up here to set the camera on 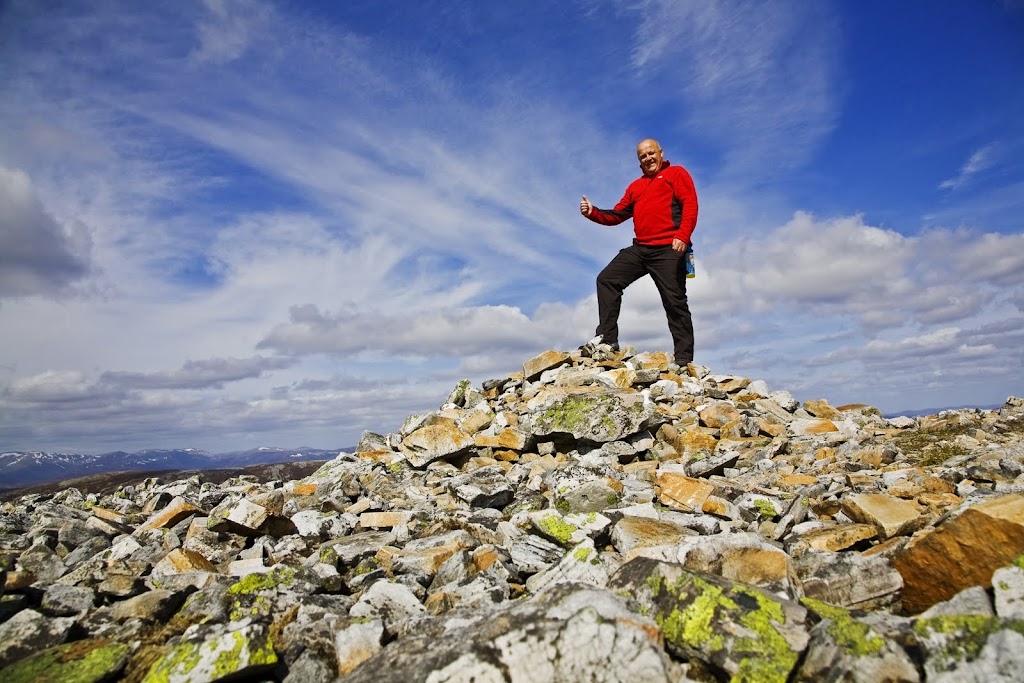 after a good 30 mins up top really enjoying the scenery, the weather, the beauty and the solitude of the place its time to decide on the descent - back the way I came or the drop off half way across the top and down to the track below

it's a good descent, steep in places but I can't help but think it would be bloody awful when wet, looking down at my new 'lightweight summer boots' I'm glad this is not the bog it could be

There are a number of fords along here but they present no issues today, when its good and wet they might

when the small cottage comes into view it is almost a shame that I am coming to the end of the walk, it seemed very short even though it comes out at 10 miles 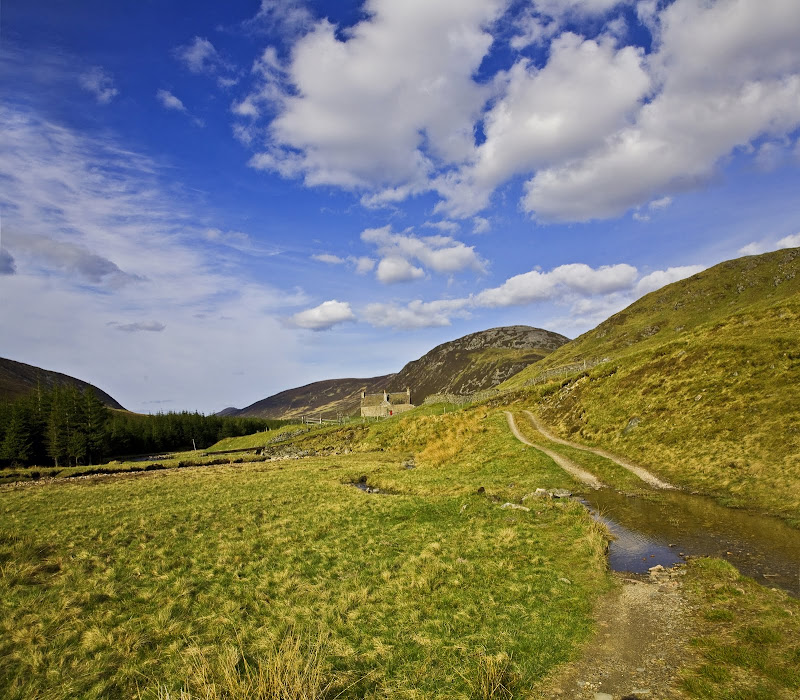 When I set out this was a bit of a 'make do' hill to avoid the easter crowds, at the end of the walk it was a little cracker that I really enjoyed and seemed pretty easy too....maybe it was those new 'lightweight' boots

Didn't see a thing when I was up there Chris, nice set of pics! I doubt I forget doing this hill for a while, experienced some of the strongest winds I've faced up on that broad summit ridge - and I dragged a fellow American up there for her 1st Scottish hillwalking experience

Stretch wrote:Didn't see a thing when I was up there Chris, nice set of pics! I doubt I forget doing this hill for a while, experienced some of the strongest winds I've faced up on that broad summit ridge - and I dragged a fellow American up there for her 1st Scottish hillwalking experience

Thanks stretch, a broad summit has its own value in strong winds

I suspect your fellow American was less than impressed, I can imagine it to be rather dull in the clag.....to say the least

Glad to see you did the "proper" top! A lot of guide books and maps don't actually say that the western summit is the highest.
Super photos again too!

trailer wrote:Glad to see you did the "proper" top! A lot of guide books and maps don't actually say that the western summit is the highest.
Super photos again too!

Thanks trailer - I never use guide books, just rely on good old 1:25000 OS maps where each summit has its height detailed....no mistakes then

Another great report Chris. And excellent pictures too

I don't think it will be too long before I am back in this area for some more walking. This looks like a great walk - so long as you get the rightr weather of course, which you certainly did

rockhopper wrote:Great report and photos as usual chris - very timely as well as I'm hoping to get up this way soon

Thanks rockhopper - come on up, the weather's fine

Some cracking pics there Chris,only 10 mls the leg must be feeling much better

gammy leg walker wrote:Some cracking pics there Chris,only 10 mls the leg must be feeling much better

Thanks Gammy, I reckon its as good as its going to get now...but the fitness still has a way to go

rockhopper wrote:Great report and photos as usual chris - very timely as well as I'm hoping to get up this way soon

Thanks rockhopper - come on up, the weather's fine

Another great report and another fine set of pics

Glad your leg is holding up

morag1 wrote:Another great report and another fine set of pics

Glad your leg is holding up

Thanks Morag, gonna give it a rest tomorrow and have a nice coastal wander I think

What a fantabulous report and gorgeous pictures Chris. Can't wait to go back over to Braemar (did I mention I love it there

looks like you had a grand day away from the hoards