On a beautiful Easter Monday, an alternative approach to these pleasant grassy hills from the one using the afforested southern paths, making for some interesting climbs and ridge-walking, and a beautiful initial descent, but then a very long walk-out and a quite horrible finish...

our_route.gpx Open full screen  NB: Walkhighlands is not responsible for the accuracy of gpx files in users posts
From the carpark at the summit of the A470, the short climb up the well-trodden grassy path to the summit ridge of Cribin Fawr is an easy one. Once on top it's tempting to follow that path on over the little rocky bumps to the west rather than hugging the fence, and this seems to be the more interesting route. That is, until you want to cut back to the (very flat) 'summit' and find the way barred by a wide and treacherous bog - treading confidently on what looked a nice grassy patch, I plunged thigh deep into the viscous gloop beneath... From there, the few yards back to the fence were taken very gingerly indeed... 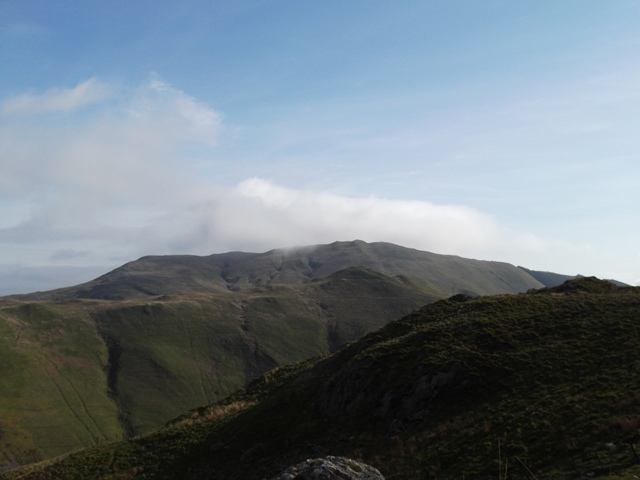 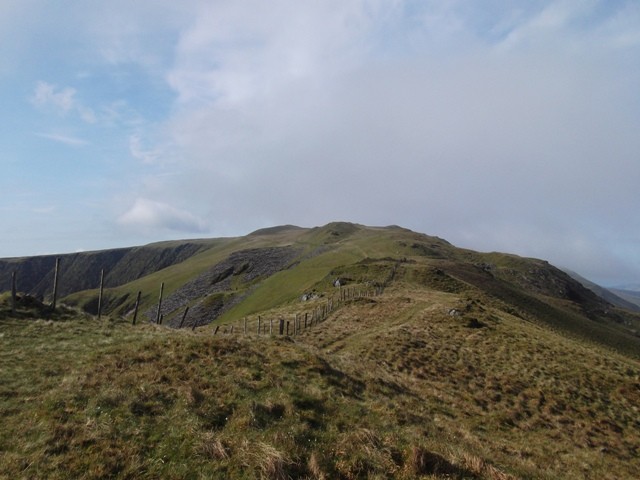 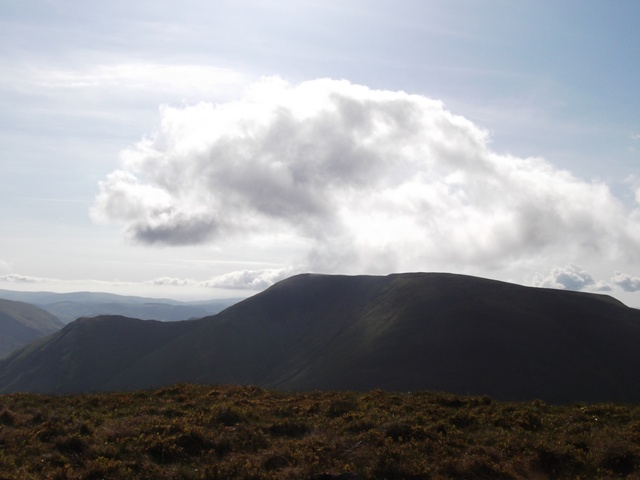 The route from here to Waun-oer, much the most handsome peak in this area, is a there-and-back, but a very good one - steeply down and up from the bwlch on a well-made path, skirting the edge of the forest, to the pleasant grassy summit area. Even after dwelling there for some time, the clouds never quite left the top of Cadair Idris across the valley to open up what might have been a beautiful view (much as they never had during hours up and down that mountain last summer!). 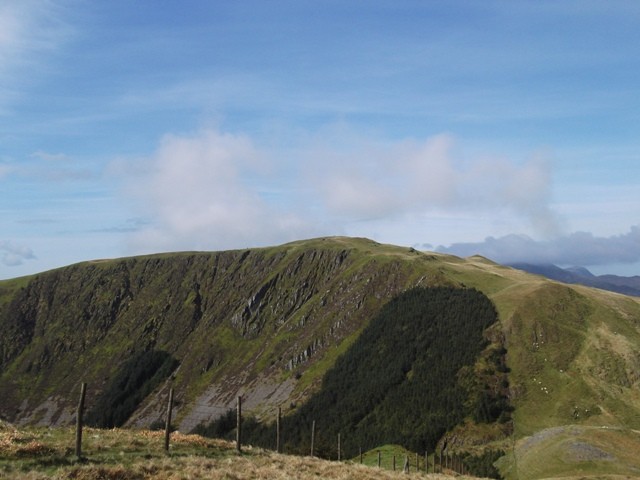 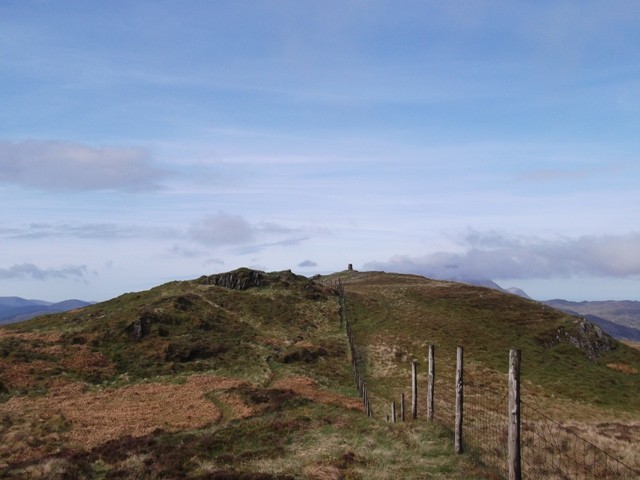 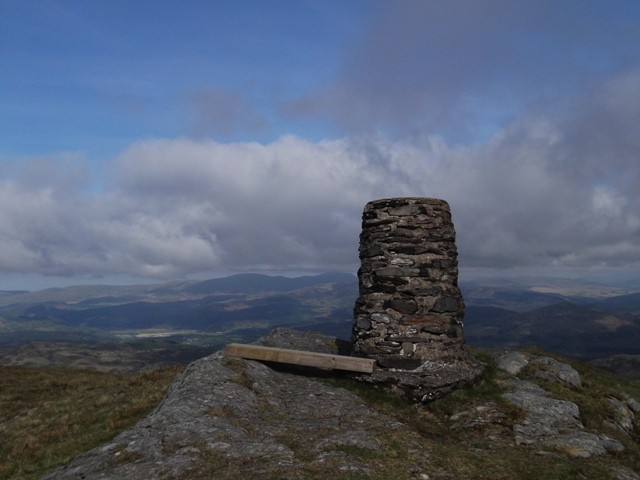 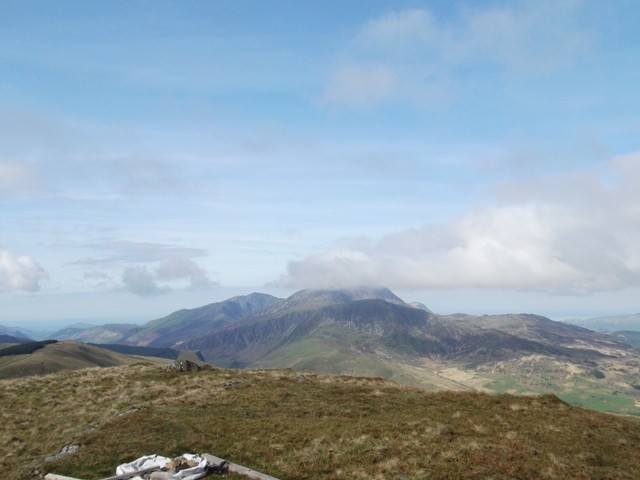 After almost reascending Cribin Fawr, there's a very good couple of miles along the winding and - in places - quite narrow ridge over Craig Portas and up to Maesglase. Broad views of the surrounding hills and valleys abound, and the going - until the spongy (this day, probably very marshy on others) areas just short of the summit - is generally firm and comfortable. Maesglase itself, belying its quite impressive facade from the road below, is a bit of a flat heathery lump on top - having two peaks doesn't make either of them too impressive... - but with the skies now clear all round, the view finally opened up to Cadair, now far away in the distance. 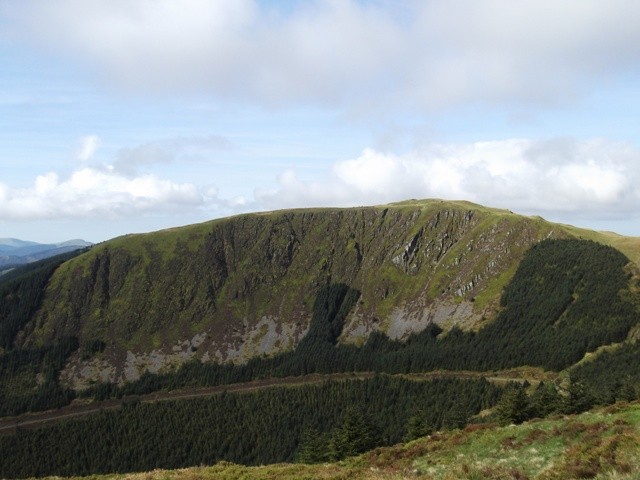 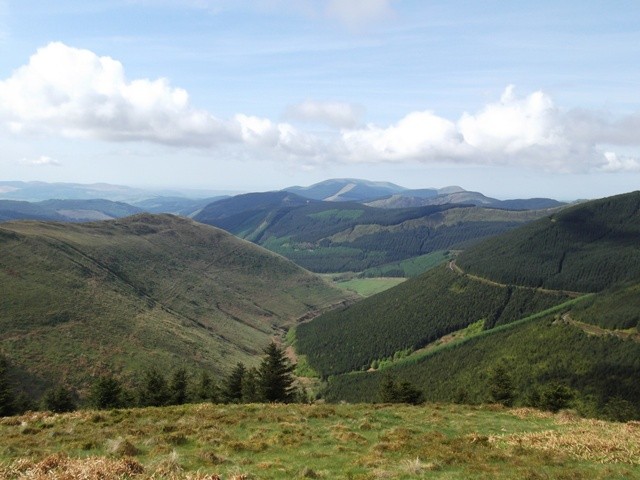 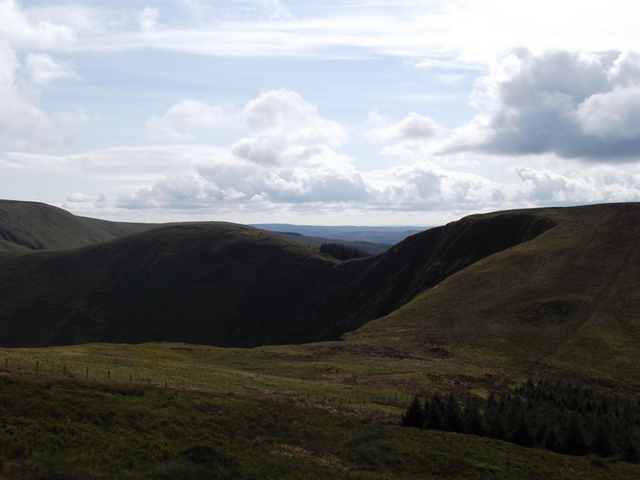 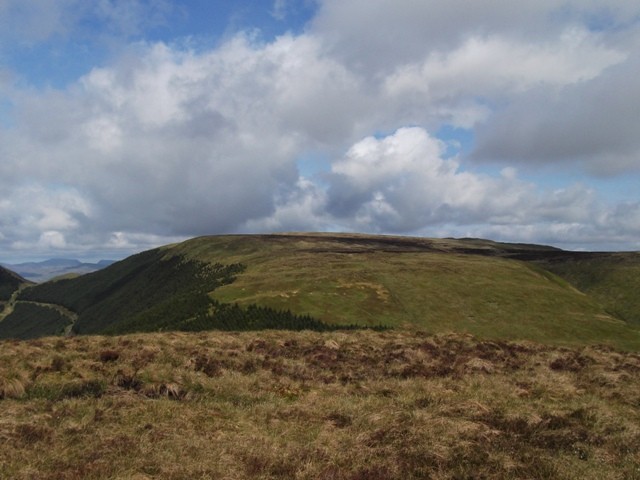 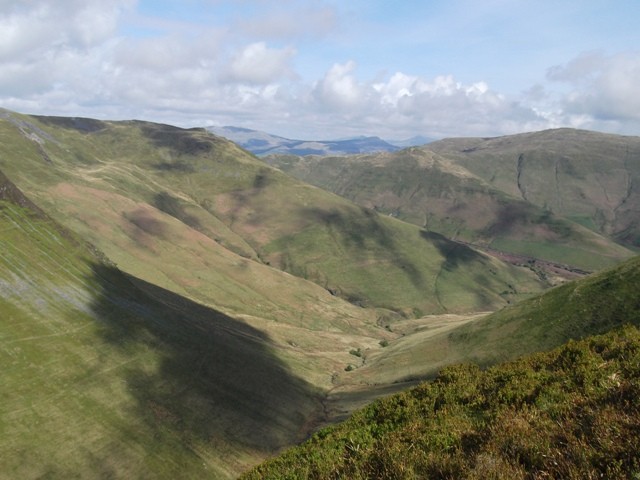 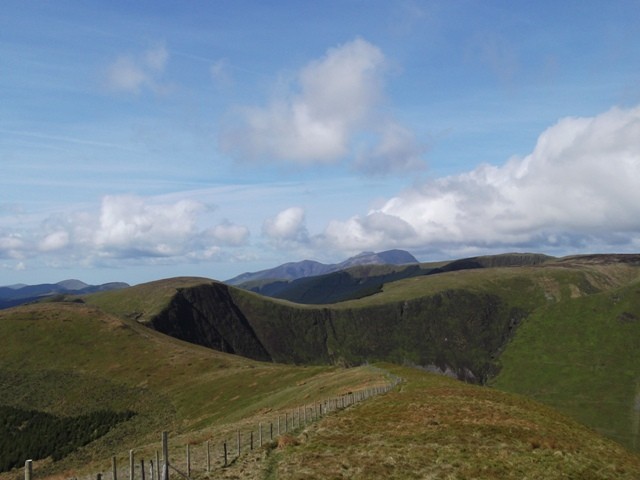 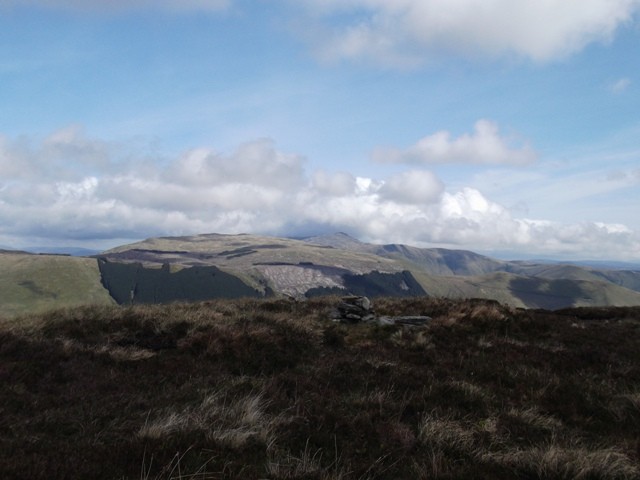 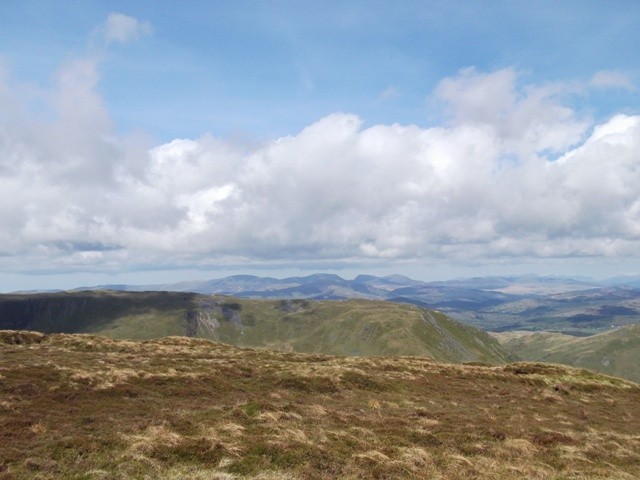 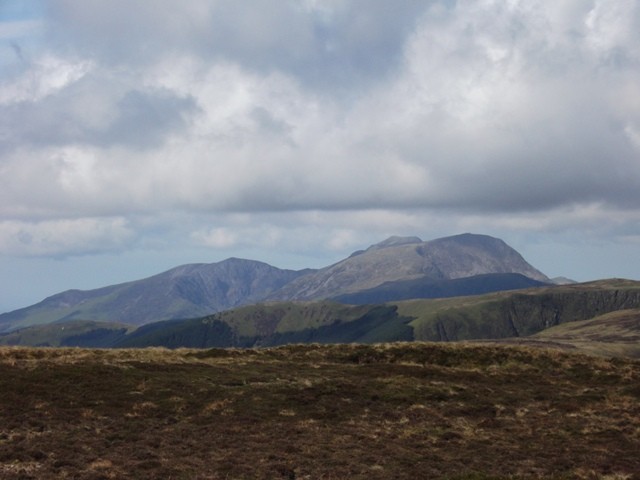 Cadair Idris in close-up from Maesglase

From the eastern peak, there is a lovely (and very clear) path bordering - sometimes very closely... - the full eastern edge of Maesglase, running across the top of the spectacular vegetated cliffs of Craig Maesglase and then steeply east down a pretty ridge into the lush green valley of the Nant Maesglase. This is a beautiful stretch of walking, as is the quiet track north towards the road, looking back over this best side of the mountain. 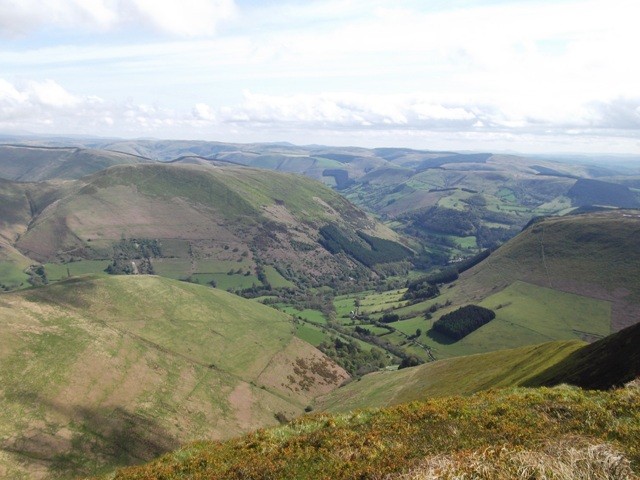 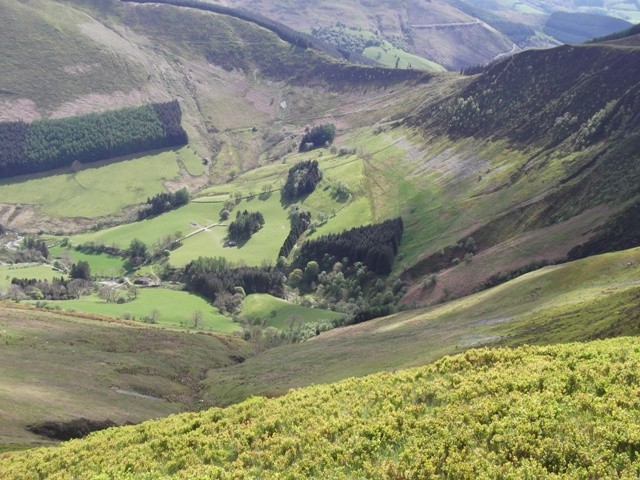 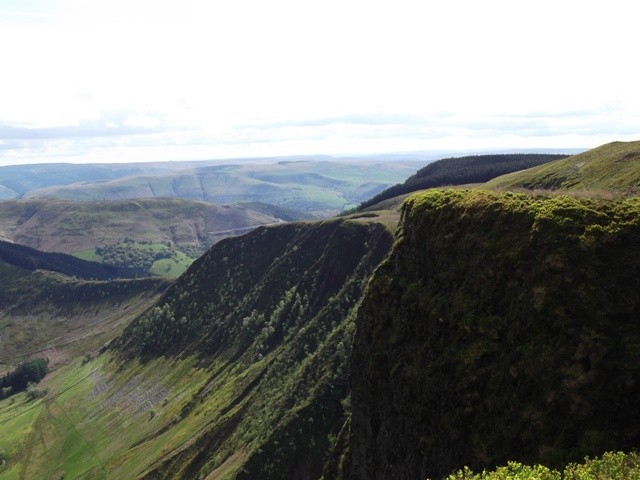 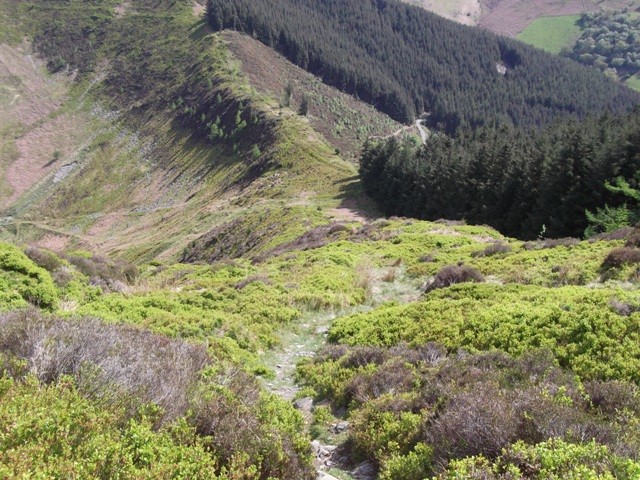 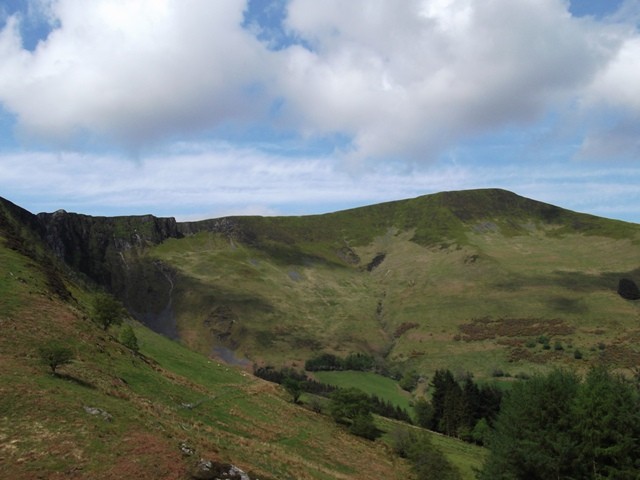 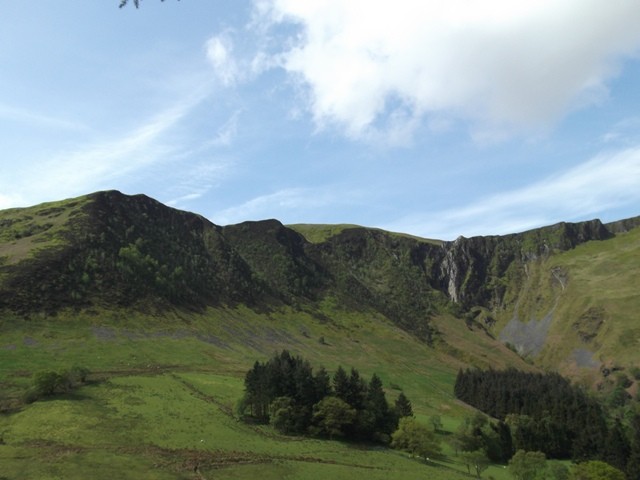 The downside is that you still have the best part of four miles to go from here back west and uphill to the carpark. You can find quiet flat routes through the farmland for over half of this, 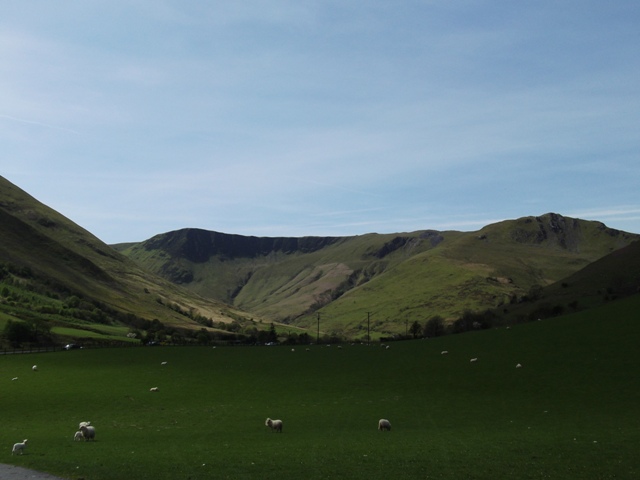 but eventually there isn't much choice but to hit the A470 just before it starts to climb steeply up. There's a wide verge for some of the way, which is easy enough - even if hardly the sights, sounds, or even smells of the mountains - but the last half-mile or more after the road narrows is just awful. You can choose between tramping easily up the road itself, but diving to pin yourself against the crash barriers every time a car whizzes past inches from your nose, or clambering over the fence and clinging onto it as you inch warily along a horribly eroded half-path that just about exists on the south side of the road. Neither is exactly fun. (With hindsight, climbing the hillside north and tramping pathlessly along well above might have been better).

If purely out to 'bag' the summits, then going back along the ridge from Maesglase to Cribin Fawr and down the ascent path would have shortened this route considerably and cut out the road pain; pleasant enough too, even if you'd be rather over-dignifying Cribin Fawr by climbing it two (and nearly three) times in a day! But this descent path was well worth the effort, and there must be a good way to finish it off...

An excellent report there P, Some outstanding photos

Im looking at doing these in the summer "touch wood"..So its always good to have a photo recce

fantastic P, and some of the best pics I've seen on here - what a cracking walk

Great report and pics. Bit of a bummer sinking into the bog at the start of the walk, but at least you had time to dry off.

At the risk of sounding like a broken record, your reports and photos are really providing an excellent insight into the Welsh Hewitts that I've yet to do. These three look like a really good walk, apart from the boggy bits, and hopefully I'll get around to doing them sometime later this year.

I know the road section at the end of some walks is hardly the best way to round-off the day, but I tend not to mind them too much - each to their own, I guess ...

They're never the preferred way to round-off a walk, but occasionally they're the only option - as in today, when, after a totally enjoyable walk over Moel Hebog, Moel yr Ogof and Moel Lefn, the path back to Beddgelert suddenly infringed on 'private land' and I was forced to do the last section on the main road. Still, it serves me right for using an OS map that's about 19 years out-of-date!

Thanks, everyone - extremely kind. The scenery and the right weather make for good photos, of course, I can't take credit for them (as I've proved in this weekend's report...!).

Red Peak - I rather like a nice tarmac lane too, but this was a bit too close to walking between lanes on the M1 for my liking... And you didn't miss too much on the Moel Hebog walk-out, by the way; I think I may well even have met the same farmer, but was (politely) clutching a current OS and was grudgingly allowed through since I'm 'not one of those ******s from the campsite'... But - after clambering awkwardly over a rusty barrier - his treasured field was a foul-smelling morass, the path through the trees beyond (perhaps unsurprisingly) hardly-used and difficult, and the road would probably have been rather better!

poppiesrara wrote:But - after clambering awkwardly over a rusty barrier - his treasured field was a foul-smelling morass, the path through the trees beyond (perhaps unsurprisingly) hardly-used and difficult, and the road would probably have been rather better!

I think I know the field you mean. Looking across it from the farm house, it didn't look particularly inviting. And as I couldn't see an obvious route through the trees beyond it, you're probably right about the road being a better option.