after last weeks walk on Criegiau Gleision I got a god look at Pen Llithrig Y Wrach and I knew I was heading there next
The plan: leave Llanrwst 11:00 arrive Capel Curig 11:30 head out of town on foot to find the Cowly reservoir path once at the reservoir make my way up Pen Llithrig Y Wrachs SE Ridge, follow W to Bwlch Y Tri Marchog's top, along to Pen yr Helgi Du, Down climb onto the Bwlch Eryl Farchog then Scramble up to the main path up to Carnedau Llewllyn, leave pack on Llewlyn and nip over to Tick Yr Elen, Double back to Llewllyn pick up pack and then head SW to Carneddau Dafydd then along to Pen Yr Ole Wen and wild camp.

New_Route.gpx Open full screen  NB: Walkhighlands is not responsible for the accuracy of gpx files in users posts
Finding the path up to Cowlyd was very easy and the Views over the Owgen valley were amazing.
once I gained the Plateau I was amazed at it's size and it' stretched all the way to the Saddle between Greigiau Gleision and Pen Llithrig y Wrach. didn't find a path immediatly up this ridge but it was heather and boulder fields which made for good walking.
soon found a path, then the Sun went behind the Clouds while I did the rest of the hard work after maybe and hour I reached Summit and got to get a look at the Carneddau. 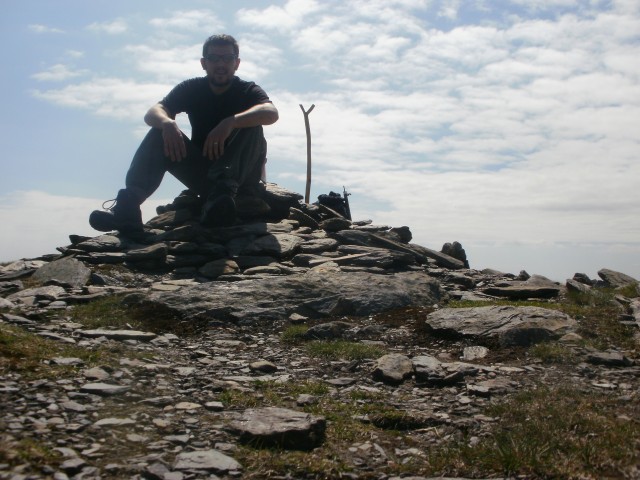 Pen Yr Helgi Du Cairn with Llewllyn in the Back

now Pen Yr Helgi Du was a pretty featureless hill but the other side of it was very exciting a steep down climb onto the Knife edge ridge of Bwlch Eryl Farchog which quickly changed my opinion of this hill. Last bit of scrambling before the main ridge now on the Main ridge I was getting tired and knew that Lunch was about half a mile away
passing lots of people now and many in trainers and trackie bottoms!!!!!!
Summit was really nice and very large with more amazing views of the Carneddau I stopped for Lunch. Me on Carneddau Llewllyn after Lunch I Left the Rucksack on Llewellyn and nipped over to Tick Yr Elen, my camera had packed it in and the rest of the pics had to be taken with my mobile and the haze finally caught up with me in the evening so the pics aren't the best as i started to walk over to Yr Elen RAF choppers started flying over the Carneddau one would head over Llewellyn and then over to Yr Elen, hover over the summit for 2-3 minutes then take off over to Bethesda turn around and do it again ob their third pass I was on the Summit of Yr Elen ad had a chopper above me and a RAF dude looking down at me as I headed back over to Llewllyn another chopper started doing the same over the Bwlch Eryl Farchog and it looked like he was trying to land on the ridge this second one was olive or camouflage painted as the first one was navy with a yellow roof. was really annoying having these things buzzing around made a lot of noise in these quiet hills. 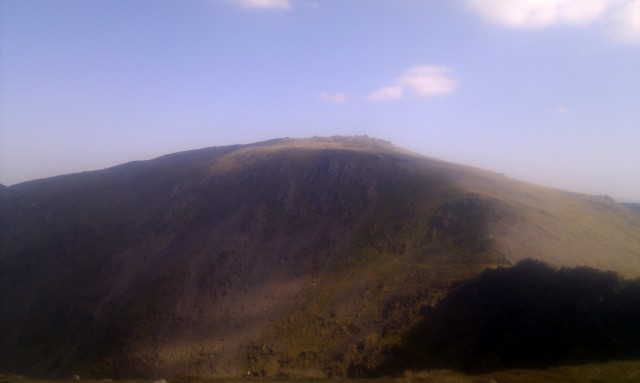 making a quick re-ascent of Llewllyn to collect my bag I then said hello to the new people who had reachedthe summit and I was then off to Carneddau Dafydd I think it was around 16:30 now so I was wondering why there was so many people about, I was intending on staying the night here but everyone else?
After climbing then niping over the re-climbing Llewllyn I really noticed the Pack on my back now and I was quite tired at this point luckily there wasn't much up and down the rest of the walk to Pen Yr Ole wen, but before that I had to climb Dafydd. half way along ridge to Dafydd Looking back along ridge to Llewllyn as i said it wasn't very up and down almost the same height of the saddle.

now because of the mental sun and lack of rain for the last 2 weeks I drank all of my water I had a flask in my rucksack full but I wanted to use that for cooking so I was stuck. I knew there was a lake below Pen Yr ole wen but didn't know where I was going to sleep, I was toying with setting up camp on the summit and nipping down for water but I was pretty knackered, but setting up camp at the lake meant missing the cracking sunset. so with my options limited it wasnt looking good. I needed water I so decided I would drink the flask once i reached Dafydd and once I saw some people already pitching down at the lake I decided I'd join them tonight a bit gutted but oh well I now proceed to finish the rest of my tracker bars and down a litre of water
now there was a small matter of Pen yr ole wen then down and dinner!!! It's all downhill from here!! and the views were cracking. Looking back to Dafydd from Pen Yr Ole Wen Summit so. Everything went according to plan al accept the Summit Bivvi but the water was more important I wouldn't want to be tired and dehydrated that high up.
the walk down was tiring and just when you thought it was over the path heads to some down climbing into a Gully offt!! all in all I was Lucky with the views it was a long day and I was glad to have set myself and goal and reached it.

Re: The Southern Carneddau.

Great report Mac, cheers for this!

I did this route a while back, except for going straight up to Pen yr Helgi Du at the start. Great to see your photos, I had a day of high clag. Like you I found the narrowish bit of ridge and the scrambles great fun, and a bit of a surprise. A great round!

Hope you had a decent overnight, looks like a great site.