For the last 18 months or so every time I went on a long walk I have said “This is good training for the Fisherfield Six!” I was going to do them last year but I never got around to it. And then I remembered that somewhere at the back of a cupboard I did actually have one! And so it was that after a few days in the Fannichs we parked at Corrie Hallie and started the walk in through the woods, past An Teallach and down to an easy crossing of the Abhainn Loch an Nid. Then the hard work started as we ascended above Creag Ghlas. 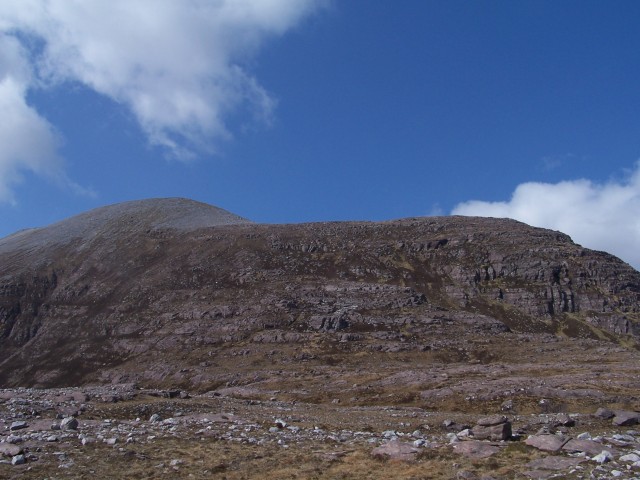 A short rest was in order before we followed a very steep, narrow path up on to the rocky ridge of Beinn a’Chlaidhaim. Ridge and An Teallach Four hours after starting out we reached the summit. Looking northwest I asked Katie “What’s that hill over there?” “I think it’s Ruadh Stac Mor “she said without looking at the map. This was rapidly becoming the Fisherfield Five! I was never going to make it up there after carrying camping gear for two days over 5 other Munros. How was I going to break the news to Katie? Fortunately the same thought was going through her mind and she checked the map. “No, you’re OK, that’s Beinn Dearg Mor – it’s a Corbett”. What a relief!!! Spurred on by a description of the ascent of Sgurr Ban (“ascend easily up grassy slopes”) we soon realised that the writer of this advice must have only been carrying a day sack! That training was certainly coming in handy. Then steeply down to the next bealach to encounter the daunting sight of the scree slope leading to Mullach Coire Mhic Fhearchair. This was most unpleasant but fortunately only about 200m of ascent. The views of Lochan Fada, Slioch and our next target, Beinn Tarsuinn were magnificent as we made another steep descent Doing it with style?

before following a narrow path beneath the crags of Meall Garbh to Bealach Odhar. Then we tackled the last up of the day to the summit of Beinn Tarsuinn. The rocky, pinnacled ridge leading northwest looked interesting but, being very tired we opted for the easier path below, dropping down to a boggy bealach where we found a reasonable spot to pitch the tent beside a small burn. This was full of small fish and it was difficult to obtain water without adding to the protein content of our meal but after a splendid 3 course dinner followed by hot chocolate we collapsed into our sleeping bags.

It was another beautiful sunny day when we set off up A’Mhaighdean at about 8am. This was a very pleasant climb with spectacular views all round, especially across to Torridon. But looking across to Ruadh Stac Mor we could not imagine how we were going to get up there. The crags looked impenetrable. The path however led to the bottom of a slanting rocky path (rather loose!) up which we scrambled and then made our way over boulders to the trig point. Two Munros done before 10.30am! All downhill from here! But with creaking knees there was a huge boulder field to cross to reach the twin lochans below. We made our way across to the path at Clach na Fritheallaidh and then on down to Loch Beinn Dearg. The going was then much easier in the hot sun and we crossed the burn at Larechantivore, made our way across the strath and crossed the Abhainn Srath na Sealga to reach Shenavall. The river crossings were all very easy due to lack of rain. In my celebrations on Ruadh Stac Mor I had forgotten the uphill slog from Shenavall, past An Teallach (the only An Teallach I wanted at this stage came in a pint glass!) again and finally downhill to Corrie Hallie.

I found this a very tough and challenging expedition but worth every minute of the effort involved. I never would have managed it without all that training though.

Fantastic! I really wanted to do this last week but decided against it, best to save it for the conditions like you two had. Looks like a great round that you both will remember for a long time.

Fab report, looks like you got ideal conditions as well. The weather makes a massive difference on longer exped's like the Fisherfield 6, i only hope when our time comes we are as fortunate as you guy's.

Great report and top effort. The best walk in Scotland.

Agreed, a super report. The shape of the mountains that side are so different to the east. Inspiring!

due to hit this later this month, better get training!!!!

Well done! I take my hat off to anyone completing this. Great report.

Brilliant effort bp,cant imagine how I will get round this 6

Excellent report, looks like you camped in almost the same spot as me on my trip a couple of years ago, although I returned to the bealach from Ruadh Stac Mor and headed down the stalkers path on the way back. The walk in is a killer, I think we reached our last summit at lunchtime and didnt get back to the car til after 7pm...and how right about the ascent after reaching Shenavell, you think its not far back now but forget the backbreaking 300m climb back up to the path! Soul destroying

As concise an argument for splitting the six as I've ever seen written.

Climb from Carmore and this view evolves.