This has been my favourite munro to date. Loved the walk up through the gorge, despite almost losing ruby over the edge of a 50ft drop!! followed by the short trek across open ground near Meall an Daimh before the steep climb up the gully to the summit ridge - absolutely magic!!

Started from the car park near the Brewery at 1130 with Ruby as usual. Decided to take my bike based on the other reports - best decision of the day as can't imagine how depressing the 5mile trek back would be. The bonus apart from having the bike was (a) it was downhill all the way (b) I managed to get a ahead of Ruby for once - see pic below!!

Didn't really get the feeling of isolation described in some of the other walk reports despite not seeing a soul for about 2 hours (lots of cars suggested some encounters would follow at some point), however I can imagine in snow or wet/windy weather I may have felt differently. Meall Beag looking very impressive on the cycle out Reached the "bike park" after about 40 minutes Got a first look at the eerie cottage about 10 minutes later -woooooooo!!!! The climb up following the stream/gorge all the way. Really enjoyed this part except the bit where Ruby almost plunged down into the riverbed below. A very scary moment! On the way back Ruby had a look at her nemisis!!!

After about 90 minutes we got our first good look at the hill. Very impressive. 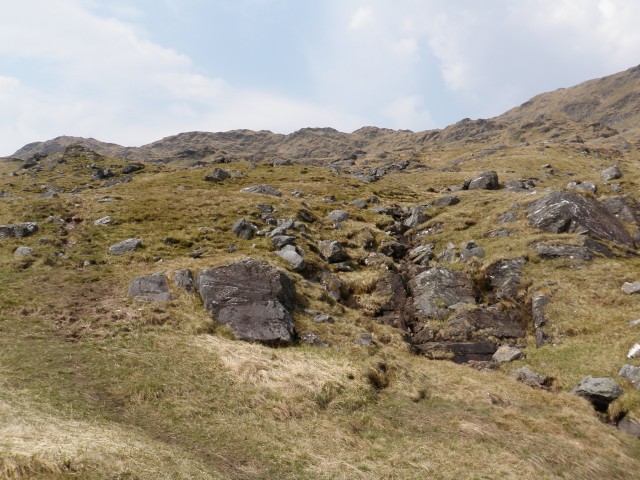 We headed across a relatively flat area and on to tackle the last steep climb before reaching the summit ridge walk. The path was badly eroded but nothing too technical to deal with. Once at the top of this climb it was easy going all the way to the summit... and the views were simply breathtaking. made it after about 2hrs 50mins The next 6 pics are a 360 panorama form the summit. Shame about the haze 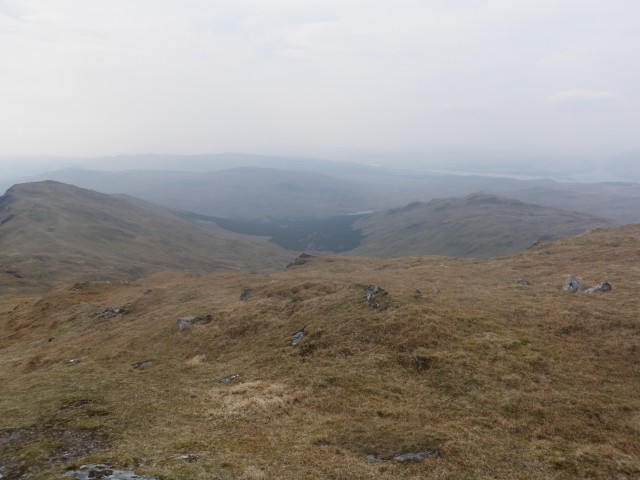 We met this guy on the last climb section. He took the summit picture for Ruby and me. Was on his first wildcamp. A great day for it

We didnt hang about at the top for long as the wind was up but we did stop for a bite to eat and some time to enjoy the majestic Scottish scenery on the way back down.

And then finally we made it back to the bike for the very easy ride home...

Couldnt upload these two pics on the report. Lunch + me ahead of Ruby (for once!!!) nice report, i loved this one too, one of my favourites so far. i saw those keys when i was there, maybe they`re for the cottage

Good stuff. It's been a while since I was up that hill, but I vividly remember a bit on the path that was unpleasantly - and unexpectedly - very close to a nasty drop. Sounds as if it might be where Ruby gave you a scare.

That hill looks a bit hairy

Great report. Loved the pic of Ruby running to keep up

Nice report, brings back memories. Good decision to take the bike, the 5 mile walk out is/was not fun. Most painful my feet have been in ages.

MW - I was a little apprehensive at the start of the walk because of some of the other report comments and pictures, but it turned out to be a really good climb, lots of interesting twists and turns but nothing dangerous - apart from the one bit which you can avoid by climbing around the path - 10 minute detour

The guy you met at the top was me! I was camping a bit further along the glen so climbed up (and down) the grassy slopes on the north side of the gorge. I found it very tiring on the tussocky grass and no path. The wildcamp went well apart from not being able to phone home (no reception) and having to walk back to the cottages at Glenfyne Lodge to use the phone. The lady in the cottage says this happens a lot, especially when there is an accident (the gorge path?) Note to self; it's not always feasible to phone home from a wildcamp so make sure the alarm isn't raised if I don't phone.
I wanted to add a photo but when I click Img nothing happens. What am I doing wrong?

Not sure if i could have coped without the mobi!! We saw you veering off to the left of the path after the steep descent and guessed you were over there somewhere. Re the pic issue - not sure what the problem is. Are you clicking add file and then place in line once it uploads?