I had recently seen this route described, taking on all four of the Grey Corries Munros in a single trip and it instantly appealed to me, particulalry as I love the short walk to An Steall through the Glen Nevis gorge

It was also an alternative to the standard route from Coirechoille, so I expected a real sense of widerness on the approach.

Another extended weekend presented a good opportunity to tackle this route too, as I knew this would probably be a long, hard day and I'd no doubt need a day or two to recover

Wasn't wrong there then

The walk through to An Steall was as enjoyable as I expected and I was soon enough enjoying the sounds and sights of An Steall. Early on, as I walked through the Glen there were also good views of Ben Nevis as well as the Mamores. 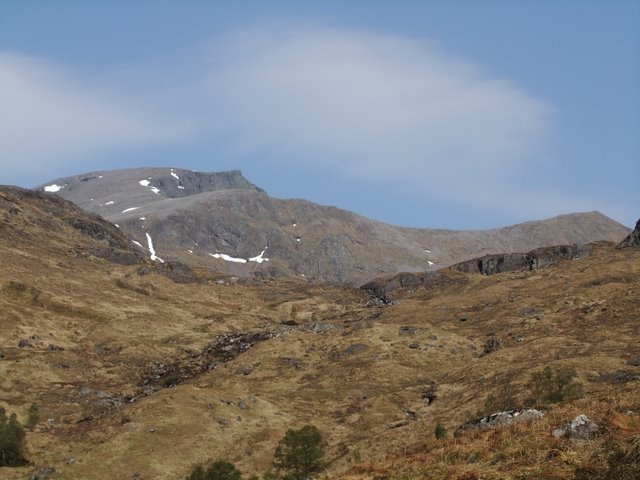 This was going to be a long day, so I thought it best to get my head down and push on toward Coire Rath and the first hill of the day - Stob Ban. By now, any path I should have been following.....I wasn't

and it was a case of making my own way. Soon enough though I was at the entrance to the Coire and working out the best place to cross over the river and start my gentle traverse up onto the Stob. It must have been my lucky day. I managed to find a reasonable place to cross the river and didn't get any wet feet

After a slow start on my rising traverse I came across a wide shelf heading gradually up to the ridge which sped up my progress no end. Once on the ridge it was then easy walking up to the summit of Stob Ban. One down, three to go

So it was quickly on to Stob Choire Claurigh. The decent off of Stob Ban was probably the worst part of my day. The path was rubbish, being steep and very very loose higher up

I was certainly glad to be at the bottom in one piece. View back up the Stob Ban decent

The path up on to Claurigh was straightforward, giving good views back to Stob Ban as I made my way up. View back to Stob Ban from ascent up Claurigh

The wind was really picking up though and I was getting a fair old buffeting as I was making my way up Claurigh. I wasn't sure what it would be like on the ridge if these gusts kept up, as I was struggling at times to keep my balance on my way up onto it. It turns out the gusts remained for the duration, but it didn't have any major impact walking the ridge.

Soon enough I was on my second summit. And what a view of the delights to come

Who could ask for more? Walking the ridge was magic

All along there is a good path, which has its airy moments, but nothing of any technical difficulty and no exposure. There were a few moments where hands were necessary for balance, but nothing serious at all. Everything was a joy Walking along the ridge A view from the ridge

What there was though, was lots of was rock. Well, these were the Grey Corries after all

Loving it I most definitely was, but my poor, aged knees where starting to feel it the further I went along the ridge

As the views ahead of me changed, so the views behind opened up as well and as I was able to look back the real magic of these hills opened up for me (a down side of approaching from Glen Nevis is that the hills are hidden for much of the approach and you miss the effect of the quartzite slopes). Zooming in on Ben Nevis Well, I thought it was my final challenge. Somehow in my eagerness to tick my fourth of the day I had overlooked the small matter of Stob Coire Easain

I'm sure I could hear my knees groan at the thought of the up and over of this little nuisance. What I didn't realise was that this leg (no pun intended

) of my journey was probably going to be even better than the main ridge. From Laoigh Stob Coire Easain looked innocuous. It wasn't until I started the steep decent to the bealach with Sgurr Choinnich Mor that its beauty is revealed. For a short section it's steep, rocky and narrows superbly. I'm by no means the most confident in these types of situations, but I was loving it. I dropped down from the crest toward the bottom of the scrambly section - down onto a rotten path, the only compensation being that it gave a nice shot of my final munro of the day By now I was shot to bits. My knees knew they had been in a walk and the ascent up onto the shark fin of Sgurr Choinnich Mor was the steepest of the day. There is a good little path up onto the summit and even in my state of exhaution I was up there soon enough, where a good entertaining path takes you all the way to the summit - past the intriguing fissures along the way The views though were mighty in all directions, including back along the main ridge and the Mamores This was a great walk and a great day out

The main Grey Corries ridge is excellent and made for a great day. Adding on Stob Ban and Sgurr Choinnich Mor just increased the challenge and made the day even better. Boy, have I had sore feet and knees today, but so what....the smile hasn't left my face all day

One to be proud of PeteR!

Some great weather in the UK just now. Good set of photos and an enjoyably long day

Been years since I was sast in the Grey Corries - nice to see them again.

Superb report PeteR, not sure my fitness would let me tackle this at the moment!

Looks a great day out Peter. What made you do it that way round?
Only asking as I'm beginning to think I might prefer to do any tricky walking (ridges) while my legs are not as tired.

skuk007 wrote:Looks a great day out Peter. What made you do it that way round?
Only asking as I'm beginning to think I might prefer to do any tricky walking (ridges) while my legs are not as tired.

Thanks. A couple of reasons for this route skuk007. It was different from the standard approach, so that appealed. Also, read that the track yoiu have to drive down on the Spean Bridge side is a bit rough and not sure my car would have coped

Really enjoyed this approach though. At one point in Glen Nevis I 'misplaced' the path

but the walking was reasonably easy. If you locate the ledge up Stob Ban then that makes it so much easier to get up. The ridge itself is great, with path all along. It all comes highly recommended