A small addition to this walk is a few photo's when we presented the cheque to the Donna Louise Trust (http://WWW.DONNALOUISETRUST.ORG), the actual final sum was £2087 which was worth the hard work of the 12 hour walk. An interesting statistic from the representative was that the money from the government only accounted for 44 days a year leaving a very big hole to fill, our total will help towards making the childrens final days more comfortable. Lisa with yours truly 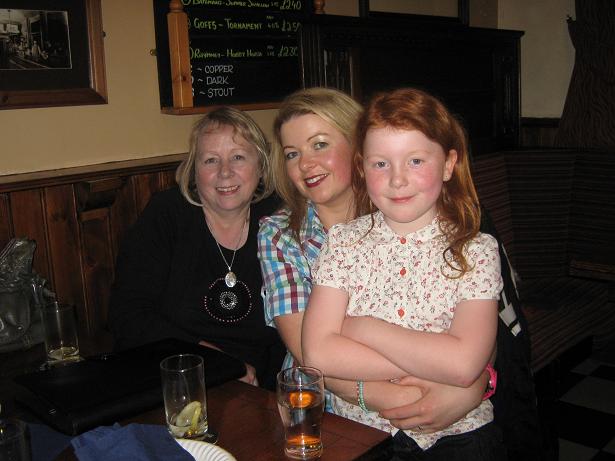 Hello everyone from a tired Sue

this weekend was the time for our charity walk, D-Day the 6th June, proceeds were for the Donna Louise Trust which looks after children with terminal illnesses. We gathered on Friday night at "Base Camp"

and already knew it was going to be wintery conditions for the upcoming trek. Excitement and the over zealous fellow campers meant a sleepless night, at least until Alan "woke" us at 4.00am

We kitted up and had our breakfast prepared for us by the best chef ever, Chilli. It was 5.20am when we set off in appalling weather for our marathon

Route_Title.gpx Open full screen  NB: Walkhighlands is not responsible for the accuracy of gpx files in users posts 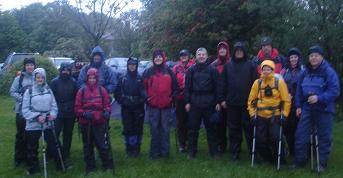 We were camped not far from Pen-y-ghent and this was our first view of the summit. The conditions were still bad as we conquered the hail to summit Pen-y-ghent at 6.50am. 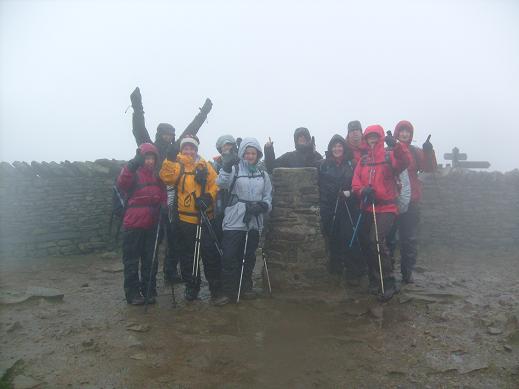 The whole area was sodden and it was like a winters day. It was 10.05 am as we reached the first rendezvous point, a chance to top up drinks or change clothes etc, sadly too wet to sit down so we were not long in moving on. Although it was bad we couldn't miss a photo opportunity with the Viaduct. On the right of the next photo was our zig-zag route onto the middle ridge which took us towards Whernside. 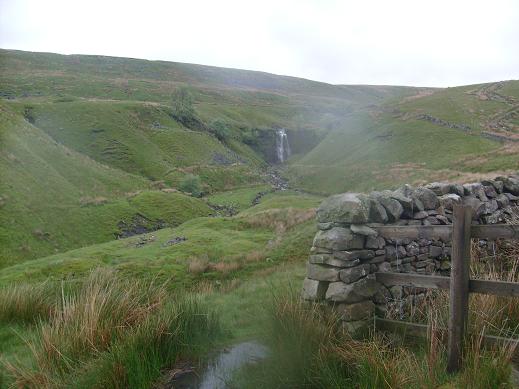 It was a little clearer as we could see where we had come from, Pen-y-ghent. We reached our second summit at 12.10pm, Whernside. We had been joined for this section by Commander Conroy's daughter, Tracy, and grandaughter, Alice. 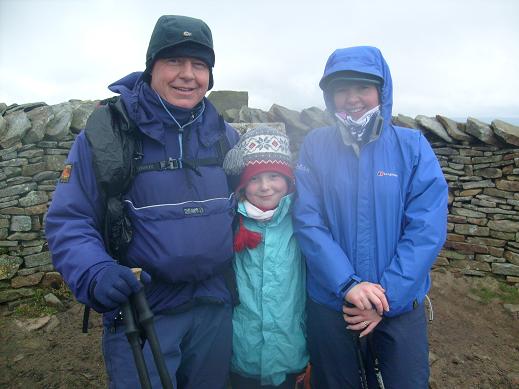 My first time on Whernside

It was clearing a little and we could see our next objective, Ingleborough. I was struggling a bit now as we reached Ingleborough, but quite a few were having their own little battles, bites, blisters, muscle aches etc. Still,this was our third summit at 3.42pm and nothing was going to stop us now The last leg can only be described as tortuous but we rolled into camp just outside the 12 hours but time didn't matter, we had all done the 24 miles, even those who were stopping after two tops carried on. Alan was proud of us all and even though I was shattered we celebrated in true style. The whole weekend was fantastically organised by Alan and it went like clockwork, he had managed to get all group 2 to the end, group 1 had been quicker led by Seth but it was a group weekend and everyone really enjoyed it despite the weather. 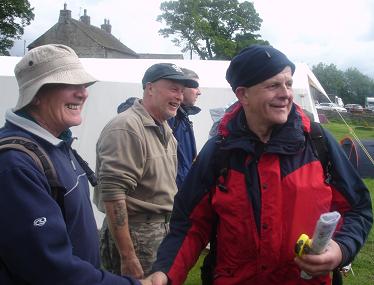 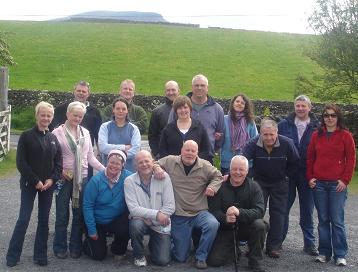 It was a fantastic weekend and a big achievement, I hope we have raised lots for the Donna Louise Trust and will let you know, everyone played a part, thanks to all the others for their help and especially we would all like to thank Alan, YOU PULLED US THROUGH

ps The map can be centered to see all the route

Congrats Sue - great stuff for the whole group to complete it too. What a shame about the weather... you'll have to do it again in the sunshine now

As I hit camp my first words were never again

Super effort Susan,well done to you and the gang!

Thanks Garry, quite proud of the achievement, very busy, masses of people doing it, don't feel too bad now I have had some sleep

Enjoyed reading that report Sue, it sounds like you and the team had to ‘dig deep’ at times, especially given the weather you had to endure. Great effort non the less and I’m sure the charity will be more than grateful for the monies raised by you and your group.

Thanks very much Paul, going to the Lakes on saturday so I am resting up this week

well done wet people, you must have been very tired, and wet. good views, and a good time by all. 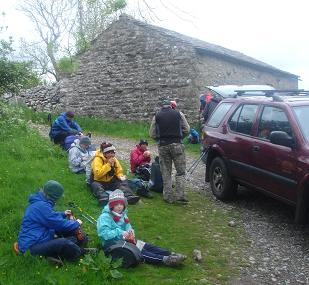 Group 2 after climbing Whernside at Rendezvous 2

Group 1 arrive back at camp With Paul and Seth on arrival, look better than I felt

Well done Sue and the gang, a magnificent effort in less than ideal conditions.

That ones beyond me I would still be out there, just too slow! Where oh where has summer gone that day when you where on Snowdon and I was on Moel Siabod seems but I distance memory!!!

I did it the other year for my favourite charity (as I'm from Yorkshire, I more or less had to anyway;-) - we had the opposite weather - the hottest day of the year - it was unbearable (and I like hot weather, although not necessarily for going up mountains). My question is: why on earth did you all set off at 0520?! You can see from the very early time you finished that you could have set off at a more normal time. We set off at 0820 which I found relatively civilised (would have been 0800 but half the group never turned up).

Sorry for the delay in replying, we set off early for two reasons, we didn't know how long it wuld take and did't want it to be 9 or 10 at night, also the camp was so noisy, I only slept a few hours

Yeah I can understand that about the campsite! They can be really noisy can't they - time they had 'serious walkers areas' so you can get some sleep!!

Hello, I have put some photos of the presentation for you to see, thanks Sue