Having climbed Stob Dearg on the Buachaille Etive Mor back in 1994 and again in 2008, I figured it was about time I got my butt down the other side of the Buachaille's long elegant ridge. Surely 2011 would be the year.

The original plan was to camp overnight around Loch Awe and climb Cruachan, but a late change of plan that took into account the girls being with us, landed us in Glencoe. A good night of refreshments and banter on a windy overcast evening passed quickly and was replaced with a splendid morning of clear blue skies and a slightly foggy head

We set off up the Lairig Gartain at around 9am and with the strong winds gliding us up the glen, we were soon at the point to cross the River Coupall. The path up to the bealach between Stob Coire Altruim and Stob na Doire is a good one although a couple of small sections require a bit of care. After a quick pitstop we headed up to Stob Coire Altruim, with the obligatory shot of Stob na Doire on the way. From here we headed along the meandering ridge towards our goal of Stob na Broige. The wind was fairly shifting, and my wife was experiencing a slight dose of squeaky bum syndrome

. Having only done a couple of peaks previously it was understandably a little discomforting for her. A few reassuring words later and somewhat less frozen with fear, we headed on along the ridge to try and catch up with the others who had been motoring since the bealach. 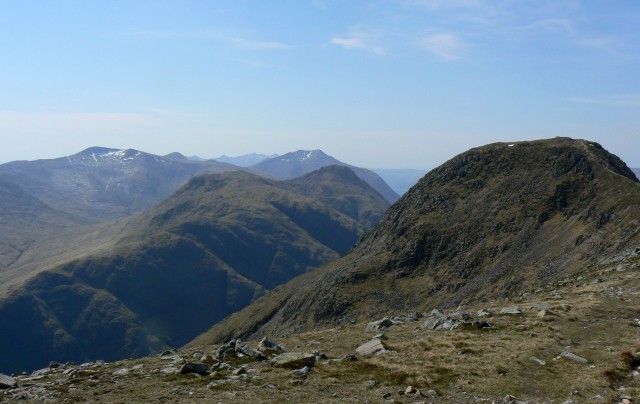 We were soon at the summit and scoffing some well earned nourishment, before a picture just past the summit (out of the wind of course) and a few surrounding summit shots. We were quickly back at the bealach where the route back out was clearly laid out in front of us. The descent on a warm afternoon was delightful and we were soon back down at the river. The path along the lairig seemed longer on the return though, was this the headwind?, was this the jaded legs? or was it just cause I wanted a pint....

Well done on finally getting to Stob na Broige. It's a great hill and looks like you got perfect weather.
I see a few hats in the summit shot so the wind must have been a bit nippy still.