As part of an overnight trek into the Grey Corries, Darren and I had decided to tick off the two Innse Corbetts prior to a recce round the Lairig Leacach bothy and a fine evening stroll up the coire between Stob Ban and Stob Coire Claurigh. It was to be a very memorable trip as we really had the finest of conditions. We parked the car, got ready to roll and I prepared myself to only take in all I would need in a 35-litre rucksack. Would it be enough? We set off at great speed along the land rover track and happened upon a rather unusual gentleman. He was a little wooden to say the least. We made fine progress but as began our climb up Cruach Innse, the heat took its toll. Jeezo, would we even get to our pre-designated camping spot just below Stob Ban?! No matter, on we pressed and as we topped out on Cruach Innse, we had fine views across the Easains, Sgurr Innse and Stob Ban. Not a soul around - the beauty of the Corbetts - not that I'm unsociable of course. We descended quickly to the bealach and then began the steepish climb up Sgurr Innse. Again, this was a mighty wee peak, which we could only really appreciate from our 'unanticipated downclimb' - others have described such manoovers as 'untechnical' - I like to think we showed aptitude and proficiency but it may have only gleaned a B+. As we looked back, we could see the shelf, which would have made things easier but it's half the fun! We didn't muck ahout as time was getting on and we wanted to catch the sunset from Stob Ban. We had a brief recce round the bothy and then continued up a fine path to the bealach, taking time out to re-stock our dwindling watter. At the bealach, we found a perfect pitching spot, camped up (I'm free - again) and had oor dinner before an evening stroll/scramble up Stob Ban. What a brilliant sunset it was (as others will testiclefy) and we took a gamut of photos when suddenly, Darren took on the appearance of something not of this terrain. The developing darkness and sunset with the camera aimed at his silhouette projected an awful image and made my spincter loosen. He was the Grey Corries Ripper! Aiiieeeeeeee! I left him to it and scarpered down the tricky scree slopes to open the hip flask and calm the nerves. It was a pretty cold night and I slept little. At 0510, just as I was drifting off to sleep, Darren awoke me with a shout that the sunrise looked 'awesome'. I'll f**kin sunrise ye....oh yes, it was rather lovely. We revelled in that, breakfasted, then de-camped (free I am not said Yoda). We were on top of Stob Coire Claurigh by 0710 and Darren had nabbed the 1st Munro top, Ceannain, by 0740. I then received news that Bin Laden had been killed and that they had thrown him in the sea - I thought it was rather ironic that in a million years, he'll be oil. Our romp across the Grey Corries was memorable with crystal clear visibility, a somewhat biting wind but beautiful conditions. A number of spots lend themselves to some amazing shots as hopefully this report depicts. Our walk across to Sgurr Choinnich Mor was also a delight although the eventual descent back to the car via the disused tramway did result in an unexpected 'a cheval' manouevre, which was precarious. 2 Corbetts, 4 Munros and I'm ready for the Munro 50 challenge. A fantastic 21 hours. Cruach Innse summit - to the Easains That's one small step for aiiieeeee..... The boffy to the Ban 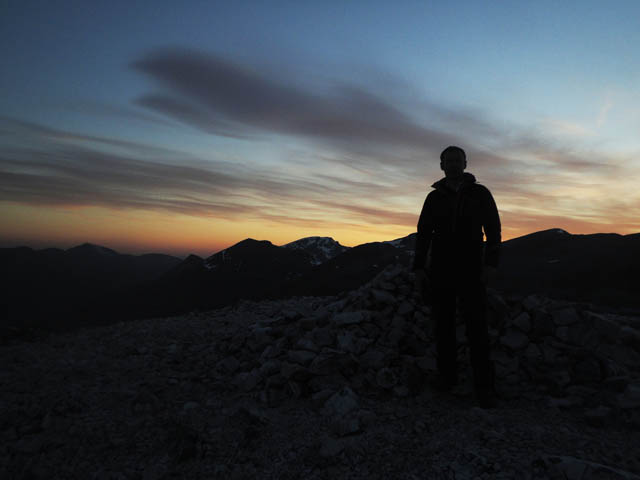 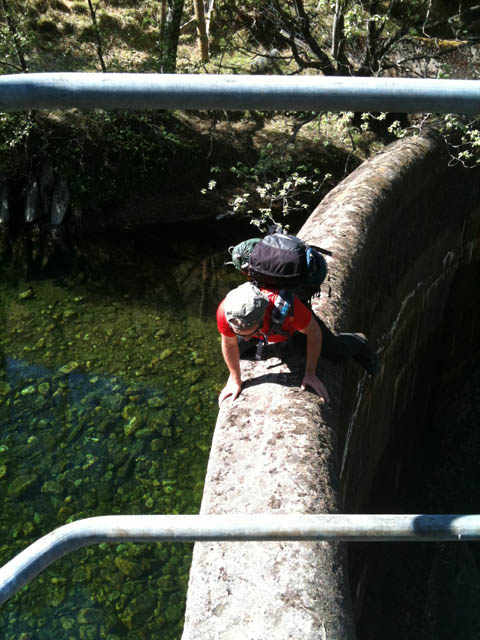 Great walk, captured beautifully - what the hell is the ripper doing to that dam

.....I bet there is an internet site for that

Great stuff Kev, I remember that dam and the whole bit across was a bit tricky when I did the Grey Corries. I remember being completely freaked out by the wooden minister too, creepy eyes on that thing! Without being overtly patriotic ... concerning OBL I will only add

Dunno how you manage overnight with a 35l....that's the size of my daysack

I could have done with a 36 litre! I was parched at the end. A fleecy top wld have been better too!

Nice report and . Was up here on Friday avoiding talk of wedding dresses and Shergar, although I thought I was doing well just doing the four Corries Munros. It's a great ridge

I feel a winter epic coming on

ChrisW wrote:Great walk, captured beautifully - what the hell is the ripper doing to that dam

.....I bet there is an internet site for that

excellent stuff Kevin. Cracking pictures. Bet you guys were a bit nack'd after that mammoth walk

Now that you have summed up the walk perfectly, there is no need for me to bother with a report but here are a couple of those panoramas I took

Looked worth the effort though. Nice one

Great stuff there Kev & all the best for the upcoming 50

As ever,a very enjoyable read. What do you think about the pair of corbetts? I thought they were pretty good hills,probably the highlight of the trip we did when we were in that area last.

Excellent stuff gents. Now I know I was right to spend the Bin Laden Bank Holiday green with envy knowing you two were out there! Isn't Sgurr Innse a corker of a hill! Kev, that looks like a nice little warm-up for next week - I'll have my work cut out keeping pace next Thursday! And Darren, what's happened to your count??? 99 - how'd that happen??? I thought I was only joking when I said you'd be overtaking me soon.

Good luck with your 50 munro challenge!! Hope you're getting plenty of rest!!