Blaven the previous day had been my first proper hillwalk on Skye but for this perfect weather weekend I wanted to step it up a notch and tackle something a bit more challenging. Sgurr a' Mhadaidh (Sa'M) and Sgurr a' Ghreadaidh (Sa'G) seemed a good route choice and left the option of continuing to Sgurr na Banachdich (SnB) if things were going well.


Cuillin.gpx Open full screen  NB: Walkhighlands is not responsible for the accuracy of gpx files in users posts
As I left the car at Glen Brittle Youth Hostel I was a little apprehensive. This would be my first outing on the Skye Cuillin and the wind was gusting along the glen - nothing to deter me on any normal hillwalk but strong enough to make exposed scrambling a daunting proposition. I decided to play it by ear. If I reached An Dorus and I felt uncomfortable I would just turn back or maybe bag one munro.

The excellent path climbs easily from the YH by the Allt a' Choire Ghreadaidh passing a couple of waterfalls and a large waterslide. These were probably not looking at their best due to the very dry spell of weather but would be great fun for a short walk with swimming trunks The corrie topped by Sgurr Thuilm, Sa'M, Sa'G and SnB soon came into view and looked more impressive with every approaching step. 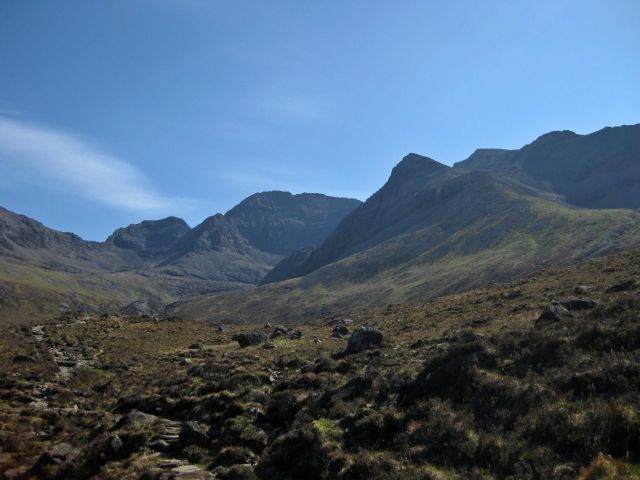 Soon I was at it's lower level where I had a break in the dramatic setting. Following the right hand side of the stream I ascended another 100m into the upper corrie now beneath the towering Sa'M and Sa'G and the notch between them of An Dorus. I couldn't quite believe this scree gulley was the actual route as it looked so steep and loose but figures moving high above reassured me that I was on the right track. It was hot and I was aware that the wind had dropped to nothing but assumed this was because I was sheltered by the mountains and expected it to be blowing on the ridge. The scree was not too bad and after a fun scramble up the final section I arrived at the narrow gap An Dorus where I had another break. I was very pleasantly surprised to find the air almost completely still The final climb to the summit of Sa'M was short but easy fun scrambling without any real difficulties. my first ever view of this magical looking place

The summit views to Blaven, Loch Coruisk, Sgurr nan Gillean and south to the day's next targets were amazing. I had made my mind up that I would continue past Sa'G and on to SnB because I was feeling good, the weather was perfect, just the 2 munros would have made for a shortish day, and I didn't fancy the descent back from An Dorus on the steep scree (perhaps I over analyse things...

Back at An Dorus the first scrambling move up Sa'G requires a little care but in the dry conditions seemed easy enough to me. The route finding was a less straightforward than Sa'M but lots of hands-on stuff was part of the fun. After another short break I was at the summit and could now fully see my onward route. My Cicerone guidebook describes the ridge to SnB as requiring "great care as it narrows to a genuine knife-edge arete with a delicious degree of expesure on both sides. This can feel intimidating" and this site calls it "perhaps the narrowest arete in the whole of the British Isles, and sensationally exposed... Taking this route is very committing, as there are no practical descent routes until Sgurr na Banachdich is reached, a whole kilometre of sustained scrambling further on". I have no basis for comparison having not done An Teallach, Aonach Eagach, Liathach, CMD etc. so I will trust to Paul's judgement I took a deep breath and set off, carefully plotting every foot and handhold. The section before and after the SW top of Sa'G is quite sensational and, without climbing gear, I had to backtrack a couple of times and take a bypass (of sorts...) rather than stick to apex of the ridge. At one point I was sat stradding the arete and shuffled along on all fours - it was exhilarating but not a place for vertigo sufferers! [The photos don't really do this section justice making it seem a lot less narrow than it really is. Part of the reason for this was my refusal to stand up fully on the crest of the ridge for fear of falling off

.] As the ridge curved toward SnB it widened slightly removing some of the exposure but still requiring care and constant scrambling (as my scraped hands and knees will attestify to). I scrambled up the first two of the Three Teeth but skipped the third on a path to the right - by this stage I was happy to have a few yards of good old fashioned walking.

I scoffed a ham roll at the col ready for the final scramble over Sgurr Thormaid and to the summit of SnB. Sgurr Thormaid bottom left with Teeth just behind it This section was good fun with some easier scrambling and without the nerve shredding exposure of the descent from Sa'G. At the summit I had a long shut-eye break in the now very warm late afternoon sun. I didn't want to leave but eventually roused myself for the descent into Coir' an Eich and walk back to the outward path. This was not much fun on the seemingly ubiquitous Skye scree which seems to be of a finer variety than others and made footing difficult. However, I managed to get back to the outward path without landing on my behind. 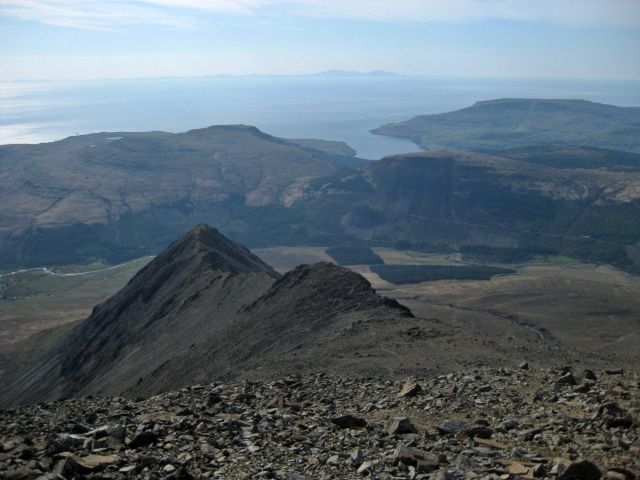 Over the final 1km and drive back to Portree I was able to reflect upon a quite spectacular day - possibly my best ever on the hills. It was a perfect storm where all the elements required to make a special day came together. It's a route which required severe concentration and commitment and is not one for the faint hearted nor for a day when there is much more than a slight breeze! Despite that, I can't wait to get back up there and would recommend this route to anyone keen to take on an exciting but not particularly technical long scramble.

Some great weather and fantastic views there. Rather envious i must say.
I was intending on heading to sky next week if the weather held up. Looks like my diesel's safe!

That ridge scramble sounds intense, can't wait to have a go, hopefully later this summer

This is one of the best reports I've seen from you mate! Killer pics and a courageous effort alone!

I know I'd love a route like this....and am usually out solo....but I think I'd be too chicken to try it at the moment! Well done for going for it

Loved your report. I think I would have kept a very low centre of gravity as well. You're very brave not to turn back

As was said earlier, you will have put other users in the mood for heading out to Skye. Funnily enough the Morar hotel has some smashing deals on just now !!!

Woah! Can't believe I missed this one!

Looks like you had a great introduction to the main ridge then - I'm pretty sure weather like that wil bring you back again. Having done that, you should be pretty well prepared for most of what Skye can throw at you - the route from Sgurr a' Ghreadaidh across Sgurr Thormaid is one of the more difficult stretches of the ridge if memory serves me (which it doesn't very well!)

I've not really spent much time on the Cuillin on my own. That would certainly add an interesting dimension to the more awkward bits

Tremendous report - great pics - particularly (14). If I ever get around to doing any of these I think a guide might be the order of the day

Will be useful to me. I'm off to Skye in 2 weeks time, these Munros are on my to-do list... If I don't run away screaming

Incredible report that had me hanging onto my desk by my fingernails. Fair play to you and on your own as well !

Superb photos that brought out the atmosphere of The Cuillans.

Missed this WR first time round and really delighted to read it now. I only managed Mhadaidh with full volume vertigo -http://www.walkhighlands.co.uk/Forum/viewtopic.php?f=9&t=5391 (though heading for Greadaidh next week). So I am well impressed with your achievement - the report and the pics are great.