Ever since i saw a picture of the green lochan i'd wanted to check the place out, this route was perfect for it. My first Corbett as a bonus.

Made the very short drive from Cairngorm Lodge to the Glenmore Park visitors centre car park.
Set off onto the path into the woods.Startled a couple of deer as i strolled along. Hoped to get another glimpse of them further along the path, but no such luck. Like the previous days walk, nice going through the forest, plenty of greenery and flowers to be seen. Great view of Cairn Gorm and it's neighbours out of the trees. Hard to believe that was the same mountain i'd struggled up just a couple of months before.

I knew this plant was something strange. Knew it was carniverous, but had to turn to my books for the name. Common butterwort. Pity it wasn't in flower yet, but i know where to find them when the time comes. There were a good few of them to be seen. Common Butterwort with some of it's breakfast lunch and dinner on display.

Plenty of bog violet to be seen. Loads of these white flowers with a yellow centre.Anyone tell me the name? (note to self- get around to buying a flowers book). Unwittingly interrupted some crane fly hanky-panky. They even ended up on my leg at one point. How dare they?! Dirty beggars. Secret missile launch from a super-secret mountain hideaway? Or just the sun and a vapour trail? You decide.

I was eagerly awaiting the sight of green lochan, and hoping i'd get teh chance to see some of those leeches. Bright sun shining in the clear blue sky, it was a sight that certainly did not disappoint. Easily mistaken for a tropical paradise. 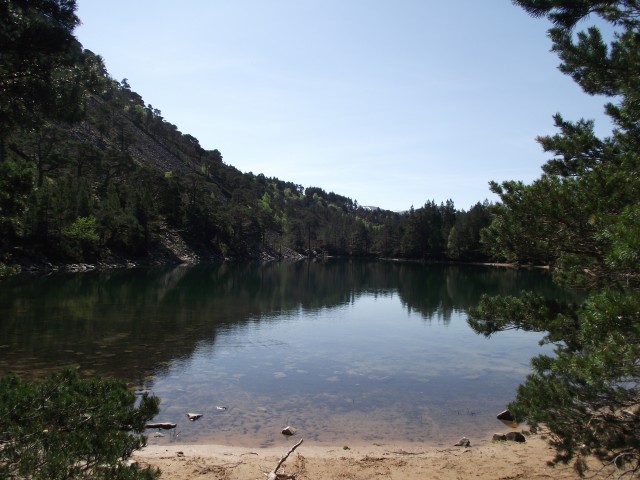 green lochan from the north bank.

Didn't take long to see leeches. I spotted the first as i was climbing down to the bank and raced to get some pic and video. A fair few of them to be seen. A shedload of caddisfly larvae to be seen. Hard to spot in their twig and bark camouflage. A drink to whoever can spot the individual in this pic.

It was before noon, but i figured i'd sit down for lunch and take in the view. A couple of other folk there. One guy up the north shore of the loch who went in for a dip, and two guys there taking pictures. Tranquility spoiled a little when two women came olong with a trio of digs and the calm water was distubed by splashing dogs and tossed sticks, but i like watching happy dogs at play.

Dragged myself up to continue the wal. Onto Ryvoan bothy. Never come across a bothy before so i popped my head inside. Nice little place, may end up here one night in the future. Fairly steep going up to Meall a Bhuachaille but the path's good and i wasn't struggling, the fitness is definitely on the up. Nice big shelter cairn at the top. I sat down and ate here again. Breezy up here, but i was well sheltered. Good view of the route over to Creagan Gorm, but i was just heading back down to the car. 2 days fine weather and walking done, time to head back down the A9 to Fife. The usual over-taking idiots, but thankfully a jounrey without incident.

I was having problems posting this in the main report.

Great panorama of the lochan.

Great panorama of the lochan.

There a few cyclists about. I'd definitely take a trip back there with a bike. Cracking landscape to pedal through. the other three guys in my hostel room were cycling on to Tomintoul on the day i did this.

Great photos there Nathan, I especially like when flora and fauna pics are included in reports. I'm heading up to Aviemore next weekend so might try this walk as it was too snowy when we were up there for the WH meet.

The green lochan looks amazing! Knowing me I'd spend so long taking photos there I'd lose track of time and my walk would end there