Three of us set off from Essex at 8.00 on the Wednesday evening to arrive in Tesco’s car park, Inverness at 6.15 the following morning. Having stocked up on a few essential pork pies and Tunnocks wafers we tucked into a ‘Big Breakfast’ – I was mildly concerned as to what might be in the feast as it was only £3.20. However, it tasted good and would have been more than welcome after ‘Rice Satay’ – more later – it had that knack of repeating.

Off then to collect Dave, staying in a cottage at Badluarach – along the coast from Dundonnell – great cottage overlooking Little Loch Broom. It soon became obvious that I was not experienced in the fine art of minimal backpacking. Should I pack two or three kitchen sinks? I was advised that one would be quite sufficient. After Neill and I posed for a ‘now’ pic to match a ‘then’ pic (August ’77), we set off striding purposefully (?) up the track towards Fisherfield. There were a couple of showers on the way, but that was the only rain we saw. Made it to Shenavall feeling rather tired – last night’s drive had begun to take its toll on me (and Neill). Enjoyed a hearty meal of beef stew (Look What We’ve Found – very good, but heavy to carry) and nearly cooked rice. The others camped, I slept in the bothy – very good too I thought and a fine introduction to staying in bothies.

Rose the following morning at 5 am to a stunning Shenavall dawn. 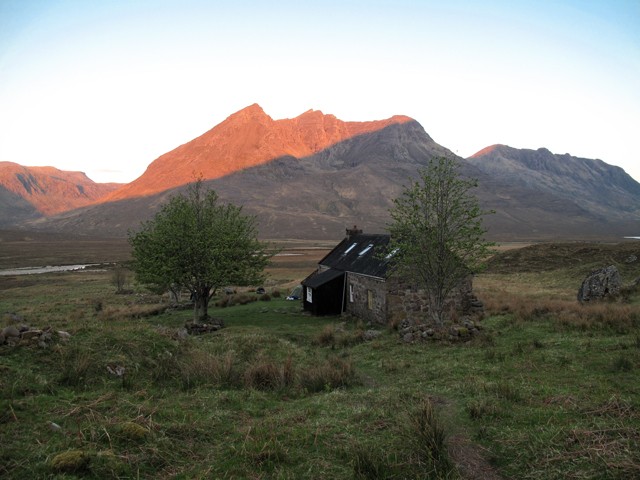 In my yoof we stayed at Ardmair and I used to think that waking up to Ben More Coigach was pretty much perfect, but the view of Beinn Dearg Mor must be on a par at least. Breakfasted on porridge (as recommended by Sir Ranulph) – was good. We had been advised to start early (tick), take lots of food (double tick) and take it steady – no problem with that one (tick). Off at 6.50 and walked up Strath na Sealga pausing to take a few pics along the way. Crossed Abhainn Loch an Nid without problem and started up the slopes of Beinn a Chlaidheimh. At this point a luminescent lemon-green shirt flashed past, one stride of his to three of mine. I would find out later what it was. With the exception of Dave (a runner) we toiled up Beinn a Chlaidheimh. Dave would wait patiently every now and again until we caught up. The last 200m is a grind – quite how IainG walked from Corrie Hallie to the top of Beinn a Chlaidheimh in four hours is beyond me. You can just make out Dave - already on the summit and getting cold!

Finally made it to the summit at 11.00 and called my wife only to be told that a certain couple were just walking up the aisle and my timing could not have been more inappropriate. She was glad that we were safe though! I felt that we had the better views! A bite to eat and off towards Sgurr Ban. By now it was clear to me that 6 Fisherfields was completely out of the question. Would I make two as I was feeling very tired …. that lacking in energy feeling rather than being knackered through walking. Once again it was being brought home to me that as I approach 60 my body does not recover that well when it misses night’s sleep. So I decided to bail out at Am Briseadh and drop back down to the Kinlochewe path. Neill had been finding it very hard going and reluctantly also decided to call it a day. Dave and Martin pressed on to Sgurr Ban. Neill and I found the descent straightforward, crossed the Abhainn Loch an Nid again and made it back to Shenavall by 4.00. Strangely, I was not disappointed; we’d had a beautiful day and made the right decision at the right time. I remember all too well the feeling of being completely exhausted and never want to feel like that again. The hills will still be there for another day, although I think we will be breaking it into several sections – so that’s several days!

At 6.45 pm the luminescent lemon-green shirt came striding towards me at Shenavall looking a fresh as a daisy. He’d done all six! Now this borders on superhuman; he’d started from Corrie Hallie at 6.30 and was walking back out (90 mins he thought) so he could catch last orders in Ullapool. He would have done the lot in 14 hours!

An hour later Dave and Martin returned – Dave looking as ever, unruffled; Martin very tired indeed. They had managed three before dropping back down into Gleann na Muice and walking out. Their reward was a close sighting of an eagle! Martin was ravenous and finished the remains of Neill’s discarded Rice Satay; he then promptly ate his own. The first spoon tasted OK, but it went downhill after that and I swear that I could taste it for the next two days. But what is the alternative? Our ‘snacky’ food weighed far too much really – we simply are used to eating too well and too much. A fine end to a long day

The night was windy, but followed by another glorious morning. Sadly, left at 10.00 and walked out seeming to have much more energy now than during the first two days. Although we stopped for pics of An Teallach along the way we made better time than on the inward journey! 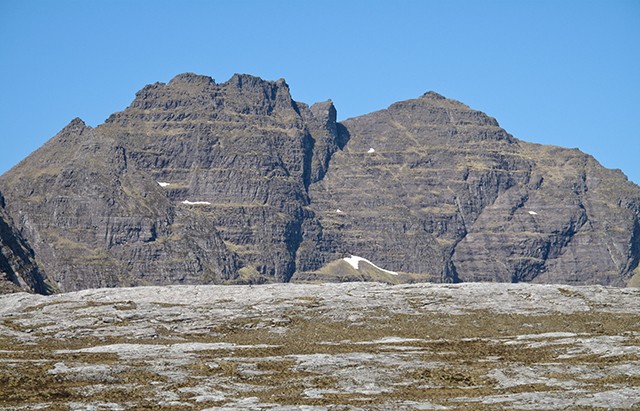 Stopped at the Dundonnell Hotel for a couple of beers – do like the local ale! Then back to the cottage and a wonderful dinner. I could tell that Neill felt better – he’d eaten real food and was arguing about the right (and I mean right) and wrong doings of numerous [lefty] politicians. The setting sun produced a great finale by lighting up Beinn Ghobhlach. Off the following morning at 7.00 am. Only 600 miles to go. On the plus side we get another bite of the cherry this year – back in the middle of June!

You got some great photos of the sunrise and sunset with some great colours. In the end, who cares that you didn't manage as many as you planned - you obviously had a great time.

Wish you guys all the best when you return in June.

Gives us oldies a bad name!

well if this is the sort of quality of report you get from "oldies", roll on the next 10 (ish) years

Wonderful effort there Nev,and by the looks of your pics it will be no hardship to return,looks an amazing place

Am trying to source the 'then' pic from Neill - will then add 'then' and 'now' pics.

Now looking foward to June - keeping an open mind on what we [try] to do - was hoping to do some in the Affric/Strathfarrar/Mulladoch area, but that could change depending upon the weather. Got a week this time so things should be more productive.

Best wishes to all, Nev

NevJB wrote:Finally made it to the summit at 11.00 and called my wife only to be told that a certain couple were just walking up the aisle and my timing could not have been more inappropriate.

Was she at the wedding

Don't think I've ever been to Essex, but I imagine it has a lot in common to Fisherfield

Bro,
Great post. Am I allowed to post FlipFlop walks I recommend on the Costa Blanca. Some of the scenery is spectacular and that's just on the beaches.

Fantastic report Nev and some cracking photo's - its a hell of a drag up here from Essex, maybe you guys should think about the Caledonian sleeper - a nice comfy overnight sleeper train from London Euston to Scotland if you book far enough out you can get a bargain berth at £20. here's a link http://www.scotrail.co.uk/caledoniansleeper/index.html

However you choose to travel back up here, I look forward to your june report

Re: Fisherfield Foray - a prequel 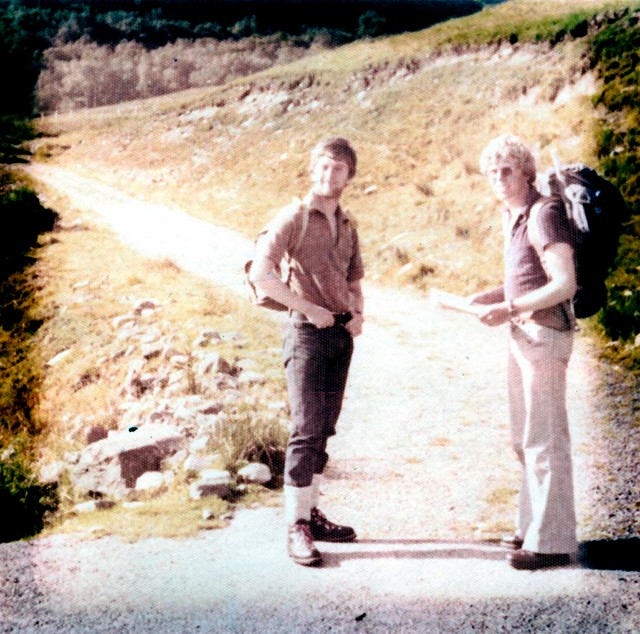 August 77 on our way to do An Teallach And a couple more gems from Aug 77 My wife was staying with our daughter and friends in London - glued to the tele. Not for me!

Neill and I used the Sleeper several for years - was just getting too expensive when factoring in the car hire - could never manage to book the 'seated sleeper' seats. Is certainly the way to travel though if you can.

absolutely brilliant - ahh, it takes me back - love the fashion sense ! and I thought my wearing sawn off denims on the cobbler in '84 was bad enough....

Aye..the Fisherfield foray, been fancying that for a while now.....thank you for a great report and fantastic/fun photos...

I love it - especially the retro pics and dodgy 70s hill fashion!