An hour and a half's drive from Glasgow took me to Forrest Lodge. Plan was to do the whole Rhinns of Kells ridge, including all seven Donalds, although I knew from the map this would involve a bit of thrashing through forest firebreaks to get back from Cairnsgarroch, the final summit, to the forest track which would take me back to the car. The appealing thing about this route was that I could curtail it and either descend from Corserine, or just miss out Coran of Portmark, the most northerly summit, if I felt low on time or energy. As it turned out I was able to make great time along the 9 mile ridge, especially after summiting Corserine, the ridge's only Corbett.

Leaving the car park at Burnhead Bridge (NX553862), I took the track SSW which climbs steadily through pleasant forestry for 2 miles, passing Burnhead. At the forest edge, a small but distinct hill path is joined. A fairly stiff pull gains the wide flank which leads for a mile to the summit of Meikle Millyea. From the flank the eye is drawn to the first section of ridge leading up to the smooth dome of Corserine, the high point of the day. Just over a mile brings you to the summit; following the rocky ribs all the way up kept it more interesting, although an old wall can be used as a handrail in bad weather. It felt great to be at the top, knowing that most of the hard work was behind me, and a good long ridge walk lay ahead. For me, the anticipation of a day spent at consistently high altitude, with time on my side and the weather set fair, is one of the great pleasures of hillwalking. The air was beautifully still, and skies clear, although visibility wasn't as good as it could have been; the ridge of The Awful Hand was hazy across the wilds of Galloway. Still, fantastic weather for April! 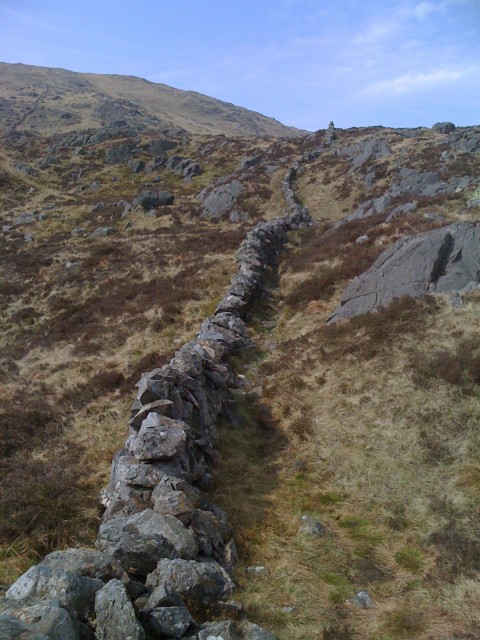 Wall to the summit of Meikle Millyea 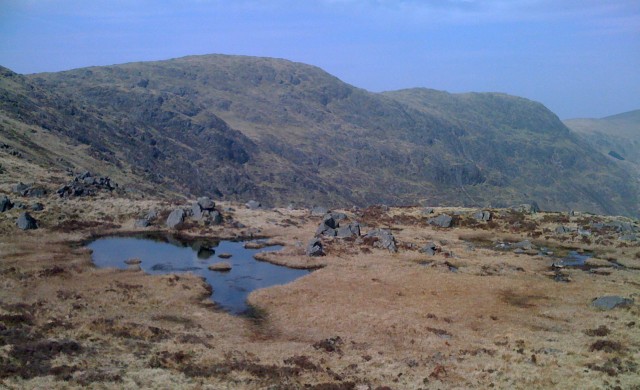 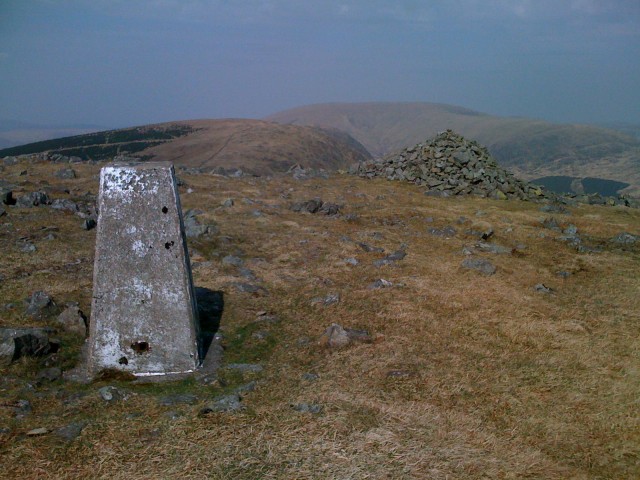 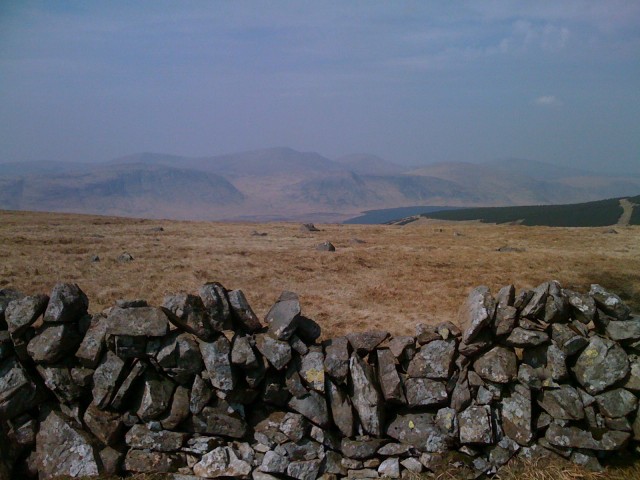 Having visited Meikle Millyea south top, it was time to begin the ridge traverse. First up were the knobbly tops of Milldown and Millfire, the plantations on the left hand slopes here creeping right up almost to the ridgeline in slightly sinister fashion. From the col between Millfire and Corserine, the going is smooth and grassy, remaining so for the rest of the ridge. A track leads eventually to the trig on the table-top summit of Corserine. Strangely, the eastern top looked higher, despite being 1 metre lower. I loitered here a while, always reluctant to leave the day's high point. 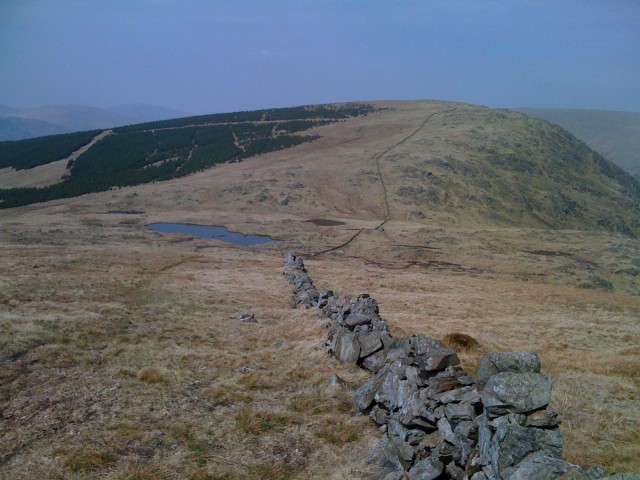 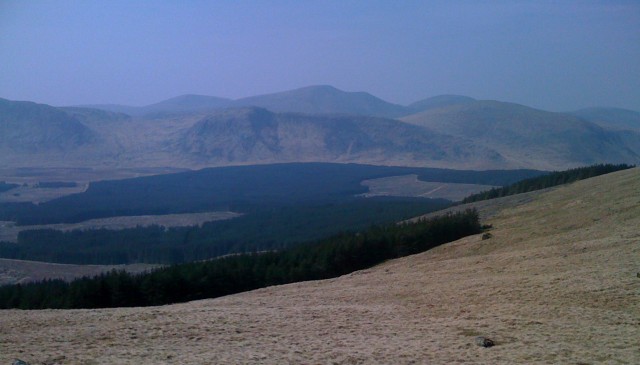 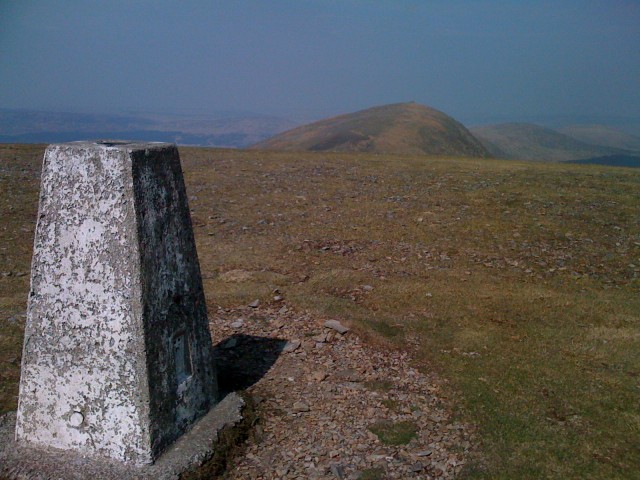 The route ahead was clear to see, a mouthwatering 5 miles of good ridge walking to Coran of Portmark. It didn't disappoint: an easy pull over Carlin's Cairn (topped by a giant sprawling cairn) was followed by a fast-paced grassy tramp over Meaul. Looking to my left hereabouts revealed a somewhat different aspect of Merrick and the Awful Hand to that seen on first gaining Meikle Millyea earlier in the day, a good indicator of the length of this ridge. 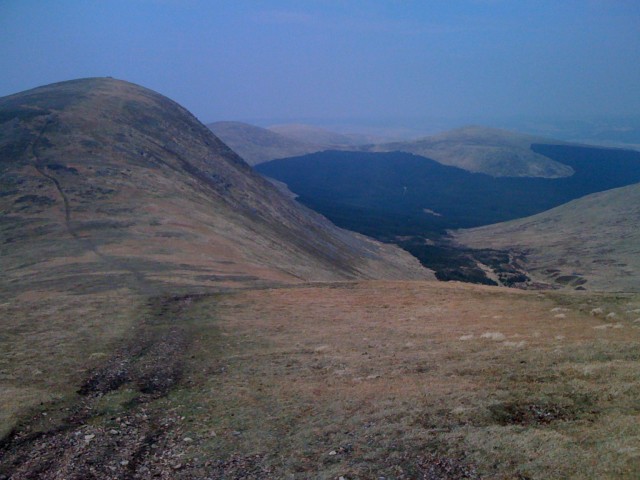 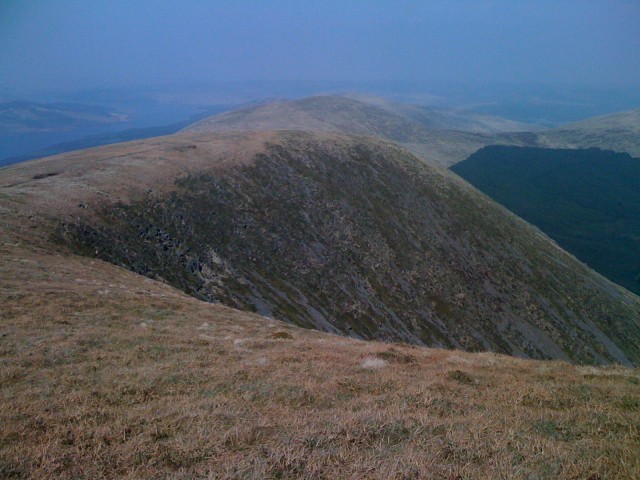 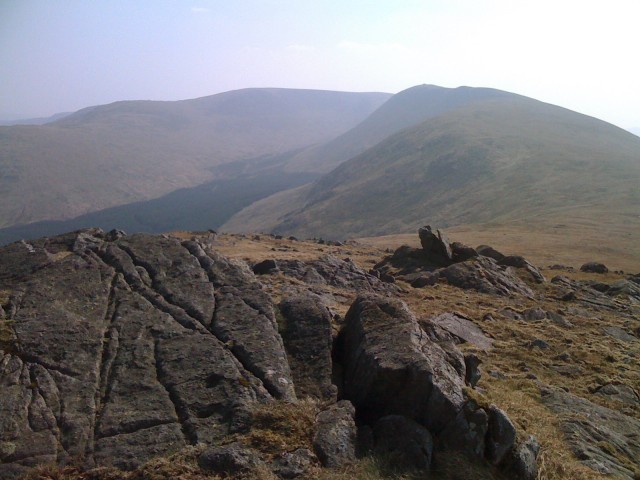 back along the ridge from Meaul 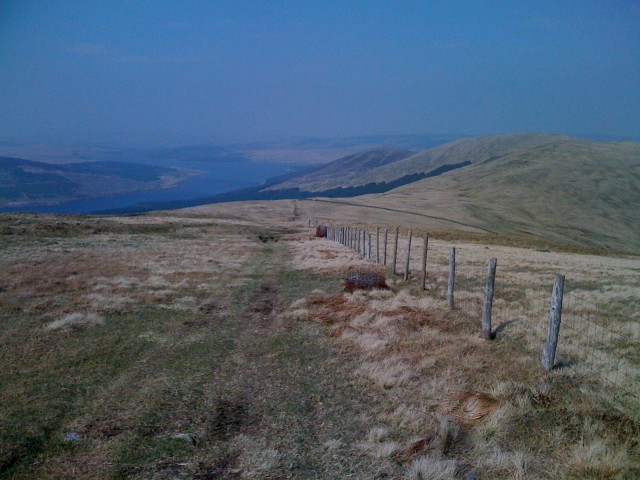 track to Coran of Portmark


I left the pack at the fence junction (NX501919) for a quick out-and-back to Coran Of Portmark. From here, the hazy form of Cairnsmore of Carsphairn was close at hand; one I've yet to climb. Legs beginning to tire by this point, I was glad of having just the one summit left. Retrieving the pack, I headed SE, aiming for the col (NX507912). The drystone wall soon brought me to the top of Cairnsgarroch, a fine vantage point from where I could view much of the day's route. It was also good to be able to clearly make out the firebreak I was looking for to access the track at NX521890. 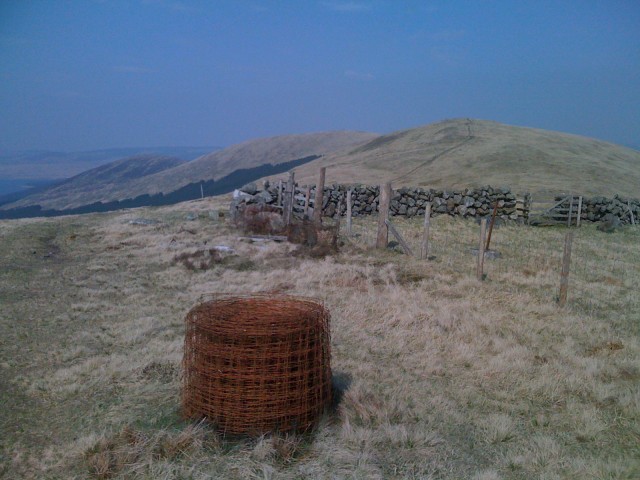 Coran of Portmark from fence junction I headed SSW from the summit over open ground to the outcrops of Craigchessie, then directly down the steep craggy hillside to the forest boundary, picking up the firebreak at NX515902. Patience was called for as I negotiated this boggy trough, with the odd fallen tree to keep me guessing, until the stream was eventually reached at NX517892. I found a pool in a bend of the stream by the forest edge that looked ideal for a dip... it was just about warm enough as well! Suitably refreshed, I soon picked up the track by way of easier, wider firebreaks. All that remained was a straightforward 3 mile walk back to the car park. En route, I disturbed a deer taking a drink at a stream, then a little further on, the unmistakeable figure of a pine marten crossing the track about 30 yards away stopped me dead. The wee guy stopped and stared at me for a couple of seconds, then sloped off into the forest to leave me fumbling with my camera! As I later found out, there's a healthy population of them in these parts.

I arrived back at the car with that familiar knackered/deeply satisfied feeling that only a long, full day on the hills can give me. It's the best drug there is! (of the ones I've tried anyway)

Date of this walk was actually 21st April, not 8th May... only just got round to submitting it though!

Excellent report - good to see the northern half of the Rhinns ridge too. ps. You can edit reports and change the date (I've just done it, but you can do this too)

Great pics and from the looks of them a belter of a day for a belter of a walk. I was looking to do these in two lots but this has inspired me!

Thanks for the detailed route back to Forest Lodge. Hope to do the same trip myself as soon as possible. Great photos too. JBD364