Am Bioran to Meall na Fearna (the South Earn Ridge)

Am Bioran to Meall na Fearna (the South Earn Ridge)

We all probably have ‘one day’ walks – you know, the hills we keep driving past and thinking ‘one day I’ll have to climb that’. Here’s one of mine, an obvious feature of the view on the drive from Comrie to St Fillans. Am Bioran seen across the St Fillans golf course.

Described in my trusty old SMC guide as ‘the finest, though far from the highest hill in this area’ it just had to be explored.

Another of my ‘one day’ hills was Meall na Fearna, the Corbett to the east of Ben Vorlich. On the map could be seen a long ridge running all the way to it from Am Bioran – and so the plan was hatched. Leave the car at Ardvorlich, cycle back to St Fillans golf course, up ‘the finest hill in the area’, and then a long high level tramp along the ridge. The chance to do it arrived when a fine forecast combined with an unavoidable late start which meant I had to go somewhere quite local.

By 11:30 I was off along the track shown on the map passing behind the clubhouse and heading for Wester Dundurn. Am Bioran from Wester Dundurn

Beyond the house a track (not shown on the 1:50000 map) took me to the end of the forest and I headed up the easy but well vegetated slopes in the middle of the picture to reach the ridge on the obvious level section. The view up the ridge.

I decided to keep amongst the outcrops and found a succession of grassy rakes which allowed me to climb steeply but easily upwards. Adventurous souls could well find some pleasant scrambling up there. The view back down the ridge.

From the top of Am Bioran the wide, trackless ridge undulated westwards and I undulated slowly with it through the heather, grass and blaeberry going over some bumps, round others and feeling constantly thankful that the peat hags were fairly dry. I passed over Beinn Fuath, Meall Reamhar and eventually arrived at Black Craig where the ridge finally turned South and headed for Meall na Fearna. The view East from Meall Reamhar The view West from Meall Reamhar There were plenty of deer in view who clearly weren’t used to meeting people up there. Here’s a group who had congregated on a rock, presumably to enjoy the sight of this aberrant human invasion. At least they didn’t have cameras ‘Hey look everyone – there’s one of them humans. Don’t see many of them around ‘ere’ Looking north towards Ben Lawers from the slopes of Beinn Domhnuill

After passing to the east of Beinn Domhnuill along a line of old fence posts a discouraging view of ‘the valley of a thousand peat bogs’ opened up. I remembered Canisp’s wise words that ‘if you are happy to count it as bagged, it’s bagged’ and tried to consider the Corbett as bagged. I failed. I considered joining Caberfeidh in ‘the curmudgeonly ranks of non-baggers’ but knew that if I did I’d just have to come back again so I descended into this ‘Slough of Despond’ as Bunyan has it. I managed to avoid the worst by keeping towards the west. 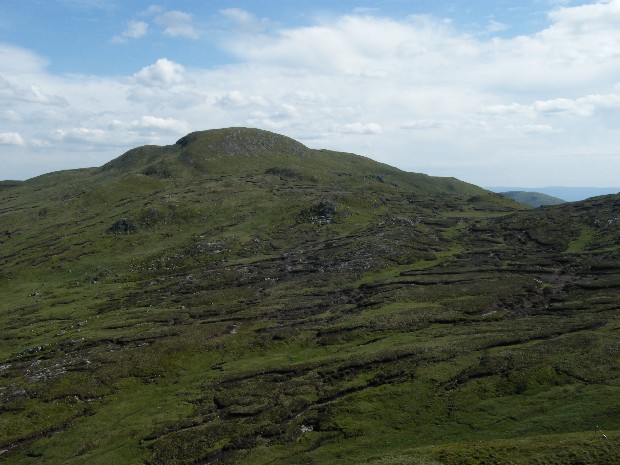 Leaving the bogs behind a final short, steep pull landed me on the summit and a decent view to enjoy with Ben Vorlich the finest feature. A descent due west brought me into the valley just South of the col between the two hills. The hoped for path (so confidently marked on the OS map) failed to appear so I just headed north through the fine, steep sided pass. According to the OS this is a path.

On the descent from the pass boot prints in the bogs suggested that others had been this way before and, eventually, a proper track appeared taking me down through the woods of Glen Vorlich to meet the main Ben Vorlich track. On a path for the first time all day.

Arriving on the road I saw people for the first time since leaving the golf course. They had pitched a tent on the shore of Loch Earn and had music blasting out from the car radio. It was then I truly appreciated the hours I’d just spent enjoying the ‘Sounds of Silence’

Is 4000 feet of ascent for a single Corbett some sort of record?

John Burgess wrote:Is 4000 feet of ascent for a single Corbett some sort of record?

Top marks for the report and photo’s

it looks a rugged ridge from Dundurn to Beinn Domhnuill.

John Burgess wrote:I remembered Canisp’s wise words that ‘if you are happy to count it as bagged, it’s bagged’ and tried to consider the Corbett as bagged. I failed.

you must try harder next time.

canisp wrote: it looks a rugged ridge from Dundurn to Beinn Domhnuill.

I must admit that I was hoping for a bit more rock and a bit less heather but it gave a pleasant enough walk.
And as for a lack of willpower believe me I really tried - as you can see from the photo there was every incentive to adopt a creative definition of bagged