I am rather chuffed with the superb route I did yesterday along the south Glen lochy hills. The Grahams guide seemed to suggest joining these up was difficult, but the forestry was no problem. I started on the lay-by 1 mile west of Arrivain, where you walk straight to the bridge crossing the River Lochy. Then I went along the railway a little bit to the west till I popped out of the forestry. I headed south from here over tussucky ground, climbing one deer fence, just to the left of the impressive waterfall to join the gentle west ridge up Beinn Dubh. Then ambled along the ridge over some lumps and bumps to the main summit of Beinn Chuirn. Dropping north east I spotted a route from the col up to Meall Odhar, so I dropped down steepish grass along the east ridge avoiding the steep cliffs, then directly to the coll. Over the deer fence, through the sparse forestry, and trending south onto the summit of Odhar. I skirted below Creag Bhuidhe, spotted a white hare, and across a peaty but not sodden expanse towards Sron nan Colan. Then the last bit following the old fence post to another bump, and then north to pick up the gentle path along the old lead mines back down. Once into the forest I kept straight down, right would have taken me to Tyndrum. Straight north, over the railway and to join the road by a point marked 266 on the A85. This took me 4 hours.
I was intending to hitch back, but after 15 mins at the lay-by I gave up and crossed the road heading north through the forestry to pick up a huge forestry track to the west. I followed this to the end, then squirted along the road past the house, to pick up the old road. This was a bit soggy in places, but not disastrous. The track ended by Arrivain, and rather then walking along the road, I went along the river to return to my car. The return section is part of the scouted out section of an alternative west highland way finish to Oban.
A fabulous day, cheating the weather forecast. And that on my birthday! 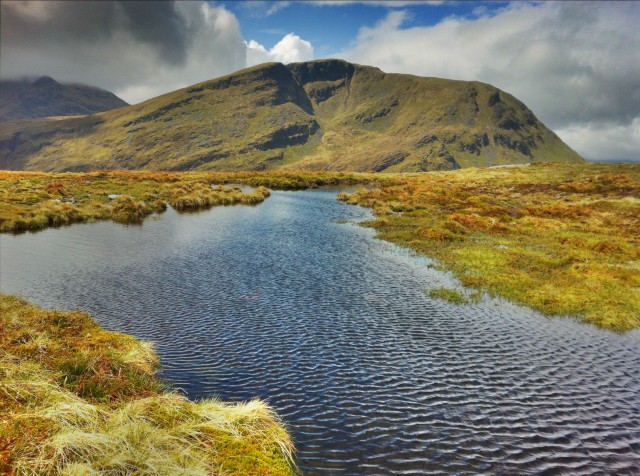 Renate wrote:I am rather chuffed with the superb route I did yesterday

Well you should be. I'm thoroughly looking forward to combining these two some time. Brilliant photo too - shame there weren't more like that! And belated birthday wishes to you!