Leaving the car park at Inveruglas follow the Walking the Highlands route until the top of Ben Vane. 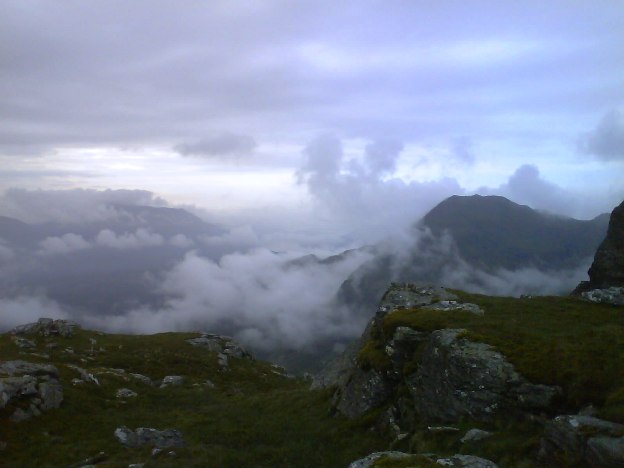 Cross the stream keeping to its left and follow up the glen heading nnw for about 300m where another stream coming down of the hill meets the one your following ,then follow this one up sw to the obviouse Bhealach then turn nw for the last 300m to the top of Beinn Ime. Heading sse from here you can drop to the Bealach a`Mhaim between Beinn Ime & Beinn Narnia then drop down the corrie into the glen of Allt Coiregrogain keeping the stream to the right go through the woods until you pick up the end of the track you left earlier to ascend Ben Vane and follow this all the way out .There is a monument at the end of the track here which means your in the right place. This is a demanding route and a bit of the beaten track but i did it this way because I've already done Beinn Narnian and the Cobbler together twice so wanted to do the last two Arocher alps on the same day (well i found it tough going)having done Ben vorlich on its own a few weeks ago .
Hope you give it a try thoroughly recommended. It doesn't say at the title but Beinn Ime is also a munro in this walk .

i was in englandshire this weekend and couldnt go on this walk with cj.. looks like i missed a good un

Good stuff cj, that's a mighty big dip between those two hills, especially with Ben Vane being so steep

Tell me about it Paul still got the aching muscles for the trouble.
Sorry Allan ,didn't notice that error but the pictures were taken with my 2 megapixel camera phone as the batteries ran out on the good camera that's why there isn't that many of them