What a fantastic day out this was!

James and I set off from the National Trust car park at Wasdale Head in fine weather and headed up the path towards Brown Tongue. The second stretch of that path, after crossing the river, is an unrelenting grind but isn't as long as I remember it being from when I walked up it twelve months ago. Ay the top of Brown Tongue we followed the path to the right towards Hollow Stones and then, after a deep breath, turned up the scree towards the entrance to Lord's Rake. That was a stiff climb and the scree is very loose but in a few minutes we were sat on a rock looking up the rake and across to the western crags of Scafell Pike. What a great place to see.

The Rake is extremely loose under foot and between us we sent quite a few rocks down the slope. Thankfully, there was no one following us so it didn't cause a problem but all the advice I have read about not following another group up is very good advice. Most of our ascent followed the wall on the right hand side of the rake, which itself is quite loose in places and crumbles when you try to take a firm grip. The slab at the top takes a bit of negotiating. James went around the right hand side and I went underneath it so it is possible both ways. That was by far the most challenging scramble I had done up to that point and it was a great sense of achievement to get beyond that stone.

The next down and up section of the rake is very straightforward and short. When we reached the bottom of the second down section we chose to have a go at ascending Red Gill. Just as we set off up the rocks the rain started. By the time we got up near the top it was soaking wet and extremely slippery. We reached a large, over-hanging boulder that leans towards you and was I just couldn't get a grip on it so we had to turn around and scramble back down, which was much harder than going up. We then headed up the final ascent of the rake, which is much easier than it first looks, and were up onto the ridge in no time. From the point where we left Hollow Stones to the top of that ridge was the most fun I have had on any hill. Absolutely brilliant stuff. Scary in places and with a few sections that certainly get the heart pumping but great all the same. It certainly isn't a place for the faint-hearted but I would recommend it to anyone who likes a challenge.

Once we reached the col between Symonds Knott and Scafell we were treated to a gale force wind and a hail storm. We were also now in the clag so couldn't see a thing but it was still a great sense of achievement to get to the top. From there we dropped down to Foxes Tarn and then down the gully to the bottom of Broad Stand. That gully takes a few awkward movements to negotiate and with the rain that was falling was, at some points, like climbing down a waterfall. We were absolutely soaked through by the time we reached the bottom. It was then a long hard slog back up to Mikledore and then on up the ridge to the summit of Scafell Pike. Once again we found ourselves in the clag so quickly headed down the path to Lingmell Col and then down the path back to the car park. The last hour of the walk was in pouring rain and we were glad to get back in the car and start to dry out.

We had originally set out to do the route we did, plus Ill Crag, Broad Crag and Lingmell but the weather beat us on this occassion so we settled for these two and the great feeling of having climbed Lord's Rake.

We didn't get may pictures because of the rain and fog but here are the ones we managed to take... 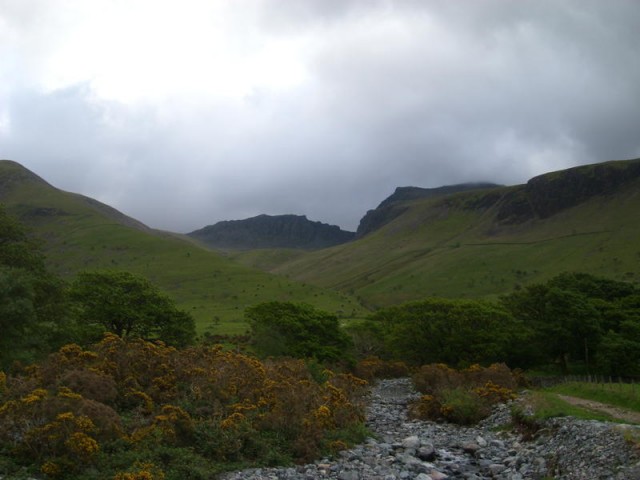 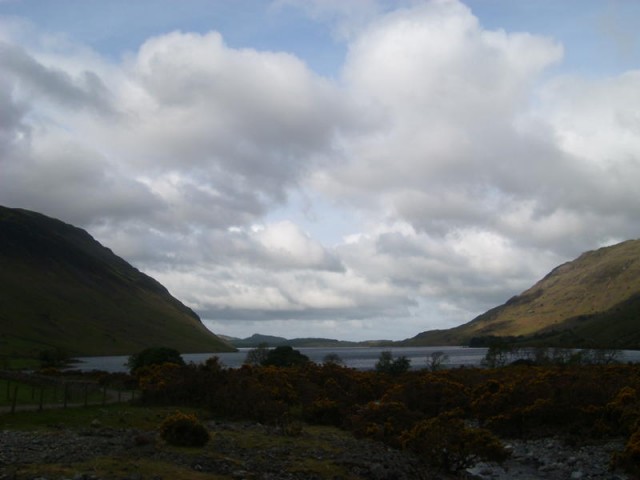 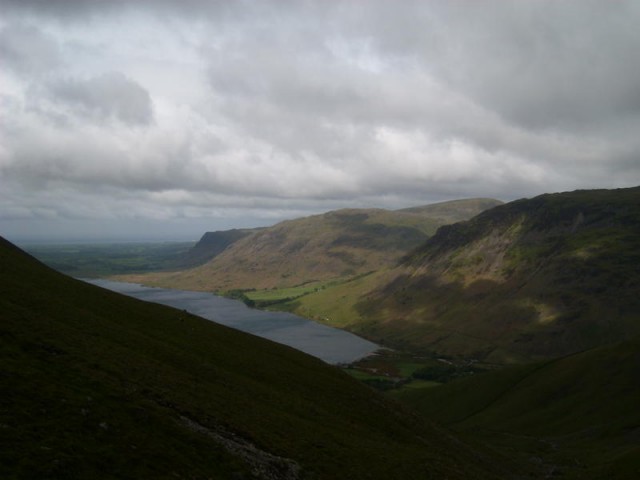 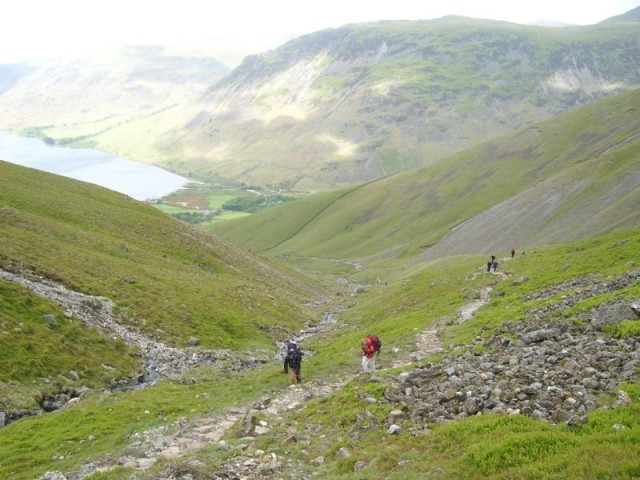 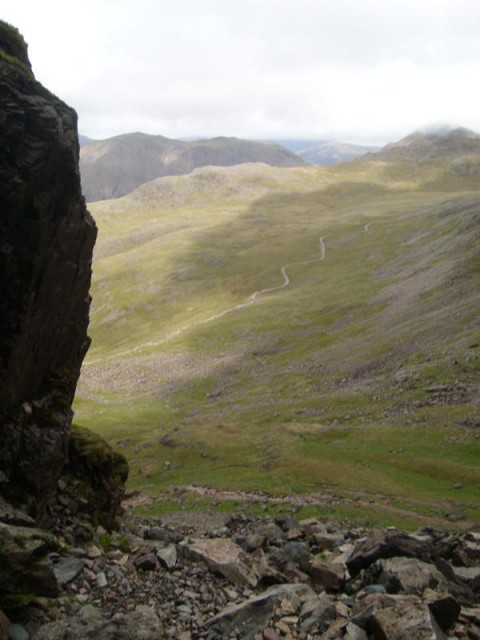 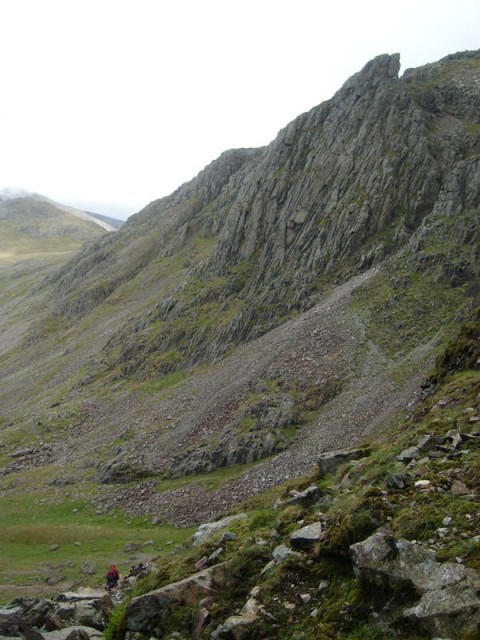 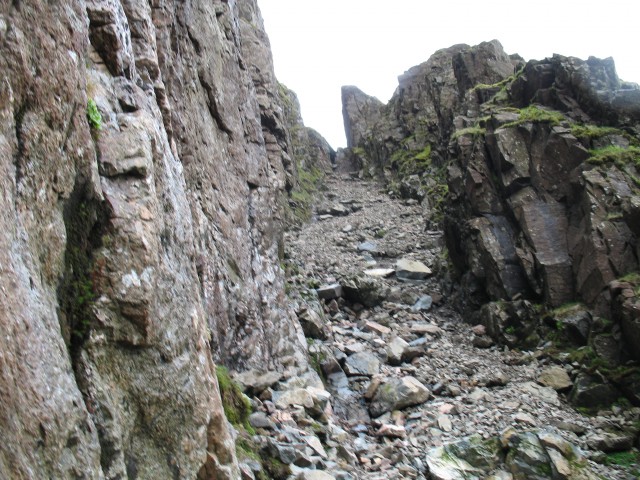 So the Rake was ok then. What a pity you never saw anything from the tops. Your pics seemed to show great promise on the ascent. Another excuse for a return visit.

I'm going back up Scafell Pike in the first weekend of June when doing the Three Peaks with my brother-in-law so will hopefully get better weather then. It started off being a nice day, as the pictures show, but it then turned quite nasty very quickly. I saw quite a few people up there with bare legs and not much clothing that must have been regretting believing it is nearly summer!

I can't wait to get back up there but will be going via Mikledore as we want a quick up and down. Fingers crossed for some nice blue skies and no hail storms

Well done Derek, the pics you got are great, you never trust the weather in the Lakes

susanmyatt wrote:Well done Derek, the pics you got are great, you never trust the weather in the Lakes

It very often starts off promising, turns to mush on attaining summits only to completely clear out twenty minutes after leaving said summit, leaving you thinking if only I'd held out a bit longer. How many times have we all seen that happen!

Like the photos. I must admit i've never been up that way due to extra distance to drive round, i usually head up langdale. My favourite spot is the boulder field round Broad crag especially if its thick mist

A group of us (7) are heading down there on Sat 4th but I believe we are coming in from Seasthwaite (Borrowdale) As none of us have done this one before It would be interesting to hear of others who have used this route.

I've done Scafell Pike from Seathwaite a few times now in prep for the 3 Peaks Challenge. It's pretty starightforward, long step path up to Esk Hause, then nice easy path for a bit, you can choose to go over or around Ill Cragg and then there's a big boulder field around Broad Cragg which is a little bit tricky, just take your time and avoid the wobbly ones

Then there's a dip and climb up to the summit of Scafell Pike which can be a little exposed in strong winds but nothing too scary. Haven't done Scafell yet but might return to tackle both from Wasdale as I've a score to settle!

Thanks for that BlakBrucker, I've seen this route on some websites already and another from Seathwaite via the 'corridor route' How long did it take car to car? we intend to be parked and setting off before 9am.

It'll take between 4 and 6 hours depending on how many stops you take, how much scenery you take in etc. If you're just racing up and down then 4 hours is do-able. I haven't done the corridor route myself but believe it's a quite a bit more challenging! You might find parking spaces limited by 9am at Seathwaite so be prepared to add another mile or so to your journey!

Have done the corridor route once. There are some steep bits in it and a few easy scrambles but nothing terribly difficult. If I were to do Sca Fell Pike again I'd probably go that way again, the views are fab.

Did the corridor route going up and came back via Broad Cragg. Glad we did it this way as I thought coming back was a bit easier apart from the boulder fields. Took about 7.5 hours but there were quite a few stops. Also met a lad on the way up who was doing it for the third time this week! He suggested that our route was the best way to do it.

When going from Seathwaite I've always done Grains Gill - Esk Hause - Calf Cove - then over the ridge to Scafell Pike and returning via the Corridor route. I know it's all down to personal preference but my reasons for doing it this way are that the walk up Grains gill is at a gentle gradient unlike the ascent to the 1000 ft stone. I treat Scafell Pike as merely a check point, touch the cairn have a quick look around then leave the often crowded summit and head for the peace and quiet of Lingmell and its fantastic views of Gable and Wasdale. . The view Northwards as you head towards styhead is superb. Styhead Tarn is a fantastic resting spot and a fitting finale to what is possibly the best day out in the lakes, before heading back to reality of everyday life. Oh and its Downhill all the way, the sharp descent and re ascent to Broad Crag after the summit could be quite a depressing sight.