We had planned to do the eastern side of Glenshee on the Saturday and then the 3 on the western side on the Sunday. We drove to Glenshee Friday night and pitched tent near the carpack at Creag Leacach & Meall Gorm, we woke to completely miserable weather, it was raining all through the night and very windy so we did a weather check and decided to switch plans and do the western 3 first. We headed out around 11.30am on the ascend up to Carn Aosda summit and reached the summit around 12.40 . This area is so scarred by mans touch, every where you look you see the damaged caused. We head off again to our 2nd Munro of the day Carn a' Geoidh, the weather started to get worse although it was already miserable. It was raining, sunny(for very short periods), hail stones, misty and windy and cold. We reached the summit of Carn a' Geoidh around 2.30pm had a wee break then headed over to The Cairnwell. The last time we tried to ascend this 1 was back in 09 and the wind was so strong that we could hardly walk and never reached the summit but headed back down due to safety. We reached the summit took a few pics and headed straight down towards the carpark as we were soaked through and cold. Next day we started on our hike of the eastern 6 Munros of Glenshee, we left the carpark area at base of Cairn an Tuirc around 8.30am and reached the summit around 9.45 , the weather was just as bad as the day before - cold, wet, dull and miserable. We had decided to do the 6 because this was our 3rd time in this area and both previous hikes were failures to reach summits due to severe weather conditions and we did'nt want to come back again. We headed over to Tolmount and arrived at the summit around 11.00am and crossed over to Tom Buidhe and reached it's summit around 12.00 . We did'nt get to many photo opportunities due to the weather and low cloud cover. We took a wee break here and then head over and up towards Cairn of Claise which was under cloud cover and so we were using a GPS unit and memorymaps quite a lot at this point . We reached Cairn of Claise summit around 1.00pm 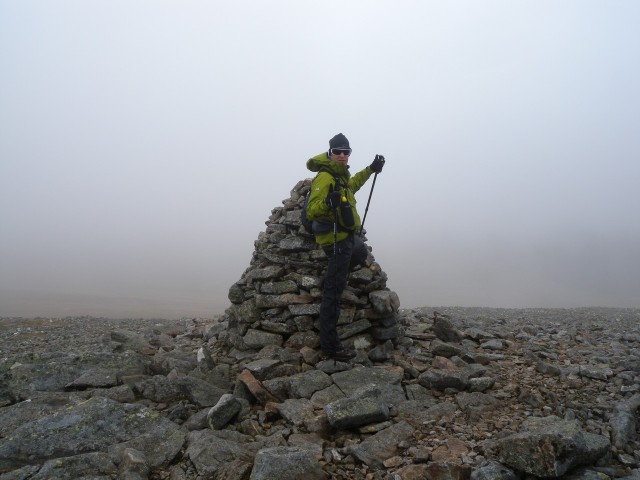 . We wish the weather had been kinder to us for photos. We set off towards Glas Maol again using the GPS unit due to poor visabilty because of low clouds/mist & rain. We took a lunch break at Glas Maol summit which we reached at 2.30pm then head for our last Munro of the day Creag Leacach, it's rather boulder on here and the rocks were a bit slippy due to all the water going around and for most of the time we were surrounded by clouds/mist . We reached the summit around 3.30pm and desend via the bealach between Creag Leacach and Meall Gorm and had the wonderfull walk back up the steep road and down to the carpark near Carn an Tuirc. The Cairnwell looks quite impressive from Meall Gorm. Although it was not such a good weekend for photos it was for us as we had completed the Glenshee nine. That's a great effort guys, well done for sticking with it irrespective of the weather. You got some great pics on day one

What's with 'Derek the destroyer' on the summit of Carn Aosda

or does he just like to carry big rocks about

Good effort guys. The weather has not been the best lately. Its a bit of a bleak flat landscape if the truth be told so not the most photogenic anyway. Well done

Great pity about the weather but well done all the same