So - here we go, my first report.
My first attempt at this hill was last October. That day I was with the family and it had snowed overnight, much to the excitement of all (little did we know then what lay ahead for the rest of the winter and how, if we ever saw snow again, it would be too soon!) We wandered along, enjoying the crisp, cold morning and spotting the deer - who seemed to be shouting "Here I am shoot me!" to any passing stalkers. The glen on a frosty morning in October

Anyway that day two youngest got so wet and cold from playing in the snow they were not up for it when it came to going up to the top so we went back to the car whilst husband and older son bagged the summit.
So here I was, back again 6 months later, alone and determined and enjoying the only day for weeks without gale force winds blowing across the tops. I parked the car and by 7.15am, banana in hand, I was off. 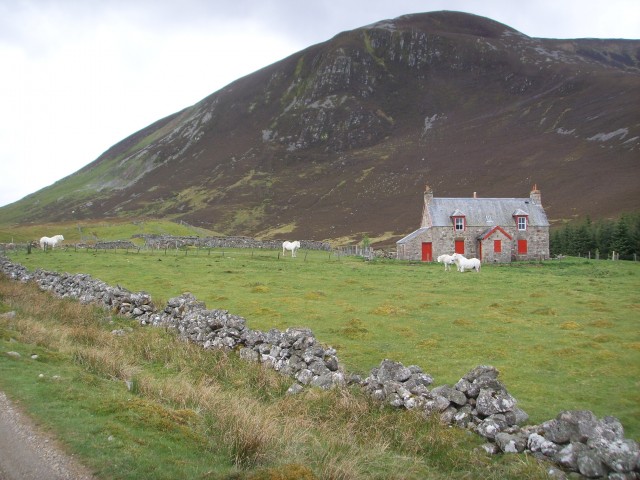 So, after taking some snaps of the abundance of wild pansies, I head off over the bridge and make good progress a long the track.
Last time we walked right along the track to approach the hill mid way, this time I decided on the route up starting by the Allt Coire Fhearnseag. The path was evident on both sides of the water, I went up the right bank for short way and crossed just in front of the small waterfall. Vetch (bitter vetch?) by the burn

I then followed the path up the heathery hill side to the monumental cairn. The path was easy to follow and altho quite wet in places, easily handled by short detours here and there, and I'm a bogophobic (a condition I developed from living near the Peak District whilst studying and hearing scare stories about what awful and certain death awaited you if you wandered off path on the peat hags of Kinder Scout....) 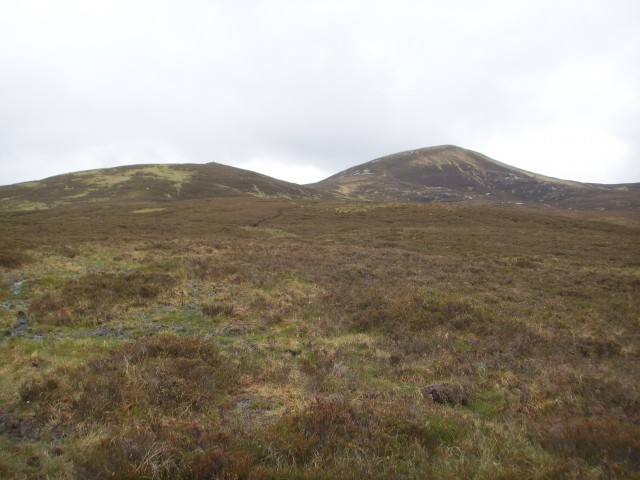 The view onwards and upwards The view back through the eyes of bog cotton. The cairn at last and the steep section in sight

The next section was a bit boggy and required a little more skirting around - those without bogophobic tendancies would probably just march on through - until the gradient steepened and the ground became rockier. At this point my phone reception returned for about 90 seconds! View west from the east top.

Before very long I was up in view of the east top with views widening in all directions. Unfortunately the cloud base was such that the higher hills to the north were covered, otherwise visibility was excellent, extending to the hills by Kinross.
The stroll along the summit ridge to the west top was fab. No one around just the views of the Glen Shee hills - i have climbed all these and great to see them from a different view - and good to get a closer view of the hills I have yet to attempt in the area. North from the summit Check out ChrisW's report for far better summit photos than mine!
It was now 9.30am - a bit early for lunch! - so I decided on tea and a scone in the shelter instead.
Bizarrely - despite gale force winds all week and some gusts whilst I was walking up - the top was very calm.
I walked back down the way I had come - the October experience suggested bog for part of the descent from the mid way along the ridge - and as the way up was so enjoyable why go another way! Paths down to the monumental cairn

By the way why is this hill so often described as pathless??? There are good paths all the way and sometimes too many to choose from! Closer inspection of the burn And back to the starting point

I was back at the car well before 12pm having only seen 4 other people - the joys of mid week walking.
I thoroughly enjoyed the walk - An Socach has a sense of such quiet remoteness and yet isn't at all difficult to reach.

Great first report mountain-ju-drop and some cracking pics - no need for people to go off looking at my summit shots but thanks for the thought. I think you selected the right route back, though I dislike taking the same route both ways the descent I made added nothing and actually took me away from the views earlier.

Isn't it great wandering around on that huge flat top when there are no other walkers about....as you rightly say - the joys of midweek walking

Its a well done all round,

Yes, Great pics and great walk. It sounds and looks nicer walking that way than the way I went but I did walk it in the snow

A very much under-rated hill, I think.

That's you off an running now....next time you go out you'll be starting to think too much about what you're going to say in your next report

Great report! I did the route staying on the track around to the South side and getting to the top half way along. Your route sounds much better.

mountain-ju-drop wrote:It was now 9.30am - a bit early for lunch!

Nah, never too early for lunch on the hill!

A fine debut report there. Welcome on board!

I really liked your report, I haven't done this one yet but I hope to soon!