I sought guidance on this route in January as my aim was to try 5 or 6 Glenshee Munros without resorrting to 2 cars, a bike, or walking 5k back up the A93. Thanks for the helpful advice back then, especially Sloosh. I also noticed 'ibush' did what looked like a similar route 3 weeks before me - so here's further verification of its feasibility.

I set off from an unmarked parking spot about 3k north of the Glenshee ski centre. The weather had been bad with poor visibility so I set off late - hoping for a predicted break in the cloud - and crossed the older of the 2 footbridges immediately E of the lay-by to follow a path E towards Carn a Tuirc. Carn a Tuirc from bridge

The path was clear but boggy and followed the burn for about 1.5k, then I took a left at a second set of old shielings to continue E up steepening slopes towards the summit. The path petered out as the ground became rockier so I swung NE for a spell to pick up another path to the top. I found it hard work but rewarding for the views across what at this point was like a plateau so I took my time to set the compass and navigate ESE then swinging ENE for Tolmount's grassy slopes - via the head of the impressive Coire Kander. The views from Tolmount are good, especially those to Loch Kander, Glen Callater and across to Carn Bannoch et al. 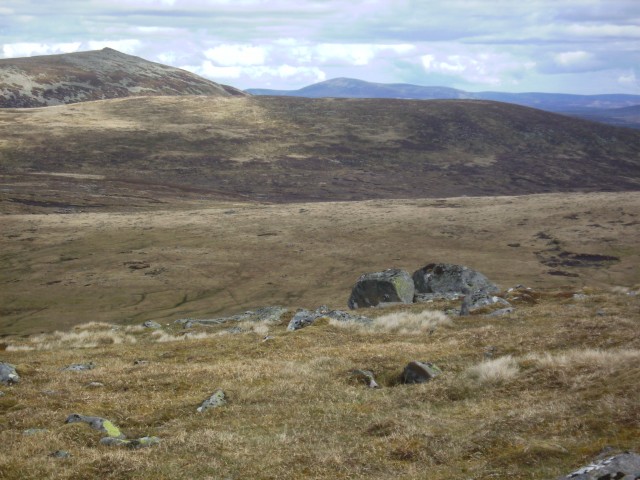 back to Carn a Tuirc from Tolmount

A decent path led me SW to to Ca Whims, then E to the smooth, but fiercely windy top of Tom Buidhe where I paused for coffee and a snack. There was little different to see than from Tolmount, so I quickly headed back W down to Ca Whims and continued along a line of old metal fence posts to the summit ridge of Carn of Claise. Tom Buidhe from Cairn of Claise

I'd have saved time to treverse SW as I approached the summit, as the path led me to the N end of the ridge and the cairn and shelters are at the S, but it was an enjoyable gentle stroll. Me atop Cairn of Claise

I then followed the path SW, with a wall to my right for a spell, before leaving the wall to join an obvious path heading towards the summit of Glas Maol, passing the imposing Caenlochan Glen - guarded stoically by Little Glas Maol. Despite the weather deteriorating there were still good views from the top of Glas Maol including Creag Leacach to the S, but my aged camera battery was fading fast so I had to leave a lot out. If I'd had time I'd have done the clearly accessible Creag Leacach, but its there to look forward to for another day.
I then retraced my steps to join a spur heading NW from a point midway between Glas Maol and Carn of Claise and follow its path towards the top of Sron na Gaoithe, where it skirts its NE flank to continue all the way back to the start point. I foolishly left the ridge to see some deer and the waterfalls in the Allt Coire Fionn but it was a long steep detour I wish I'd decided against! NB my map shows both options - please avoid my mistake.
I enjoyed the day and would happily recommend the route to anyone wanting a good walk which takes in 5 munros (with an option of sixth) without the need for 2 cars etc etc.

Thats a good looking route you have there,been looking to try and grab these 5/6 with the use of 1 car,will defo give this a go soon

Interesting route. Like you I didn't want to walk too much on the road but decided against taking the bike as there's a hill either way to the main car park. A few weeks ago I parked my car at the main Glenshee car park and walked down the hill to start at the same point you started at - it then allowed me to return more directly via Meall Odhar which suited my plans.

Once you're up Carn an Tuirc it's a relatively straightforward walk with long inclines but there are some nice views on a clear day.

ChrisW wrote:Great report JonetCol but has left me feeling a bit whimpish as I have been looking to do these 6 as 2 separate days (4 & 2) now I'm gonna look like a pussy

chris - one day's fine, the hardest bits are getting up Carn an Tuirc and the walk out to Creag Leacach but these aren't that bad - you could always have a go, see how you get on and cut back if you need to

Chris, agree with Rockhopper, but good luck whatever you choose - and best wishes for Canada.
Jon