finally climbed the long awaited glen shiel ridge on saturday, i no i say it every time but this was definetly my best walk yet and probably wont be beaten for a long time
This was planned in december for my father in laws 50th as he was dying to do this since we took up walking so i booked the cluanie inn for 2 nights, a great place to stay for hillwalkers especially for doing the ridge.i couldnt believe just how close the hills were to the hotel with my room probably having the best view i can remember from a hotel window we set off from the cluanie around 7:30am a bit later than planned but we did have more than a couple of pints 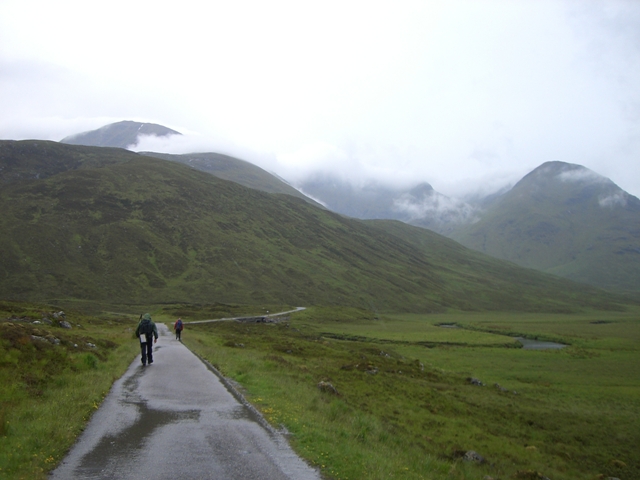 after the half hour walk round the stalkers path to the starting point on the hill the day was nearly finished as wullie (father in law) nursing a sore knee without letting on decided he didnt want to risk carrying on as he was in to much pain.couldnt believe it as this weekend was planned for him but he didnt want to waste our trip.after a 15 min stand off we decided to go for it less 1 walker.
the next 1 hour and a half was murder with the rain overnight making walking in this steep muddy path a nightmare,the worst part of the walk.with the cloud closing in and visibility down to 20 metres i have never been so relieved to see a cairn no stopping here so it was onto aonach air chrith for the 3rd and highest munro,a great walk to this but only wish i could see the views i had heard so much about 4 down 3 to go,the walking getting much better now as the blue skies getting the confidence going with great anticipation of getting to each summit before the clouds came back so quickly on to sgurr an doire leathain 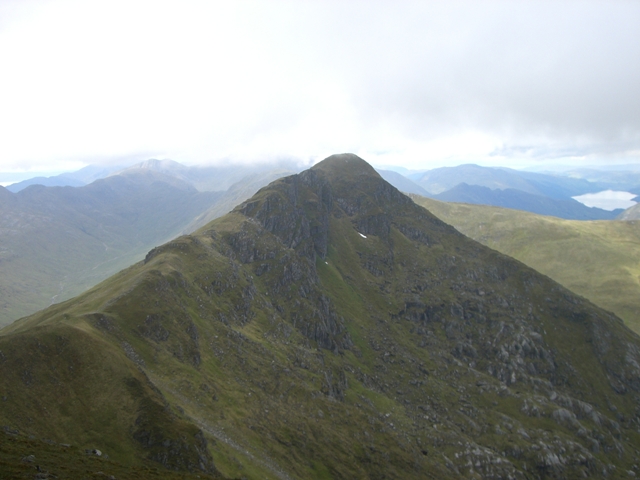 we had planned to have a good break here and take in the views and look back at what we had just done there was no time to hang around here so it was time to head off this excellent ridge.
on the advice of the owner of the cluanie we never descended by the way marked by the map to the car park at the battlesite but instead parked the car at the malagan car park further down the road to join the stalkers path.
feeling brave we chose a quicker route down the nw slopes following the am fas allt burn probably not the best idea as this was very steep and sore on the knees Glenshielridge.gpx Open full screen  NB: Walkhighlands is not responsible for the accuracy of gpx files in users posts Looks like you had better weather than we had when I did last August - rain from the start until Creag a'Mhaim and then low cloud and rain from Aonach air Chrith!

That last photo, "more views of 5 sisters 2.JPG" isn't the Five Sisters - it's looking towards the ridge that continues east from Sgurr na Ciste Dubh (the last of the Sisters). It looks like Beinn Odhar through to Saileag and Sgurr a Bhealach Dheirg. Suspect your other photos described as the Five Sisters show Saileag and Sgurr a Bhealach Dheirg as well.

Great report - it's some walk isn't it. Weather looks not cad for the NW.

alan sherry wrote:the next 1 hour and a half was murder with the rain overnight making walking in this steep muddy path a nightmare,the worst part of the walk.with the cloud closing in and visibility down to 20 metres i have never been so relieved to see a cairn

Did you use the stalkers path on the SE aspect of Creag a Mhaim - it seemed pretty well built for the most part.

Alan Sherry wrote:the walk from sgurr an lochain to creag nan damh was better than i expected as i thought by this point we would have been completly knackered but the legs kept going and there was even the mention of adding the saddle and sgurr na sgine to the walk

Always looks easier on the map doesn't it

Alan Sherry wrote:after an hour and a half of constant pressure on the knees by following this burn i was so relieved by seeing the road and even better when i seen the car

thanks for pointing that out macCookie

that's why i apologised at the start of my report i knew i would get something wrong, ive noticed a few more mistakes as well but its a lot harder when you get back and look at your pics especially as it was 7 munros and with hardly any views its hard to tell whats what when your not familiar with the area


thanks for the comments kinley

i followed the path marked on this site by following the road round over a stone bridge to a stile and headed straight up the steep slopes,marked drochaid an uillt ghiubhais on the map.i did see other walkers following the road right round but thought this way would be quicker

only had 1 car,the cluanie charge £9 to drop the car off the night before and bring you back to the hotel
but as wullie returned early he was fortunate to get a lift back to the layby by a nice lady who was dropping her husband off at the end of the road to cluanie lodge to start the ridge (cheaters

thanks cj,glad you enjoyed it

If I pull my finger out I could show you the views you missed on the first part of this walk as we did the eastern four last month in good weather. We had a fantastic day - it really is a terrific walk and I had been eager to write a report but wanted to write the previous weeks report first... just haven't got around to this one yet.

Well done in doing the seven. Four was enough for me, especially with a hike back along the road to the start.

thanks can of airy
that would be great if you could show pics from the start, i can see what i missed
its a pity you never done the whole ridge especially seen as you walked back the distance up the road