With a small weather window I hit the trail at 8.30am from the Grey Mare's car park. It was dry! Rain coming in at lunch time, but was it an early or late lunch?

The track out of the woods is woeful and a testament to what the combination of neglect, water and trail bikes can do. It improves after 2km but is not a patch on the well made stalkers track that I took up Sgorr Eilde Beag. This section almost made up for the yob/yobbess who had peeled an orange on the main path for about 1/4 mile discarding bright orange bits all over, and then to top it all, twice spat out the inedible pith. Fortunately I was walking with my poles and used the points to pick the litter up, but I couldn't get over the attitude.

Anyway, back to the fun. I had tried to combine Sgurr Eilde Mor, Binnein Beag and Binnein Mor earlier in the year but pulled off the last hill due to poor weather. I had always reckoned the way I went today, branching left off the path before it reached the Lochan, was going to be better route and it turned out to be a peach. Once on the broad ridge to the subsidiary tops it was an easy stroll to the top of the Mor.

Also seen the now customary pair of ptarmigan, but unable to retrieve the new camera in time. I've taken some panoramic photos with it and will try and upload these. And by the way the rain turned up for an early lunch! Back to Loch Leven 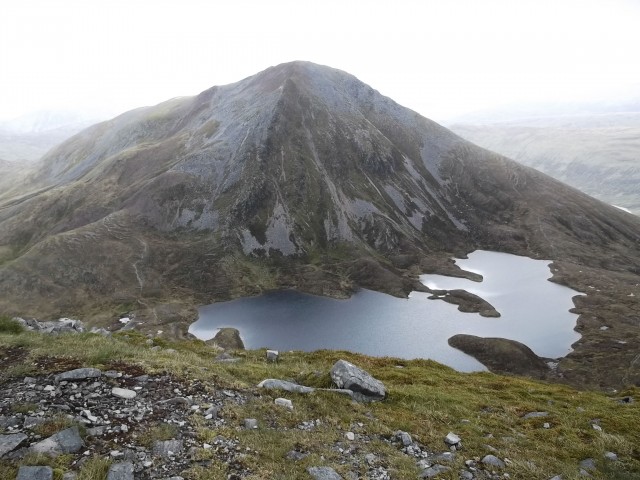 Some great pics there blanchie - you did well to see anything this week. Love the panorama and the last shot, beauties

Well done on your walk

Its amazing what a good, not expensive camera can do. I should have ditched my phone camera (a Blackberry) some time ago as I have stacks of fairly average photos from it. The Fuji's panoramic stitching is a joy to work and its got a great management tool on the computer which plays them back as if you are rotating your head!