Change of plan from Goatfell to 2 Munros in Perthshire

Change of plan from Goatfell to 2 Munros in Perthshire


Last minute change of plan,,strong winds this week meant ferry services were a bit unreliable so our intended trip to Arran to bag Goatfell, was changed to this smashing duo in Perthshire.

On reading up on Lawers the night before, realised this would be my highest Munro to date, being 10th in the 'list'.

Obviously the initial climb up off the lochside road to the car park takes you up about 2-300mtrs I think so your not taking in the entire 1214mtrs,,but still,,,is a big chunk of rock!

Margaret and I headed off about 10:30am with the intention being to take our time,,take in the views,,,weather holding so far,,if a bit windy. Car park was busy and several pairs and small groups heading off around the same time.

After clearing the fenced area, which was a lovely mix of various trees and shrubs with the burn running down through it. Very colourful and varied. Must look up the reasons for the fencing and what exactly is being protected from the ravages of Bambi.

Shortly after clearing the reserve, the path forks and the left hand branch looked like our intended return route, one or two people behind us chose this route,, but on returning this way,,its a tad closed in and to be honest, a bit of a nothing walk. Nothing to see and no real challenges. Gladly,,we took the right fork and headed off up Beinn Ghlas. The top is reached a lot quicker than you might expect. (Id previously read about someone doing this doubler in 4 hrs and thought they must have been mad,,including our lunch stop and several short stops, we still got up and down in 4.5hrs)

The view of Lawers is fantastic from the top here,,no real cairn, just a plateau and a small pile of stones. Me and Ben Lawers from the top of Ghlas

We then dropped down off the top to the bealach, the return path to the left was visible just as the ground rises on to Lawers. Passed several pairs coming down from the top. The wind by this time was whipping round from the north and a bit chilly. 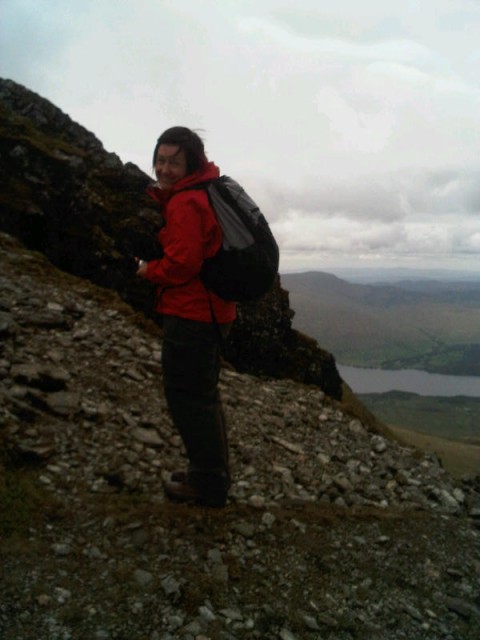 Saw one or two very small patches of snow on surrounding hils and a puddle of slush on our path,,then we saw it...SNOW,,,FALLING FROM THE SKY. 27th May, SNOWING. Very small flakes but came thick and fast and the wind whipped it up in all directions. The ground under foot had been pretty good up most of the route, although some of the maintained path, although substantial, was quite difficult to walk on, but by the last 1-200 feet from the summit,,the natural rock formation was long, deep, angular sections and pretty tricky to get over,,especially with the snow blindness setting in.

Reached the double cairned top , time for a few pics before hunkering down on one of the north facing paths to shelter a bit,,still cold though. Taken about 2 hrs to this point. Didnt hang around much after taking on some food and drink, just too windy and cold. Wind, snow, smiles and a 10 second dash from the camera to the pic!

Climbed back up to the older stone cairn and nearly got blown back down again. The descent back down the grey slidy, long rocks was completed mainly due to luck,,couldnt see a thing but got there and met a couple of guys heading up the way, stopped for a natter before setting off again.

Down into the bealach and sharp right on to the return circular. As I said earlier,,this is a nice path for a walk, but nothing more,,the view closes in and other than the valley bottom and river,,there isnt much to see. Pretty quick progress then you round Beinn Ghlas from the north and Loch Tay comes back into view. The snow was still coming down but was turning to rain, so full waterproofs required by now.

Pretty uneventful drop back down to the reserve, car park was still pretty busy,,only 3pm afterall.

Back to Killin and a pint at the Falls of Dochart, log fire burning and tourists wandering around the bridge snapping like snappy things. Now thats what I call cosy

Fantastic day, bit shorter than either of us had thought, think we must be getting good at this hill climbing lark.

Considering the size of these hills,,we both agreed it was a much easier and shorter day than our trip 2 weeks ago to Ledi and Vane which was a bit more demanding in our opinion.

Anyway, thoroughly enjoyed ourselves, great way to spend a day off work. Arran will need to wait for another day.

Well done, that snow eh this weather lark is a pain at times but job done congrats

Aye,,,we had 3 seasons today,,,and none of those could be classed as Summer

lol,,,Still,,adds to the experience. cheers, G

Well done on getting those two done. My son and I did the exact same route a few weeks ago.

Well done, I really liked these two,
although when we done them we were surrounded in mist so could not see a thing,
ejoyed your report and photo's.

hey,congrat`s,you got the summit the way i wanted it and you got a real pub