Due to the weather reports changing for the better I scrapped my plans to do Ben Vane solo to doing Cruach Ardain & Beinn Tulaichaen with friends. After reading several reports and looking up some books I decided to give myself a challenge and tackle this from the Crianlarich side.

I parked in the large layby on the A82 and we set off near to 11am. You cross over the sty and cross over an incredibly boggy field and head under the small railway bridge. After this there is a good track to follow over a bridge. You follow this track until you see a second ( very dodgy ) bridge. You take a left from the track over the bridge and follow the tree line up. This section was really boggy and at times almost over the gaitors !! After the boggy section it was a steep wee climb up the first little hill, I think its called Grey Heights. Once you get to the top its a good walk to a second small hill called Meall Dhamn. There is a clear path to follow now. On approaching the second hill Cruach Ardain comes into view for the first time. Ben More and Stob Binnein poke their heads into view

You now follow a good path towards Cruach Ardain. The path seemed to go up then down etc It was hard going but we were getting nearer. The views were getting good to ! First look at Beinn Tulaichean on the way to Cruach Ardains summit. 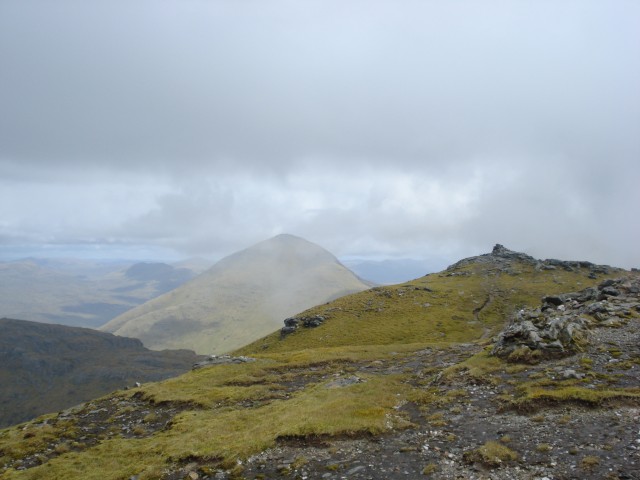 Cruach Ardains summit with Ben More in the background.

After much discussion we decided to head on and do Beinn Tulaichean ! On route you get great views of Ben More and Stob Binnein We were then on the summit of Beinn Tulaichean Cairn on the summit of Beinn Tulaichean

It was then a very long walk back to the car. Areal leg burner today and leaves me one short of getting to double figures !!!

Ment to say, I used viewranger for the first time today for the route and it was brill.

Nice one Del. Done this about a month ago in much better weather and it was a great walk. That bridge looks like its sustained some storm damage from last week as it wasn't looking quite as dodgy when I crossed it. I used the route posted on here by Stretch and traversed back around the side of Cruach Ardrain on the return after coming down Beinn Tulaichaen. Reckon it saved me about 30 mins and a steep climb back up cruach Ardrain. Did you do the same?

Thanks for the replies. Unfortunately not. I went back up Cruach Ardrain. It was that section that burnt my legs out !

Good stuff Del, glad the Viewranger software worked out for you. Skirting around Cruach Ardain after doing Beinn Tulaichaen would have saved your legs a bit, sadly when I did it there was deep snow on that side and it was tough, even with my long legs.

Thanks Stretch. Now I just need to decide what hill will take me into double figures !!!

Great effort Del - just a step away from double figures now, and in no time at all

Cheers Chris. You have not done to bad either !!

Like you I also went from the A82 side - seemed to make sense and was easier to get to ! Double figures next then

Nice report of a good route. I seem to remember it was tougher than I had expected when I did it last. At least the weather seems to be improving at long last

Nice report del, brings back some memories. Did these on a very hot day and found the trek up Ardain hard going, seemed to go on forever.

Cheers guys. I really enjoyed the route and it was a great day out. It was the return up Ardrain from the second Munro that got my legs. Enjoyed it far more than doing one hill. Felt that I had a good work out !!