The report is edited from my geocaching blog http://mrsbiffo.blogspot.com/2011/06/losing-mrbiff-up-ben-lomond-and.html

The hottest day of the year so far; EH NAW! That day has gone ........ it was yesterday. If you're not fast in Scotland, CARPE DIEM! Seize the day and all that, well if you don't, you've had it. So the weather had judged us as a nation, we hadn't appreciated the sunshine the day before so we were punished with cloud. Cloud and hill fog. As we arrived at the start of the path to Ben Lomond I questioned whether 'hill fog' was merely another way of saying 'swarm of hungry midgies', oh these guys are really vicious! Perhaps they are on some kind of commission from the tourist board:

Well we didn't hang around to be midge breakfast and made haste through the woodland track to escape the blood sucking armies. "http://www.incallander.co.uk/music/the%20midge.wav">Please Enjoy The Midgie Song! 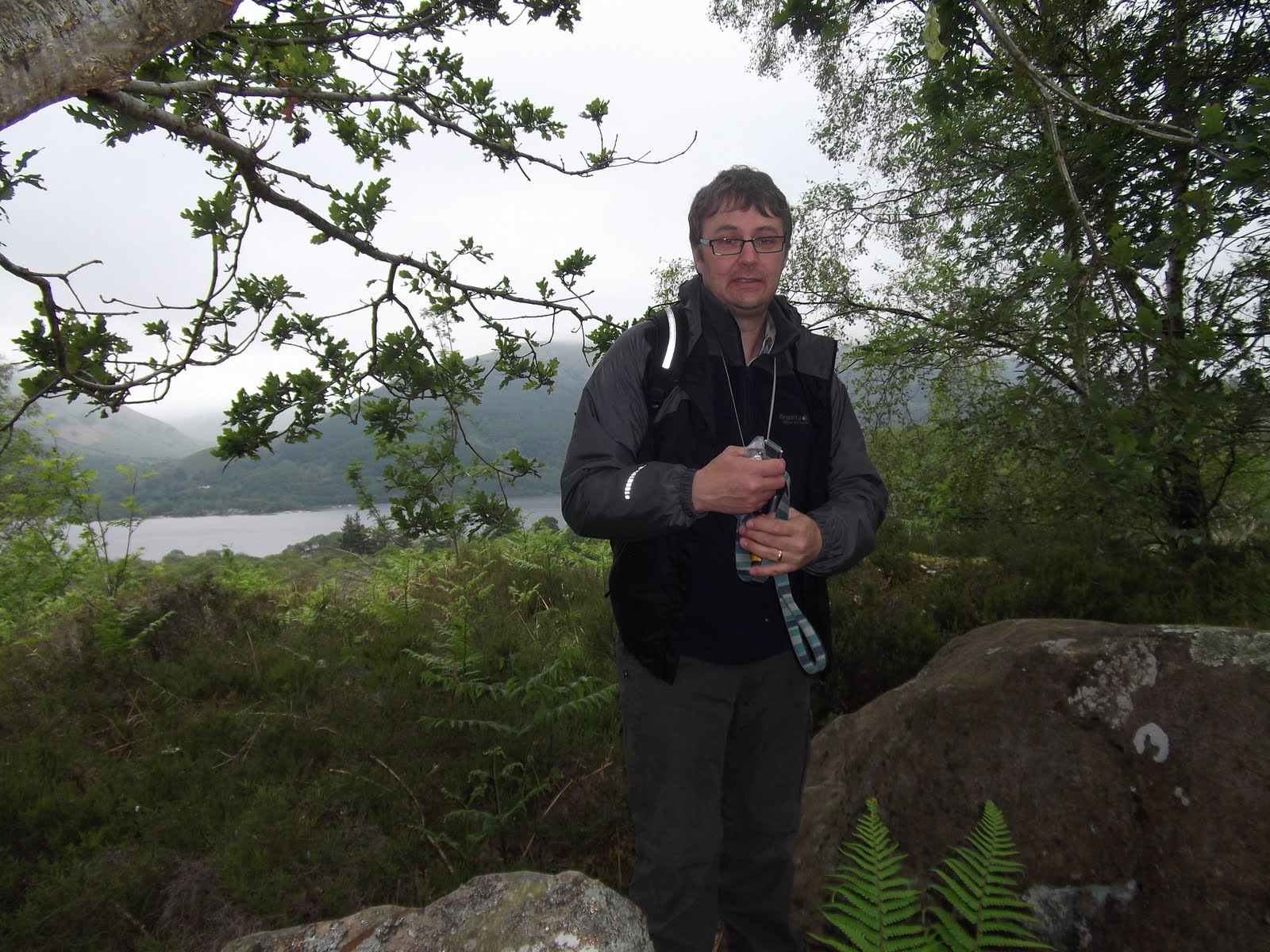 Does a Bear Cache in the Woods? No but Mr.Biff does.

The first cache on the track we left till the way back down because of the midges, yes seriously that bad! So our first cache find of the day was Does a Bear Cache In The Woods? we found this cache really easily and it gave us an excuse to stop and take some layers off.

So off we trotted huffing and puffing as we do on the first steep rises, our mate Dotscot has explained this in 'medical terminology' that seems very feasible when she explains it but it is far too complicated for me to try to on here...so ask her! Anyway I huff and puff because my body should (thanks for making me feel better Dotscot and not just a right unfitty!).

We thought Ben Nevis was busy, well Ben Lomond holds it's own for popularity! Lots of people and doggies. Now there are two downsides to this.

1) Drummer wants to play with them ALL...and they don't want to play with him, they are clearly professional mountain walking dogs and have no time for a girlie looking dog bouncing about them and trying to sniff...well y'know.....

2) As much as Drummer loves other dogs, Hannah hates their owners and howls like the Hound of the Baskervilles when anyone is within five feet of her. This is embarrassing, especially since people think they are beautiful dogs and exclaim so, only to have Hannah howl like a rabid wolf. It needs to stop or she's getting a muzzle... but that makes me think of Lady and the Tramp and I couldn't make my Lady sad. 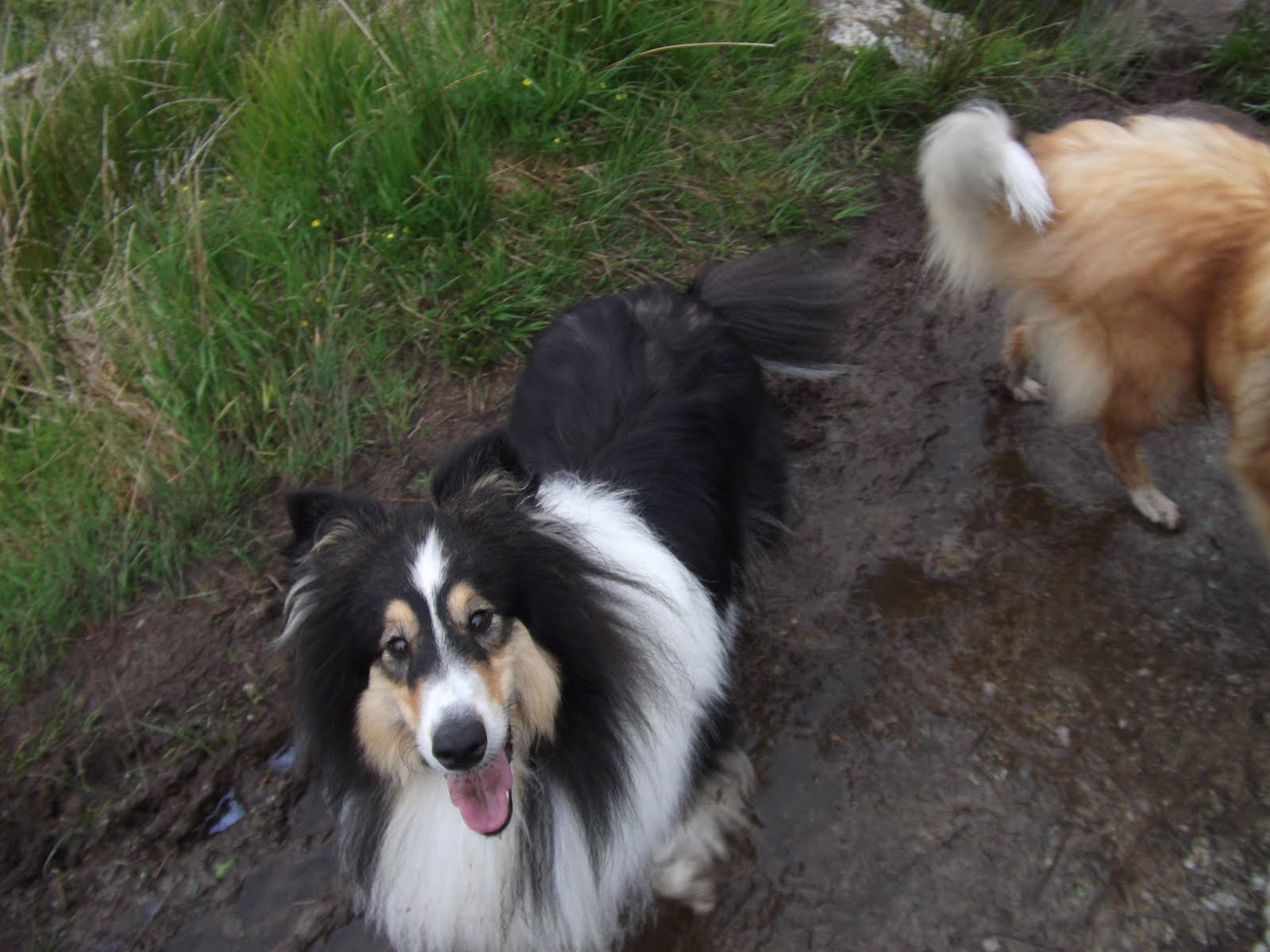 Hannah - Hound of the Baskervilles

The day is overcast but dry. 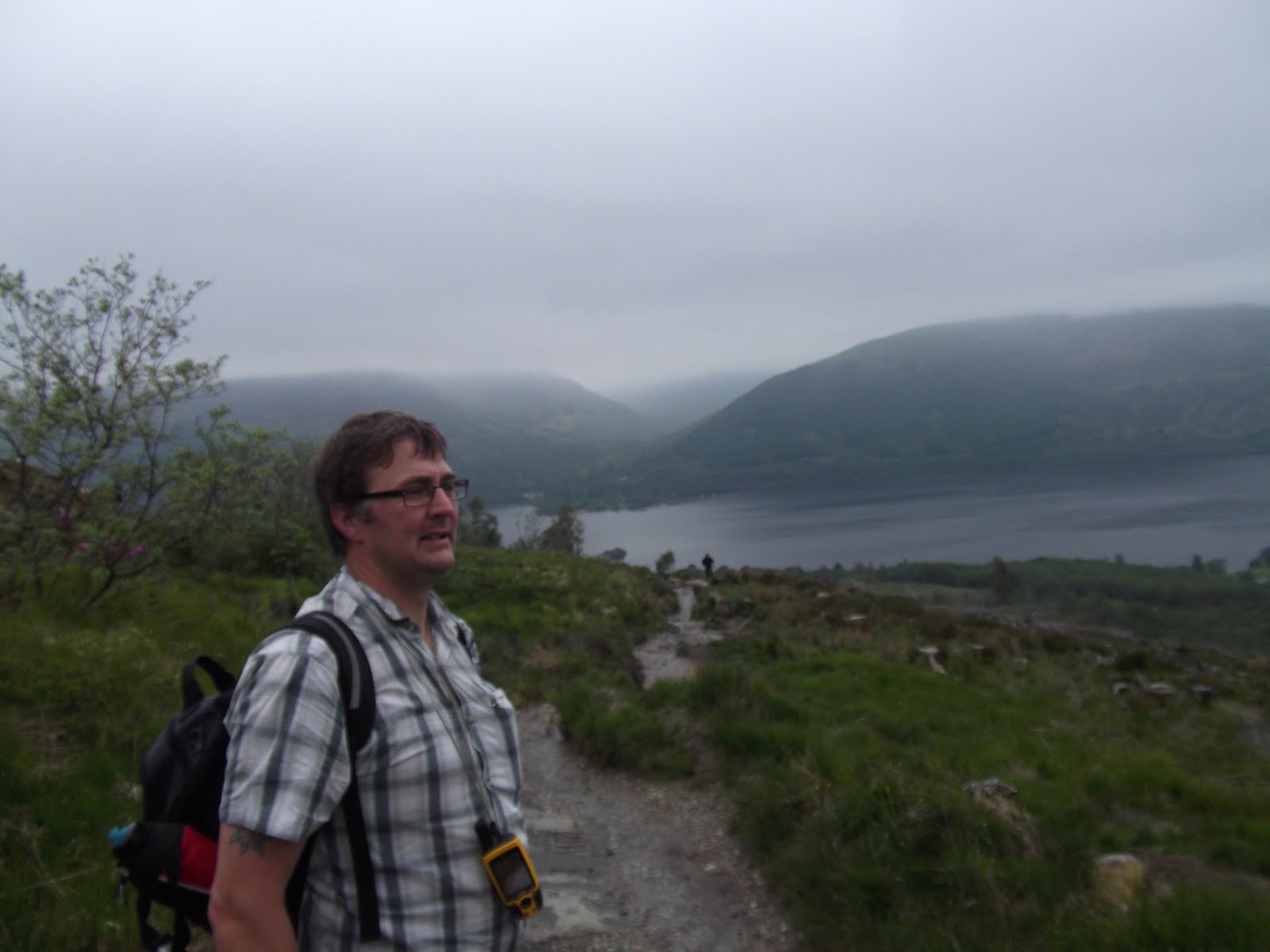 We can see that the hill fog is obscuring the mountain peaks all around, 'obscured by clouds' mmmm wonder if Pink Floyd climbed Munros. Well apparently not:

The 7th album was created as a sound track to the French film La Vallee by Barbet Schroeder.'

There you go, a little piece of trivia for the pub quiz. Don't say this blog isn't educational! Onwards and upwards we pass the little Ben Lomond sign, well with us you never can tell that we are actually on the right mountain. 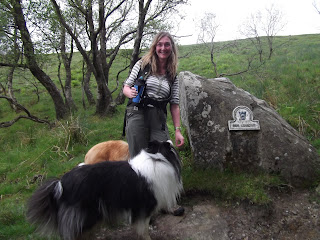 The going is good and we are really enjoying our walk we know that the next cache is just up ahead on an S shape bend in the path. The problem is, there are lots of muggles (non geocachers) and there is a bit of a hold up. The reason for this hold up is quite incredible. Slowly, step by painstaking step, an elderly, blind man is being guided up the mountain by three women who are describing each rocky step he is taking. I felt a real surge of warmth for this strange party of four and commend their patience and resilience. We met the party on the way back down the mountain still on their arduous journey. What an amazing challenge I thought to myself only to have Mr.Biff suggest that they should just say they've arrived as he'd 'never know the difference'. I was shocked beyond belief at this statement and Mr Biff got a slap for the suggestion. He is a practical man of solutions, what can I say....... 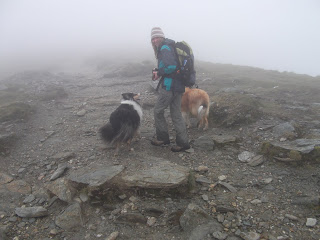 It wasn't long before we lost the green and headed into the grey. Lots of grey; grey path, grey air, grey view....GREY.

Still we were very upbeat and really enjoying our walk, our clothing and doggies were getting damper by the minute but our spirits weren't. We'd been itching to get out and do a proper good hike since we climbed Ben Nevis back in April. The weather had just been so dire, and children so demanding with their activities that we'd been grounded so we were really enjoying the freedom.

After two hours we were nearing the summit and it became much wilder, windy and very cold. Cursing myself for forgetting my gloves and pitying the folks in shorts with red, skelpit legs and yes the wee teenage girls in t-shirts and dolly shoes. I have a theory that while we are bagging in the name of the great Sir Hugh T. Munro, they are tottering in the name of the late Marilyn Monroe.

Drummer got a bit of a scare at this point, there are a few bigger rocks that require a bit of clambering, with the howling wind and the scary visions of people coming out of the mist he was for none of it and decided it was time he left the mountain. So my headstrong boy turned tail and legged it back the way he'd came with Mr.Biff bolting after him. As I stood in the fog with Hannah crying by my side minutes later Mr.Biff appeared with Drummer under his arm. I really wish I had a picture of this as it was very funny....Drummer, although he thinks he is, is not a Chihuahua! Time to pop both dogs on leads and rapidly get to the top so we could get back down again....why do we do this again? 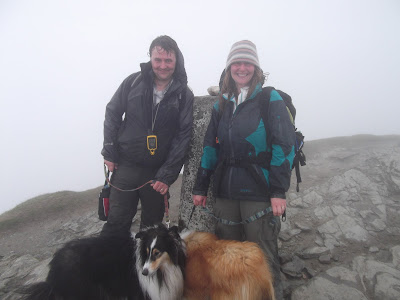 Now the plan is always to find some caches out on our walks, but for me climbing a mountain is about climbing a mountain, it is not about seeking tupperware. The cache is just the bonus. Now, this is not the case for Mr.Biff, for him if he hasn't written his name in a log book well his day is incomplete, his mountain not truly bagged. His has to be bagged and signed and bloody gift wrapped. I swear because at this point we are being blown about, visibility is pants, the dogs are unhappy with the sound of the wind in their wee ears when Mr.Biff says 'only 300ft! Be back in five' and disappears out of view to what appears to be a sheer drop from the mountain.

I then stand with two very upset hounds, who, as Collies, need to keep the pack together and want to herd their dad back to the pack and down the mountain. Now I'm with the dogs on this but cannot let them go, for obvious reasons. Lots of people that we'd passed on the way up walking past my now giving me funny looks.

'Ha!' I laugh 'Oops, lost my husband' a foolish thing to say I know, an over zealous boy scout may have sent up a flare at this point and we'd have been on the next viewing of 'Highland Emergency'. It seemed like an eternity but it must have just been minutes when he appears out of the swirling mist, making me think of myself as Sigourney Weaver in Gorillas in the Mist ( well with less googily eyes). To say Mr.Biff got an ear bashing is an understatement, however to have our first argument at 3196ft is a first. Mr.Biff is happy he has found and claimed the cache.

Now for the descent, the plan was the Ptarmigan route, but given the visibility and having read previously that it was steeper we felt for the dog's sake that it was best to retrace our steps. Funny how you can practically skip down a mountain when you have struggled up it! We made really good time and managed to collect the cache we'd had to pass on, on the way up thanks to Paul and Yvonne (tonic &amp; gin, strange name for kids) for the co-ordinates on this one as they were well out. The cache was soaked through and it appears no-one is maintaining it. 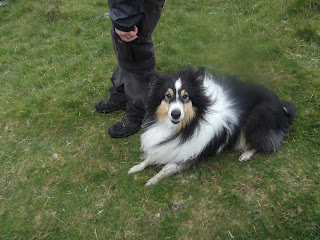 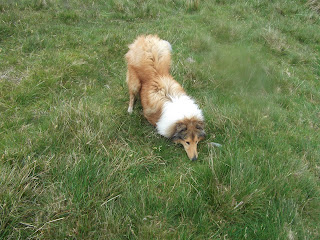 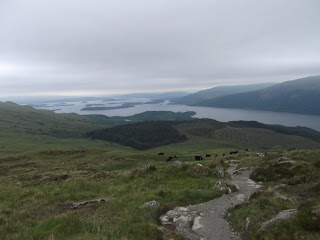 Finally we break free of the hill fog and we can see the loch and it's many little islands in the distance. The black shapes are a herd of Highland Coos with calves, this gives Mr.Biff tremors as he has a Coo phobia. 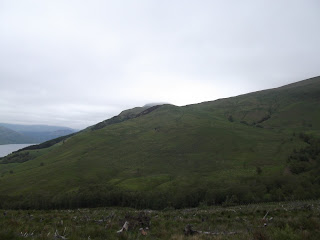 Ben Lomond obscured by cloud in the distance.

We are practically back at the car when Mr.Biff picks up the cache at the beginning of the track, the midges are still in feeding frenzy so we do this one speedily and then back to the car. 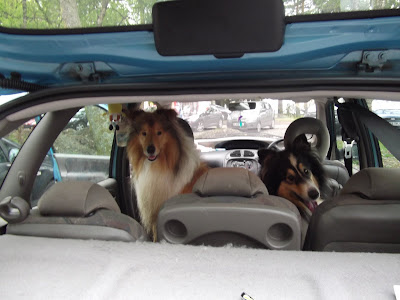 Earlier I said quite flippantly 'why do we do this?.....' Well we do it because we love it, it makes us feel vital in our bodies and more alive than we do at any other given time. It clears our head and allows us to think with clarity. Stress is removed and in its place peace reigns. That is why we do it........that and getting away from the kids for a few hours. Ben Lomond despite the lack of a view was a super hike that we enjoyed very much and we hope to do it again some day with clearer skies.

Great report Mrs Biffo. Funniest one I've read in a while, such a shame you didn't get the views you wanted.

Glad you liked it! We still really enjoyed it, and there will be other days and hopefully other Munros for views

Here's a wee picture from the day after yours

This was a charity walk with some work colleagues, with very similar weather

Dogs rolling in unmentionables and a sheep chasing a collie

The Ptarmigan wasn't to bad for our descent as the weather improved a little. Didn't matter though still very enjoyable if a little 'fragrant' on the way home

Totally agree, it's all about the walk! Love your dogs and their doggie 'rucksacks'. We'll definitely aim for Ptarmigan descent next time. Hope you raised lots for your charity. We did Ben Nevis in April for Erskine Hospital, felt really worthwhile. Happy hiking!