The mountain weather forecast was not great (in fact it was pretty grim with 75 mph wind gusts and snow/hail/rain), but after a 10 hour drive to Glen Affric the day before, I was committed to at least giving it a go. So it was with some trepidation that I settled for the 2 'easier' Affric Munros, Tom a' Choinich and Toll Creagach. The idea was to see how it goes and turn back if in any doubt

To minimise the impact of the westerly wind, I opted to head up towards the Allt Toll Easa and the Bealach Toll Easa. Assessing the conditions at this point, I could then either opt out completely, or climb the smaller peak (Toll Creagach) which is a more rounded hill with less chance of falling off it in the wind. This should be straightforward as the wind should power me up! Tom a'Choinich on the walk in

The path up the glen was more of a stream and I could feel the power of the wind already - what would it be like on the tops? 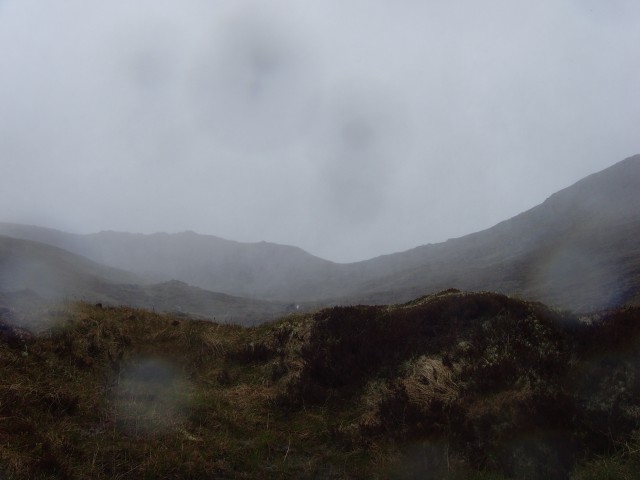 On popping up at the bealach, the wind nearly knocked my head off and it was alternating between snowing and firing bullets of hail! Also, assessing what to do next would not involve consulting the map as this would not be possible in these conditions

(although I did manage a quick glimpse in the shelter of some boulders further up the ridge). It was a good job I had read the route descriptions on WH so many times that I could remember much of it anyway

Tom a' Choinich kept coming intermittently into view through the cloud/mist and looked quite steep and intimidating in these conditions. Just as I had more or less decided on abandoning this peak, 2 guys emerged from the mist having just come over Toll Creagach. After passing (shouting

) pleasantries and discussing the conditions, we agreed to attempt the ridge ascent to Tom a' Choinich and 'see how it goes'. The ridge to Tom a'Choinich

This was a testing walk which turned into an all fours crawl at stages! The last 100m or so was through several inches of fresh snow which would make coming back down a bit more tricky. It was slow progress but eventually we reached the summit with a mad dash over the last 20m between the gusts.

No chance of photos or summit poses, just 3 men cowering behind a small pile of stones. We waited for gap in the wind and then made a crawl for it with some interspersed bum sliding on the snow - effective but not very elegant.

On reaching the bealach again we bade our farewells as the 2 guys had already done the other peak. They assured me that I would have no problems as I set off. In fact the only problem I had was trying to stop myself from running pushed along by the strong wind. Talk about power walking, this was taking it to the extreme with the top reached in only a few minutes

Managed a couple of photos at this point but couldn't keep the camera lens clear of the wet stuff. 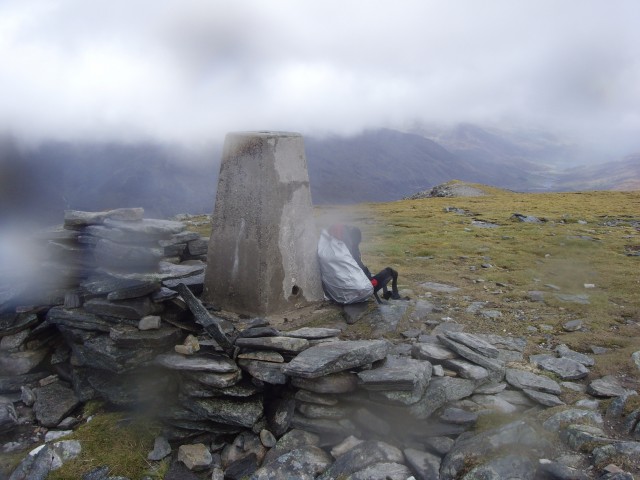 The route down was quick on easy slopes. At this point i was walking through anything in my way as my boots and feet were completely soaked. I must have used the wind to good effect as I caught up with the other 2 guys when I rejoined the main path further down. By this time the sun had also made a few brief appearances

to complete the 4 seasons weather.

). Also, thanks to the 2 guys I met on this route as I think I would have opted out without some moral support.

Re: 4 Seasons in Glen Affric

Re: 4 Seasons in Glen Affric

cheers rockhopper - was up there all week and the weather did improve later (though still very breezy). In fact would you believe got sunburn on Thurs/Fri doing some of the other hills in this area