A Big Day From Dalwhinnie

A Big Day From Dalwhinnie

With having booked up to go to Mull this weekend coming to do my 100th Munro,i had left 2 walking days to bag 6 summits,the previous week i chose to complete the Black Mounth hills which left me searching for a route to take in 4 Munro's.It was either going to be The Grey Corries adding in Stob Ban or i could visit the Alder area and bag 4 there........but after researching the route i realised that the day in total would amount to 50km

was this possible? i am by no means the fittest hillwalker around and had reservations about taking on so much in one day,would i be able to finish the route? what were my options if i couldnt? i thought it over for a few days with the plan being-

With these times in mind i decided to set off at 4:30am and after a coffee and some cereal i was on my way.The drive to Dalwhinnie was great as the roads were so quiet and i made good time arriving at the train station at 7am,got all my gear ready and set off on my bike to head for Culra.The cycle in was pleasant although i was starting to struggle with some of the uphill bits and the previous days worries were coming back to mind about my level of fitness but i struggled on telling myself it was due to the fact it was still so early in the day. 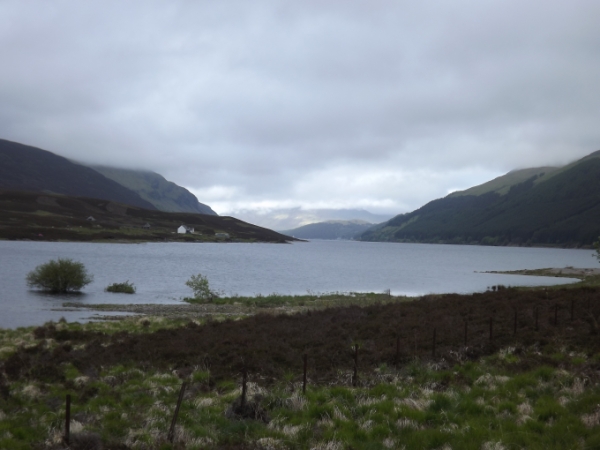 the view along Loch Etricht 
I arrived at the gate at Alder Lodge and after passing through cycled up the track and round the corner to be welcomed of the sight of Culra bothy which still seemed miles away but on i went and cut off the main path to head for the bothy.A short time later i arrived at the bothy and decided to take a ten minute break before setting off up the hillside to the first munro of the day Carn Dearg. looking down to the bothy on the initial ascent

The going was pretty tough especially after the bike ride in but i eventually got up to speed and after an hour and a half reached the cloud covered summit of Carn Dearg,a quick photo and a snack was had before setting off for Geal Charn. the lochan at Geal Charn the steep pull up to Geal Charn

but around about an hour from leaving Carn Dearg i arrived at the second summit,Geal Charn. Again a quick pic was taken as i set off for Aonach Beag,with the cloud being low i had no idea how close Aonach Beag was and duly arrived on the third summit after only 25 mins where i had my well deserved lunch and got another summit pic. At this point i was very happy with the progress i had made and the legs were feeling suprisingly ok so with renewed vigour away i went again in search of the last summit of the day,Beinn Eibhinn. 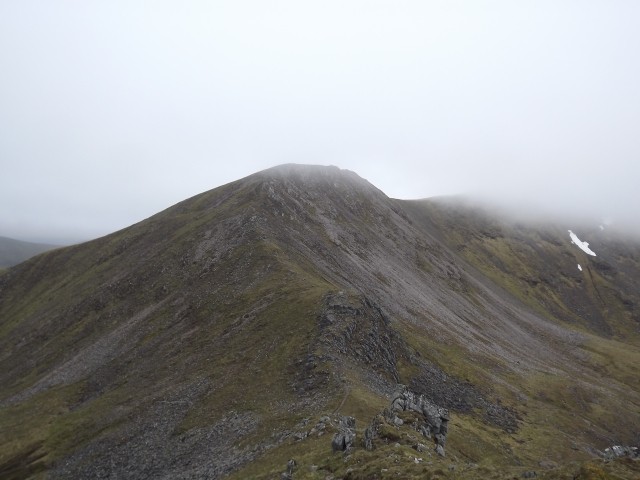 looking over to Beinn Eibhinn

After just under an hour i reached the summit of Beinn Eibhinn and was a very happy chappy that the bulk of the walk was over, 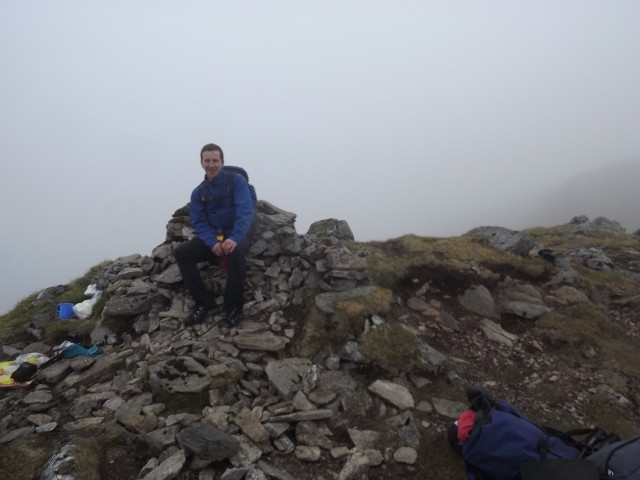 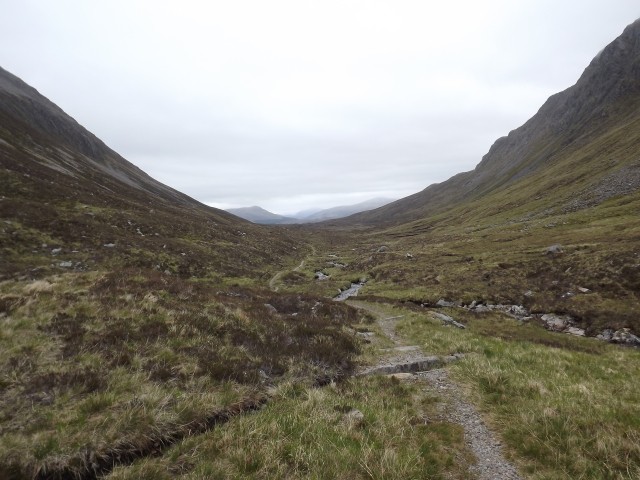 walk out to the bothy Arriving at the bothy i chose to take a ten minute break to get some liquids on board and have a wee tour of the bothy properly,signed the guest book then just as my backside hit the saddle once more the rain which had been promised started and i got soaked on my way back to Alder Lodge but at that moment i could not have cared less,i was feeling great at completing the round way ahead of my prescribed times and i have to say the cycle back to the car was much quicker than the road in.

I arrived back at the car at the back of 4pm and you couldnt have removed the smile on my face if you tried,i was buzzing at having taken,and (in my eyes) beaten the route i had been nervously dreading the whole week.

The drive home was brilliant due to my elation and now,at last i can turn my attention to a weekend on Mull with my family where i can eventually reach the milestone that is 100 Munro's

Apart from it being a big day, did anything else happen on your journey. Pics and report would be nice !

Good stuff Iain! You've got a lot of hills under your belt so far this year. Hope you enjoy the trip to Mull!

Great effort Iain. I wonder if I can squeeze a return to Culra into the summer holidays this year to take care of these four and Alder and partner???

Thats some effort you have put in there Iain,not sure my gammy leg would cope with that effort,well done

Got this lined up for myself, so thanks for the info.

Your fairly rattling through the munros, enjoy the ton.

Oh and i love your new photo

Great effort Iain; I love it out this way. Shame about the lack of views :s

cheers guys....knowing i would reach 100 this year has driven me on to bag as many as possible.The Alder area is one i'm looking forward to going back to but i'll defo be waiting for a clear day so i can get the views.

greame-if you camp or stay in the bothy you could bag the six no problem in one day....i had even considered it on sat as i was feeling really good upon reaching the stalkers path but Mull would have not been as big a weekend if i had
(and yeh,thought the profile pic was suitable

I can't remember how long it took me to do a pretty similar route, but you seem to have got round at a pretty decent pace

. One that should have Monty looking over his shoulder

Great effort Iain. When I saw 50km I assumed it was a 2 day job. Must be one of the longest day trips on here. Its only a two & a half hour drive for me so I could afford to take an hour longer getting round

Great effort in one day

. This will be an overnighter in Culra for me I'm sure.

Excellent report and some great pictures

) but intend to attack them from the Ardverikie side. It'll be a long, long day but worth it I'm sure. Your pictures will certainly help me in getting the route set in my mind. Thanks for posting

This brings back memories for us, all good ones. Well nearly.!
Your views were fairly poor all day on the ridge, that was a shame. At least the rain stayed away until you got off the mountain.

We did a 3 day route in the area last year, a pretty big route that was. First 2 days were good. Come our final day we were behind schedule, and when we popped our heads out the tent on that final morning the mist was right down and never lifted the whole day.


We completed 6 on our final day. We bagged the two that sits to the east of Loch Treig, and then ascended Beinn Eibhinn from the west ( my 100th )then carried on along the ridge. We then dropped down to the bothy before walking out.

We never saw a thing on the final day, may have to go back soon for the views.

It is a big day out, but worth it, shame the weather wasn't so good for you, but the pics are good. When I did these four, I was lucky enough to have a really good day. My route was slightly different in that I returned over Aonach Beag and Geal Charn because I wanted to cross the Lancet Edge of Sgorr Iutharn, which proved to be as good as it's reputation.