Here's Part 2 of 3 showing my Wainwright walks, actually this route is one of Bill Birketts, an area we had not been to but it was a really nice sunny day.

Whinlatter.gpx Open full screen  NB: Walkhighlands is not responsible for the accuracy of gpx files in users posts
We parked up at a small car park at Spout Force and made our way along the well made forest road where we eventually found the way up to Whinlatter by a fallen wall and the edge of a felled forest, very difficult to see the raised entry to this. The climb to Whinlatter Looking across to Broom Fell and The Lord's Seat

After negotiating the fences and walls we nearly got run over by a fell runner before reaching Brown How, the top of Whinlatter. This afforded us some great views to Grisedale Pike and its surrounding fells. 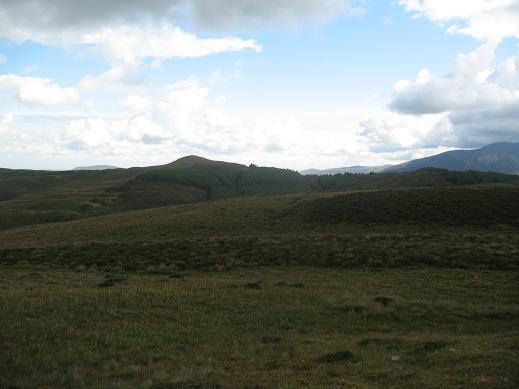 After skirting the woods and crossing Tarbarrel Moss and Ullister Hill (both Birketts) we arrived at the summit of the Lord's Seat. Here I left hubby to "nip" to Barf and in that time the midges set about him The journey to Barf was not too bad and a couple I walked with took a summit photo for me, I thought this was better than having to climb it in the future from the road below Now we could see our last summit, according to AW it is one and a quarter miles to Graystones. There are three tops on Graystones and Wainwrights isn't the highest, visits to all of them saves arguement Now we had a very steep descent back to the valley floor, the photo shows us already a third down There were still some great views as we headed for home. It seemed like more than 8.7 miles, perhaps it was the heat, later the midge bites took hold

but we enjoyed the area and the views were fabulous, also we only met about 10 people, one chap was completing every Wainwright route

Re: Wainwright Bagging-Part 2-Whinlatter Round

Enjoyed that as usual!

Just one thing... your deliberate mistake - you've put 'Tarbarrel Moos' instead of Moss!

Re: Wainwright Bagging-Part 2-Whinlatter Round

My secretary requires an update on his proof reading skills

the lake midges certainly made us itch