Mount Blair - wall-to-wall sunshine and the winds of change

Mount Blair - wall-to-wall sunshine and the winds of change


After the unseasonably good weather of April and the unseasonably foul month of May with it's wintery gales and fallen trees, June had made a promising start. The first Friday of the month marked the end of exam leave for students before the launch of the new timetable the following Monday, and with the sun splitting the bricks, I decided to make the most of the last of my teaching-free Friday afternoons to once again head for the hills.

I had used the last three days of my Paternity Leave at the beginning of the week to move house, a move that had left me feeling a little emotionally raw and reflective, so I felt the need for a bit of hill time. You don't shut the door and walk away forever from the house that you have lived in for 8 years, that you have basically gutted and totally renovated, that you got married in (well, not literally, but you know what I mean) and that your first born child came home to from the hospital, without feeling a little emotional. But then 2011 has been a real year of change in so many ways, both professionally and personally. The winds of change have been howling through the trees of my life. But heh, it might all be a bit of an emotional rollercoaster, but it's all good stuff. As Mr Stipe says - "Don't forget that change will save you".

I settled on the often driven past but not previously climbed Mount Blair. I hadn't claimed a new Graham since Creag Bhalg back way back in January so I was fair buzzing with anticipation as I parked by the gate a short way over the P&K/Angus border on the B951 road into Glen Isla.

I quickly booted up and traveled light - very light. A small daypack with a bottle of water, a first aid kit, an emergency tinfoil blanket and a spare long sleeved top. That and the shorts and short sleeved top I was standing up in. And the sunnies to protect against the glorious sunshine. And then I was off and up the grassy track past the sheep and their paraphernalia to the gate, then onto the more solid and defined track all the way up to the summit decorated with trig point, view indicator-cum-shelter structure thingy and massive transmitter mast. Despite the unsightly hardware, I was content to linger for 10-15 minutes at the summit and enjoy the panoramic views before returning to the car via the same route.

This looks like the more straightforward and less interesting ascent route onto Mount Blair (it certainly looks more interesting from the other side) and it provided me with one of my quickest hills ever - up and back down to the car in an just over an hour and ten. Set me right up for the weekend that did! 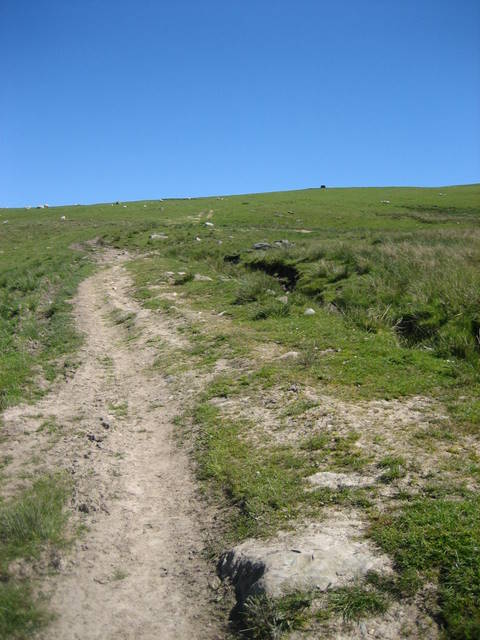 The car is already a rapidly shrinking speck on the road First sighting of the summit hardware 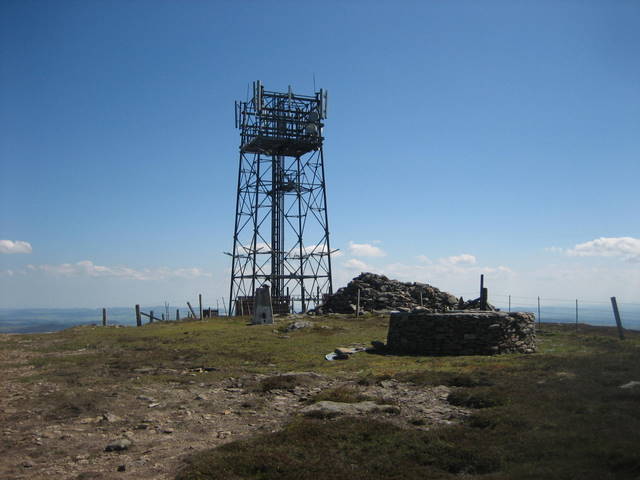 Memorial plaque - it's a popular place! 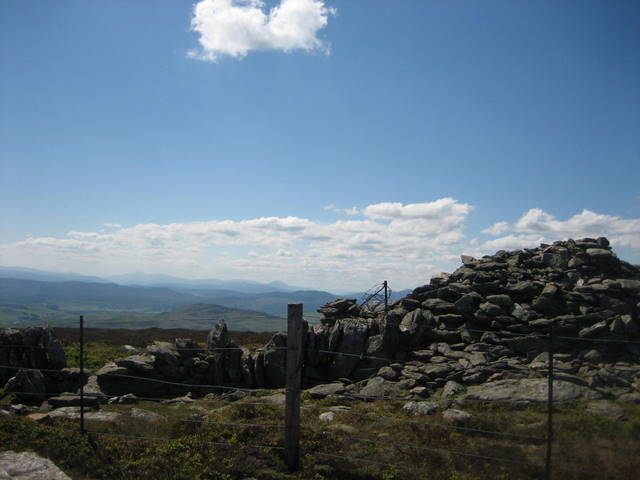 That bloody Schiehallion gets everywhere! Mount Blair from the A93 near the Blackwater Outdoor Centre

ChrisW wrote:Nice report Graeme and some great views from a little 'un - was that shelter/view indicator damaged or new (under construction)

Cheers Chris. There's a reference to it on a previous, much earlier Mount Blair report on here, where it was suggested that it might have been cannibalised by trophy hunters, but I reckon it's just been damaged by the elements. One section of the display is lying on the ground and another seems to be missing entirely. It could be on someone's mantelpiece I guess!