A long and tough route through lovely quiet mountains, with a spectacular centrepiece in the main Aran ridge:

our_route.gpx Open full screen  NB: Walkhighlands is not responsible for the accuracy of gpx files in users posts
For an area a little off the beaten track, the starting point in Cwm Cywarch caters really well for walkers – a well-appointed car-park, clearly marked paths in all directions and plenty of tempting routes to catch the eye. Beneath the dramatic green crags above, a zigzagging but still very steep (the direct vertical right of way shown on the OS looks impossible on the ground!) track sets off up the plateau south of Glasgwm. This is really gruelling stuff at the start of the day, but once on top it’s easy enough walking over short grass to the summit, with good views to the Dyfi hills and the Cadair range to the left and pretty little clear pools either side of, and very close to, the peak. After an interesting steep and rocky descent, it’s a bit of a marshy flat drag for the mile or so north and then up to Gwaun y Llwyni, but there are plank-paths over most of the trickier parts (these get a slating in some places, but seemed broad and safe this day, and certainly better than sloshing through the bog around them) and you can get there with pretty dry feet. After a slightly uninspiring spell, the views really open up from this sharp grassy wedge of a hill, steeply down to the valley below and up the higher peaks further on. And, once back on the main path, it’s a lovely climb through good ground and rock crops to the 905m top of Aran Fawddwy. Hazy sun obscured the more distant views, but even so you could see all of southern Snowdonia from here, including virtually the full twisting route of this walk. The main ridge to Aran Benllyn and beyond is a wonderful walk, gentle gradients over firm grass interspersed with easy but impressive rocky summits – the northernmost peak, topped with striking white rocks and right by the edge of a dizzying drop, especially catches the eye. Spectacular views throughout, especially down over the steep crags to the east, and – as so often on beautiful days in these Welsh hills – amazing to see almost no-one else anywhere in sight. The main route off the ridge seems to be over Drysgol, but there’s also a, narrow and unmapped but very clear, good path heading down the eastern spur of Erw y Ddafad-ddu to the lakeside below the crags, and then easily straight on up to the top of Foel Hafod-fynydd – with terrific views back to the main ridge from this pleasant little green hill. Back up descent path from Erw y Ddafad-ddu Unfortunately it’s not so easy to find a good route to the car-park from there (especially if planning to take in Pen yr Allt Uchaf too to complete the main Arans in one walk). The direct route down and up through the Llaethnant valley was just possible, but – in contrast to what had gone before – not all that pleasant: a damp and reedy descent and then, with tiring legs, a really steep drag up 200m or so over the grass on the far side of the river. Worse followed, with an area of dauntingly deep and wide peat-hags (reminding you of how close you are to the infamously boggy eastern Arans) to negotiate on Waun Goch before reaching Pen yr Allt Uchaf, the seventh Hewitt of the day. There’s something good to say about most hills, but this is a really nondescript little rise on the ridge and – given the difficulty of the approach (it would be far, far worse after any rain) – very probably a once-and-once-only visit.... Back to the good stuff after that though – the path gently dropping down the side of the beautiful Hengwm valley is another real pleasure at the end of the day. Perhaps this route might be improved by dropping straight down to this path from Aran Fawddwy after doing the full ridge in both directions? but still overall a wonderful experience on great mountains. 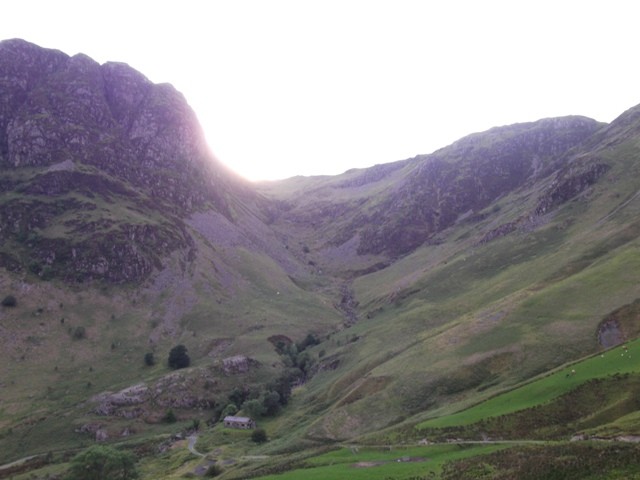 Great report and excellent pics. While I'm fortunate to have the lake district just over an hour away i do wish Snowdonia was more accessable for regular visits. Its a long trek for day trips.

Blimey those first peaks are steep and sharp aren't they? That looks a nice walk I've only done the 2 main Aran before - Benllyn & Mawddwy. Great photos