At the end of the sixties when I had just discovered Munros I moved from Northumberland to London to start a new job. I was soon pining for the Highlands and bought some half inch maps of the northern highlands to pore over in the evening. There were mountains everywhere - would I ever visit even a few of them? Lurg Mhor looked particularly lonely, and I couldn't even find a picture of it (there were no Munro guidebooks in those days, and Poucher didn't cover it). Over the years I climbed nearly every other hill in the area and even visited the Bearnais bothy, but not Lurg Mhor.
I hatched all sorts of plans to bag it - bothy trips, camping, long-distance treks and even snow-holing. But until this year it evaded me. Fast forward to 2009 and I am camping in Torridon with 2 visitors from New Zealand doing a west coast trip which included classic hills like the Saddle and An Teallach. The weather is good - suddenly the idea strikes - why not Lurg Mhor? We have a lazy afternoon and go to bed early - then up at 4.30am. The midges are horrific so we leap into the car in record time and set off for Glen Carron, stopping in a midge-free layby to make our sandwiches, before parking at Craig and heading off up .... what is that glen called? .... to the wire bridge which gives access to the path to the Bealach Bearnais. The river was down so we didn't have to brave the wire bridge. Several walkers were camped at the bridge and were just getting out of their tents as we passed. So up to the bealach and on to Beinn Tharsuinn - just a Corbett but a nice hill in its own right. Great views of Bidean a'Choire Sheasgaich start appearing. The path takes a devious line through crags on the big shoulder of Sheasgaich (see upper picture above) - the start is easily located by a stone wall on the bealach but it could be harder to follow higher up in poor visibility, especially on a descent. The going is steep at times and there are a few loose rocks to watch for. the path gets steep the stone wall is visible below

Sheasgaich is an attractive hill with some little lochans and a pointed summit, but after a quick look at the view we pushed on for the ultimate target. My long-time fascination with Lurg Mhor surfaced and my pace quickened as we neared the summit. The top itself is not particularly interesting but the location and views are fabulous. We wandered round absorbing it all for a while. 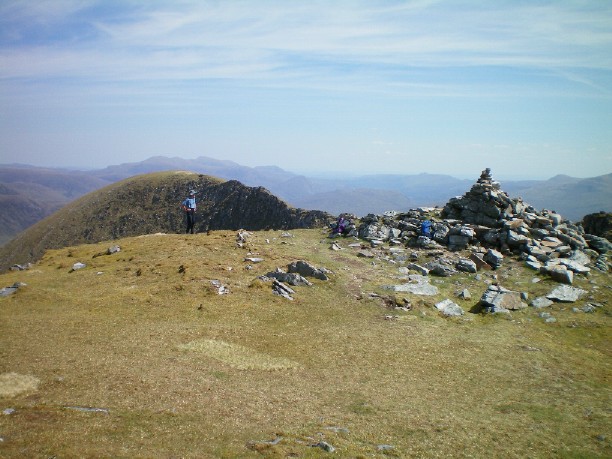 The nearby "top" of Meall Mhor is attached by rocky ridge with some scrambling, so we had to knock that off too. Looking back towards Lurg Mhor summit 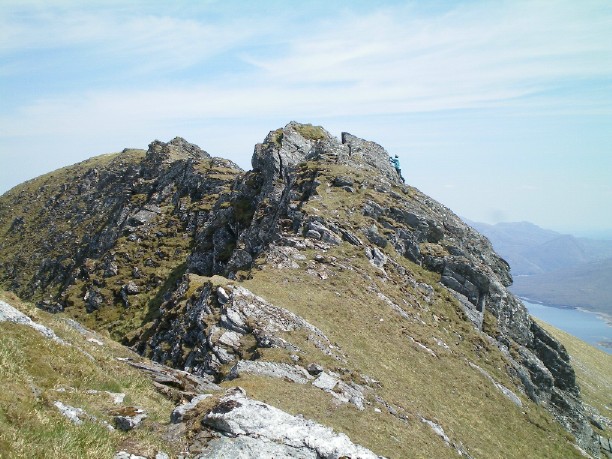 Reaching Meall Mhor seemed almost more important than reaching Lurg Mhor itself - it was the end of the line. The weather was beautiful and we hung around there for abour half and hour - it was just amazing to be there. My friends seemed to enjoy the experience, judging from their antics.................(well they are from New Zealand). Then back over Lurg Mhor (meeting a walker who had come up from Attadale and another who had canoed up Loch Monar) and back via a rather tedious flanking route along the side of Beinn Tharsuinn. We stopped at the Ledgowan Lodge for some food and a celebratory drink - then back to Torridon. A fantastic day but also mixed emotions - I felt as though a part of my life had been crossed off. I know the remedy. Plan another trip.

That climb up the shoulder of Sheasgaich looks positively evil - no doubt I'll be having to find a nice, grassy but much longer coward's route round it!! There must be one somewhere! I work with Kiwis by the way (courtesy of us having a NZ computer system) - they don't normally sit upside down!;-)

Mountain C, come up from Attadale instead (see the walkhighlands route) - that comes up the south side.

Great - another avoidable horror. I'll do just that! Hadn't read the route yet as I'm quite a way off getting to that area yet...