The dreaded 6 around theTarf Hotel.

The dreaded 6 around theTarf Hotel.


oor route.gpx Open full screen  NB: Walkhighlands is not responsible for the accuracy of gpx files in users posts

We changed our plans from doing the Mamores ridge, and decided on doing the dreaded six up the back of Glen Tilt. Weather forecast was meant to be better towards the east, supposedly. I had been avoiding this route for a while but now, with the predicted better weather in the east, this was now the time!

Once again we arrive late due to my nightshift! We did not leave the Old Bridge of Tilt car park till after 3pm. I had originally hoped to camp at the bealach to the west of An Sgarsoch, but at a very early stage I realised that this would not happen. And by the time we had passed Gilberts Bridge, and were heading towards the old military bridge I told Julie to prepare for a night in the Tarf hotel.

From the Old military Bridge it was a 3km hike up the ridge North, to the summit of Beinn Mheadhonach. Until now visibility was pretty poor and it had been raining on and off since we started, thankfully there was very little wind. We never hung around, we just carried on north for a short spell then headed due east towards Carn a Chlamain.

We arrived there wet; and again we carried on pretty smartish no time for hanging around. After a short photo session we head for Conlach Beag then on to Meall Tionail. From here we would occasionally get short glimpses of the bothy through the clouds. “Not far now” I said. arriving at the old military bridge looking down on the military bridge cairn and shelter prior to summit of Beinn Mheadhonach a pair o drookit rats on Carn a Chlamain summit looking towards the Tarf Hotel We spent a very good evening at the Tarf bothy; we had it all to ourselves. We found a Lump of Bog wood drying in the NE room. I spent 20minutes chipping it down with a steel poker, I returned the other half of the bog wood to the room we found it hiding in…… I also scavenged some bits of coal out of the fire. We managed to eat our super as we toasted our toes at the fire. What a great end to our day.

Next morning we were up and gone by 7am we still had a massive day ahead of us. As for the weather I never quite new what it would bring so the sooner we got going the better. The views near the bothy were good, but up at any height they were non-existent. We never got any decent views until later in the day.

The views from An Sgarsoch summit were poor, by the time we reached Carn a Fhidhleir they were starting to improve ever so slightly. And from there on the views stayed much the same.

We then skimmed round Carn Meall Tionail then headed on to Cnap a Choire Chreagaich, from here we got reasonable views over to the Corbett Beinn Bhreac. We dropped off from Cnap a Choire Chreagaich in a slightly wrong direction, we ended up descending the scree. We should have been more SE, ended up giving ourselves a bit more work than was needed. We then headed for the 845m spot height and carried on for the summit of Beinn Bhreac. 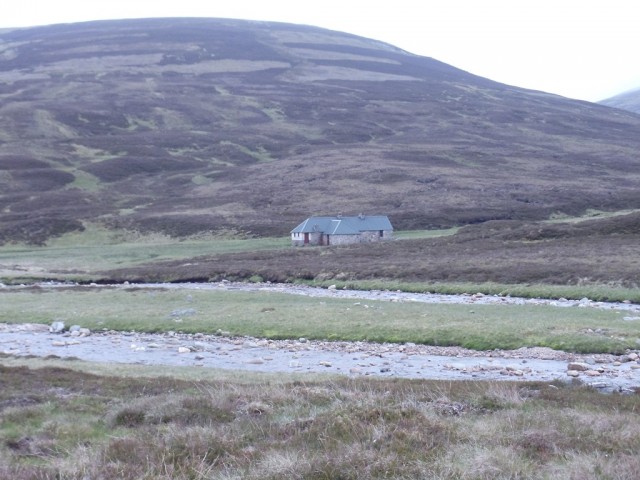 a bright start the following morning The views from An Sgarsoch summit Wilson looking to Beinn Bhreac from Cnap a Choire Chreagaich. looking back to Beinn Dearg Beinn a Ghlo on the outward journey. Another big round again Dave,you are fairly racking them up,Wilson must be one of the fittest dogs around,can I ask how old is he

I read that you were gonna do this soon. Excellent report on a big walk. I need to get fit and run round these

There seems to be no limit to your stamina

Another great report there Dave, you like your epics eh. The planking photo made me laugh

Your gonna have to teach Wilson to plank

The Tarf Hotel is a fine place to spend a night! Brilliant bagging in some pretty grim looking conditions!

- but I just don't get this planking stuff at all

have 5 of these 6 on my to do list but somehow don't think they'll all be in the same trip !

Just saw this - stupendous effort given the conditions. Fond memories of the Tarf - it looks to have had a wee repair to the North end.

I think I may have been the 1st to post a planking pic on WH. Then withn a couple days railtrackdriver created a thread that would create quite a debate.

I decided not to contrabute to that thread. Haha.