I`ve had this walk in mind for a while now and with an excellent weather forecast I thought i`d give it ago.
Got to the car park at Idwal cottage SH649604 OL17 booted up and walking at about 7-15am. Taking the path
from the car park signed Llyn Idwal I followed this well made path until it turned sharp right where I followed a
another path heading SE to Llyn Bochlwyd.The views were opening up and I got my first view of the west side of
Tryfan. Gradually gaining height it wasn`t long before I reached the lake, it is apparently nicknamed Lake Australia
because of its shape, but this cannot be seen from this level. But still had to take a couple of photo`s the
second using the canisp technique of holding the camera a couple of inches above the water.Thanks for that
tip canisp it gives a completely different perspective to the shot. Leaving the lake the path got rockier and steeper on route to Bwlch Tryfan where there were great views up
Bristley Ridge. I`d read about this way up to the ridge but thought I`d have a good look before deciding my
route.It didn`t take me long to decide,not today thank-you. My route to the ridge was to the left of Bristley up a very steep scree slope it was very loose scree and a real
effort but it gave time to admire the views with the amount of rests I was having. Eventually reaching the ridge a young chap caught me up having come up the same way we spoke a bit about
Bristley,he had done it before but didn`t fancy doing it on his own with no-one else about,sensible.
He went on his way and I made my to the summit of Glyder Fach, I really had to watch my footing with the gaps
in the rocks eagerly looking for an ankle to break or twist.But the views were worth the earlier efforts. Descending down to Bwlch y Ddwy Glyder the going was alot easier and so was the ascent to Glyder Fawr where
it was time for a break and to enjoy the views over to the Carneddau. Carneddau in the background

Suitably refreshed the next leg was to descend to Llyn y Cwn this was again very steep and very loose scree making
it a difficult descent. From here it was up again to Y Garn the old legs begining to feel it a bit now but a good solid surface made it a bit
easier.Had a brief chat to another bloke only the fifth person I`d seen on such beautiful day, but he explained he`d
tried to park at Pen y pass for Snowdon but the park was full even though he`d arrived before 9am.A quick photo
of Angelsey and I was on my way again. 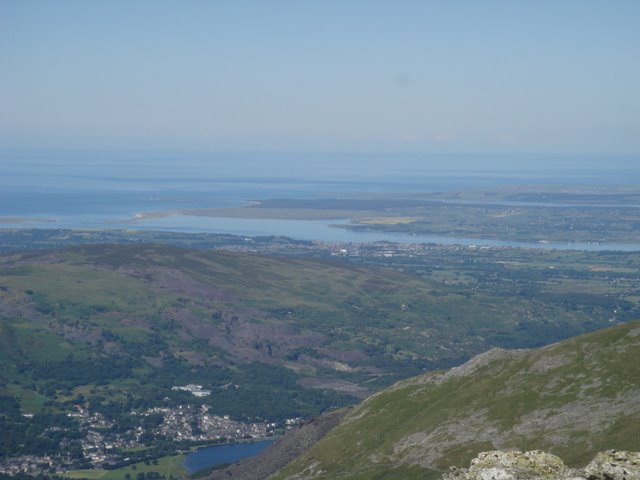 Angelsey over the Menai Strait

Leaving Y Garn northwards I must have gone into complacency mode as I day dreamed my way down intending to
descend back to the car by the north east ridge path, I suddenly realised I`d over shot this by at least a kilometre
and about a 150 metres descent so after looking at the map I thought I might as well go for Foel -goch and make
my way down from there which I did.There was no path marked on the map so it was a matter of trying to find
the safest and least steep route and after what seemed an age I made it to the old A5 and tarmaced it back to
the car.Not what I`d planned but something different.

I would never try to park at Pen Y Pass - main reason being that it's far cheaper to get the Sherpa bus up from the valley (LLanberis is most frequent service) and you can set off when you want. In summer the buses back down run until quite late. If you're doing Snowdon, you have the huge advantage of then being able do descend a different route/side of the mountain. I realise you weren't doing Snowdon in this case but the same applies for anyone wanting to do the Glyderau from the Pen Y Pass side - although admittedly most people do them from the Ogwen side.

Love your pic of Llyn Australia! Have looked down on that tarn many times but never realised that it looked like Australia - it does though!

Some really cracking photos there GarryH... I too wimped out of Bristly ridge.

Great photos and a great walk, we did this last year and did the ridge, we'll have a go at everything, do remember my knee aching alot when we had finished though

Well done for doing Bristly Sue,I`d read about,the sinister gully,the chimney and the great pinnacle gap so was put
off before I`d even arrived. Maybe another time, as I was really impressed with the area.