After weeks of all manner of obstacles preventing me from getting out and about, I was determined to make this trip and this climb, no matter what happened. I have still to write reports on my earlier outings this year, and I will get round to them, but I'll start with this one anyway.

My aim was to leave Nairn around 04:00 am. Early I know, but I always like to get as early a start as possible so I am out and about for the early light/sunrise photo-ops! As it was, I ended up running about an hour late and although it didn't really make that much difference, I like things to run smoothly from the outset or I feel there'll be a knock-on effect leading ultimately to some sort of disappointment.

So imagine my shock and horror when, as I headed to the underpass, I was confronted by a notice telling me the "due to essential bridge repairs....blah, blah.....the trails are closed...blah, blah....sorry for incovenience etc etc.....blah flamin' blah!!

Now, I'm in no way endorsing the cavalier attitude I adopted on this occasion, but having weighed up the fact that I'd just driven a long, long way very early in the morning to get to what was to be my first actual climb in over two years. And bearing in mind that I hadn't arranged a stand-by alternative,

I decided to cross that bridge when I came to it!!

The first section of the climb winds steadily through pine trees and gradually gets steeper. Looking back as I climbed, the views expanded and the summit of Slioch was shrouded in cloud. Loch Maree looked ever fabulous and the higher I got, the wider the views became. There are a number of cairns to mark the way, and some have the altitude marked on them. I found this remarkably helpful since I was alone and although there are a couple of points where one could go slightly awry and stray off the trail, this wouldn't pose too much of a problem, as It's easy to get back on it once you realise you have gone wrong. The cloud-shrouded summit of Slioch!

Although it was a little dull, the backward views were superb. The going was a little harder now that I was out of the trees, and one could imagine underfoot would be rather tricky in wet weather. Given that my heart and circulation problems mean I have to stop and rest regularly, I was making pretty good progress. I far prefer the rocky and steep climbs to the sometimes boring zig-zagging paths - just my preference, as walking on gradients tires my legs more than climbing or semi-scrambling. Anyway, I was making good progress and I was delighted with the views - onward and upward!! Looking back down the steep, rocky path.

This is by no means an easy climb, but makes for a very exhilarating outing and I would presume that on a really bright summer's day, the views would be even more stunning! Just stopping and looking back was an extremely pleasurable experience, dull or not. And at least it was dry

So, higher and higher, and various cairns later I'm happily staring at the ridges of Beinn Eighe itself and recalling my own ascent of that particular Torridon giant, (completed before I joined walkhighlands and prior to my by-pass op) with it's gleaming scree-covered slopes. The conservation cairn provides the viewpoint, and I spent a good while here taking pictures, (of course) and decided to partake of a modest lunch at the same time. As always in these circumstances, I was filled with an immense feeling of freedom and solitude, and it occurred to me that for once, I may well be alone on this part of the mountain, since others may have indeed heeded the warning about the bridge and decided against proceeding. After my lunch and well-earned cup of tea, I set off on the return path which was to take me past a series of small lochans. As I looked back after skirting the first of those lochans, my earlier theory was to be disproved as I found myself looking at a lone figure staring back at me from above it! A lone figure above the lochan

Continuing on, I came to the oddly named "Lunar Loch". Why it should be named so is not clear, as it resembles a lunar landscape no more than any of the other surrounding lochans on the hill. Still, it is as picturesque as all those others too, and I was delighted to view some newts close enough to the edge to photograph before I continued my descent. After Lunar Loch, it doesn't take long to descend once again into vegetation, and the deep gorge is lined with birch and pine trees. By this time I had hoped that Slioch, which had again come into view, would have a clear summit, but sadly no - not yet

As I continued to wend my way back down it occurred to me that I was about to come across the problem of the bridge crossing. I shrugged and decided, "well if I have to get my feet wet, it's still been worth it!" and on I went. Passing the "Lone Pine" and with lovely views westward down the length of Loch Maree, it wasn't long before I found myself at said bridge. 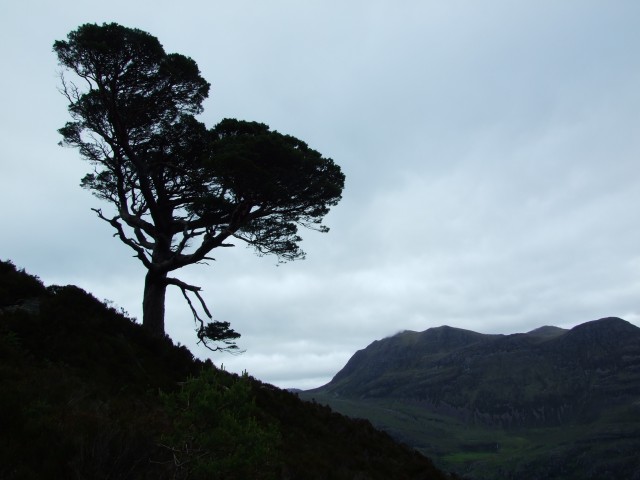 The "Lone Pine" and Slioch summit still not clear.

Any worries I might have had were banished now, as I could see that the bridge had actually been more replaced than repaired and the problem was that it was not quite finished. However, I was able to cross with out any trouble and only a complete moron would have found themselves with any problems. I do not however, endorse or condone flouting any kind of safety regulations or disregarding any instructions that are put in place for the safety of ones self or others in the countryside nor anywhere else. I admit to being perhaps foolhardy on this one occasion, but I would not expect others to put themselves in any danger in any way.

In conclusion: I had a most enjoyable and full-filling climb on the Beinn Eighe Mountain Trail and would have no hesitation in recommending it to others. Fantastic!!

After my climb, I took a short drive down to Redpoint, and on my return I managed to get plenty of shots of Slioch with a now very clear summit. Here's one: