If you can tell me a better way to spend the longest day than climbing your first munro, I’ll give you a packet of jelly babies! I’m a relatively inexperienced walker when it comes to hills, the outdoors, and navigating in the wilderness, but as someone who is fast becoming addicted to hillwalking, it was time. Time to practice the map reading and using a compass. Time to do a munro. And cousin Lorraine came to the rescue, with a plan to do Lochnagar.

She lives in Aberdeen, so I drove up from Glasgow on the Friday night, but it was still an early rise on Saturday to pick up the other 2 recruits before heading out the road. Not an ideal start, as Jill had managed to lock herself out of her flat with all her gear sitting in the hall. The neighbours didn’t seem to want to get out of bed at 7.30am to let her in, but thankfully her dad was nearby with a key.

I admit I was a little concerned about falling off a cliff face, or getting stuck on a ridge somewhere, but Emma said Lochnagar was definitely not an “anxiety inducing” mountain. She’d been most of the way up before, but had to turn back due to encountering hailstones the size of apples. It was June, so I hoped we’d be ok this time!

We’d figured out the route on the map from the description here on the website, and headed off up the path. 5 minutes in and the rain started falling. The weather wasn’t sure what it wanted, swinging from hot to cold, drizzle to not. Unfortunately enough moisture for some of my curls to re-appear though! But my trusty buff was with me, to keep my hair from my face. The first part of the route was an easy walk, clear paths to follow, nice and wide. Good to relax us into the journey. We crossed the river second time lucky, first choice of route didn’t have quite enough boulders for our short legs! 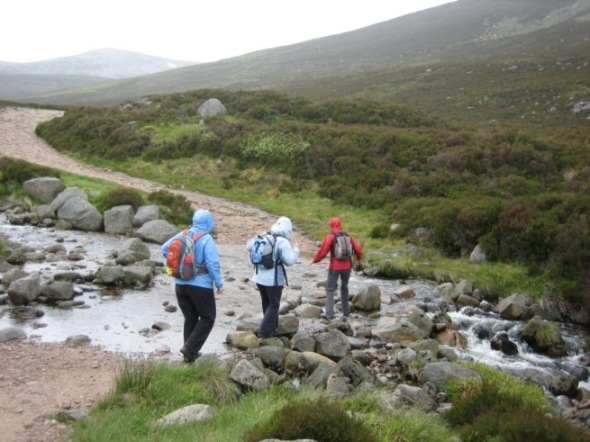 We spotted the first path leading off the main one, so stopped to check the map, make sure we knew where we were, and could see Meikle Pap ahead of us, with our destination beyond it. 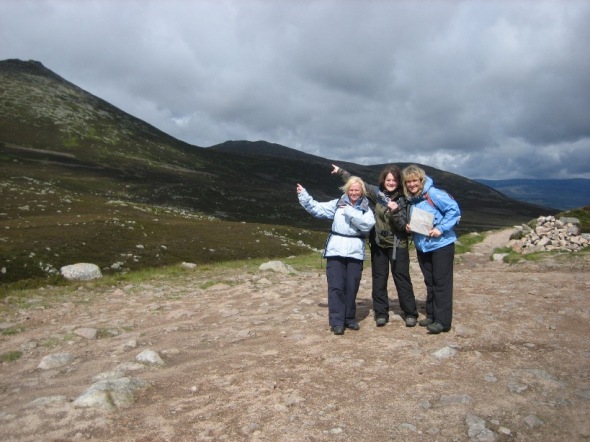 A quick reset of the compass and off we went, with the path thinning out and becoming steeper. The ground became rockier, and we followed the stone path up towards the corrie. The stones all around were all covered in very bright green stuff, moss of some kind I guess, but nearly luminous. Perhaps it was the fresh air, but I started imagining that it was either from the biggest and most remote paintballing tournament, or that aliens had been at war and it was their blood…. Looking down at Lochnagar itself is a great sight. Obviously not from the very edge, as that would be a bit scary. But we were close enough to appreciate the view, and imagine how cold it would be to have a swim.

The next part was where longer legs would have come in handy. The steep boulder climb. From afar it was hard to see a path through the rocks, but up close it was obvious where to go. I’d say I’m more hobbit than supermodel when it comes to height and as I was stretching my wee legs to get up some bits I did feel like I was in a scene from Lord of the Rings. But I promise I don’t have hairy feet.

There were some gusty bits, but as we got further up we could see more blue sky, and the sun was getting hotter. A flatter walk along the top of the cliffs and we were nearly there. And then a cairn came into sight! But we were not fooled, we knew we still had to go a bit further.

The summit itself was pretty busy. As I climbed up the last wee bit to get right to the marker, I felt a wave of happiness. Walking makes me happy. The beautiful Scottish views make me happy. Knowing we’d made it to the top, and it wasn’t really all that hard, and I hadn’t nearly died at any point, made me happy! The sun was out, and the only thing that might have made me happier was if there had been an ice cream van so I could have had an ice cream with a flake in. But that would have spoiled the views. Which were just amazing. You could see for miles, all round. We took it in turns to get right up to the marker and get our photo taken, prove we’d done it. If only I’d remembered that I was still wearing the buff round my head to keep the hair from my face, then I wouldn’t have looked like Johnny Depp in Pirates of the Caribbean in the photo! Also took a photo of the marker pointing out the other hills around, but Jill’s bright pink fingernails got in the way, proving that hiking girls can have some girlyness! 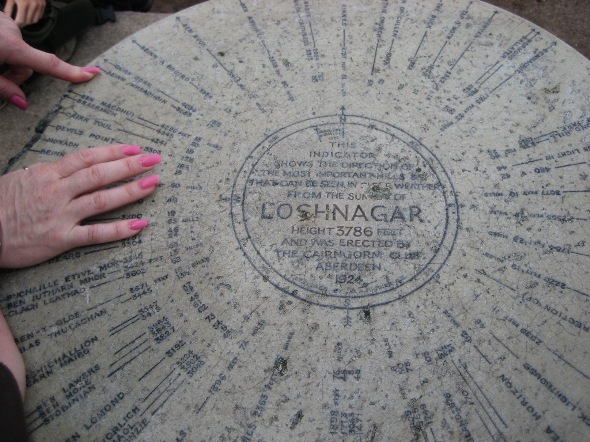 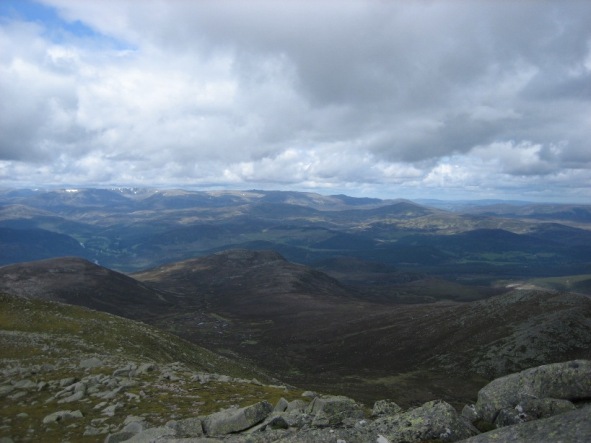 It was so nice that we stopped near the top for lunch. Which is another of my favourite things about hillwalking. Food in a flask. It used to be soup in a flask, but now that I have a food flask (short fat flask) I’ve moved onto pasta for lunch. It was a wee bit breezy, but worth it for the views down towards Loch nan Eun, I could have stayed there for hours. We’d decided to take the different route down by Glas Allt, as described here, and headed off on what we thought was the right path. But it wasn’t. We noticed before it was too late though, and were actually glad we’d gone wrong, as we bumped into Emma’s man and his pal who were on the way up. They’d been hill running, and this was to be their seventh peak of the day. WHAT? Mad I tell you. And we also spotted the Bum Rock. Indigenous to the Cairngorms I believe. Maybe it was someone telling us we’d made an a**e of the route down… 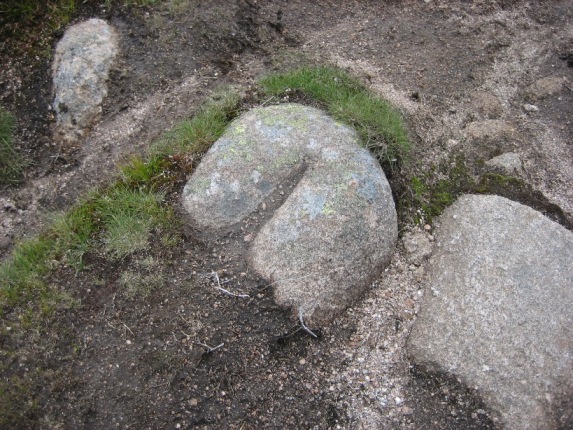 As the path lead us closer to the cliffs by Loch nan Euan, and the compass was pointing the opposite way, we realised we were going the wrong way, but the map told us that we could just cut straight across and find the path without encountering anything bad. We also spotted some mountain hares, and I felt a small lump in my throat as I hummed “Bright Eyes” to myself. We spotted the path we were meant to be on, and it was a lovely one to walk down. I thought this would be an easier route up. The path followed the river down and with the sun shining it was beautiful to wander down, hearing the water rushing by. And then the path became very thin and rocky, and twisty, and quite steep. So perhaps not a good way to go up! But the views on the way down were superb. The Falls of Glasalt were glorious, and we stopped here for a drink and a chocolate biscuit. The view from here down to Loch Muick was amazing. The loch was so dark and it was backed by a huge cliff face. The final bit was the walk along Loch Muick, which seemed never ending. But was flat, which by this stage was quite nice. Along the last section we spotted a load of red deer, grazing, or having a chat, whatever deer do when they gather. And then it was back to the start. Where we took the obligatory “I’ve been there” photo at the map in the car park. My first munro. 7 and a quarter hours including lunch. I was happy. And was ready for a wee glass of wine.

Excellent first? post! Trouble is - my neighbours hated it! That's 'cos I'm reading it at 22:39 and have been shrieking with laughter! Especially at the 'bum rock'

How do those long pink nails not get chipped? I can't keep a nail on my fingers in the mountains! What a great mountain to pick for your first - I still haven't got to it yet

Think this post will get a lot of hits when everyone realises there's pics of lassies on it!;-)

Great first report , glad to hear that your are getting hooked on the hills
hope to see you and your pals about some time

A well written report. Well done on your first munro. I have many munros to do including this one myself and your pictures of the bum rock

and circular stone at the top are great.

IMHO, the best Munro in Scotland. You did it proud in your report.

. Grand effort on Jill's part with that manicure, too

. I'm also a firm believer in looking my best up a hill, as you can tell from the hat

Well done to you! Great effort, the first of many I am sure.

well done cousin, is that you got the bug now.

great report hoping to do the lochnagar 5 sometime this summer.