Ben Donich - Ease myself back in

Ben Donich - Ease myself back in


It took about 6 weeks but I eventually managed to get back on the hills last weekend with Maz n Gaz after my nasty knee injury. Still sore but just couldn't wait any longer, was desperate to get out there and I'm glad I did! Ben Donich was the hill of choice this time, hoping it would be a nice easy one to break me in again.

It was a bit of a last minute decision to go, so I was completely unprepared for the weather which I only realised once in the car and en route. No proper jacket, no waterproof trousers, no hat, no gloves. The closer we got the worse the rain and wind got.

Anyway, once we arrived at the car park it wasn't that busy as we'd left it quite late and didn't start until after 1pm. This gave us the hill to ourselves for the most of it though apart from a few people decending early on and a scary dog at one point.

We started off in the rain and I managed to borrow Maz's waterproofs which were surprisingly a perfect fit!

Not long later though the rain stopped and it cleared up a bit, thinking we were in for a nice day. Weather cleared up, jackets off!

We reached the wee scrambly drop soon enough which was fairly easy to jump down, no problem for all three of us. At this point we could see the rain and fog closing in from behind Beinn Narnain then getting closer and swallowing up The Cobbler. We knew it was just a matter of time before it got us. Then all of a sudden the fog engulfed us and spoiled our views completely. Not long later though, in traditional Scottish fashion, the weather changed again completely and the fog quickly shifted away just long enough for us to spot the summit and the trig point in the distance. 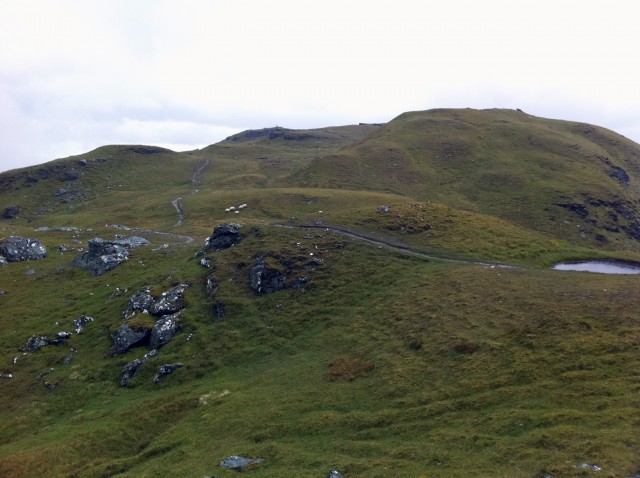 Fairly easy walk from here on up to the top, only made difficult by the ever changing weather. But we all made it in one piece. I ran ahead to touch the trig point first. I always have to win!! We didn't hang around at the top much as there was not alot of views to be had with the mist plus it was freezing, raining and very windy! Could see The Brack in the background which I would like to do another day with Ben Donich again but we didn't have time or energy to do it this time. On the way back down we (I think I was blamed for this though) lost our bearings due to the fog and pulled left a wee bit off the path but it gave us a beautiful view back down to Beinn an Lochain, Loch Restil and Binnein an Fhidhleir in the background which I fancy doing next as I hear it has brilliant views. Back to the rocky section now where we hung about and got some pictures. Going back up this I thought was more difficult, especially in the rain. There's a small foothold at the bottom which helps though. Gaz pondering how to get up the rock.

And that was it, the fog and rain came in again as we were descending but made it safely back to the car and jumped into Arrochar for a much deserved fish n chips. 
Ben-Donich.gpx Open full screen  NB: Walkhighlands is not responsible for the accuracy of gpx files in users posts

Re: Ben Donich - Ease myself back in