This is a walk that had been on my 'to-do' list for a while now, but for some reason due to circumstances and more circumstances it just hadn't happened. But an improving weather forecast for Sunday was to put that to rights for me at last

Arriving at the car park the omens looked good, with broken cloud, so plenty of patches of blue 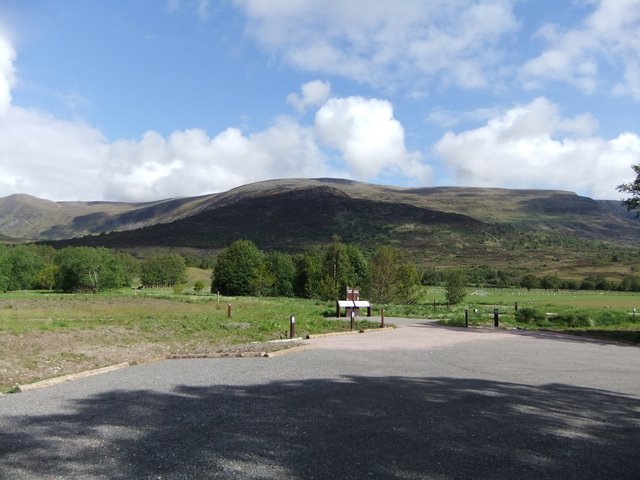 Early view to the route up Carn Liath

Having read a few reports on this route I had it in my head that the approach path was going to be boggy, but the initial path is excellent , taking you all the way into Coire Ardair and the picturesque lochan a choire. My route was to travel along this path for a short while, gaining a bit of height, before heading off on a proper (meaning at times boggy

) mountain path up on to the broad ridge up Carn Liath.

This was where I had another misconception about this route. I had got it into my head that the route up onto Carn Liath was going to be really steep and take me an age. While it was steepish to the nobbly Na Cnapanan and a little beyond, the angle eased off considerably soon afer and I found myself fair motering up to the main ridge and the short trek to the right up onto the summit of Carn Liath.

The route up gave a nice view of the top, coire a chriochairein Looking toward Coire a Chriochairein

Also got an early view of 'the window', which I was looking forward to tackling later in the day Early view of the window There's a nice, sizeable cairn at the summit And some reasonable views too The route ahead from Carn Liath It's easy walking all the way on good ground and absolutely no problems at all. Got a nice view of the lochan in the coire Lochan a Choire and the cliffs of Coire Ardair View back the way I had come As is often said in many route descriptions, 'all too soon' I was on the summit of the second munro of the day, Stob Poite Coire Ardair, with good views toward the Meagaidh massif

I'm sure the good weather helped of course Until now I had enjoyed a solitary walk, having seen no-one since leaving the car park. It wasn't until I started to descend toward the window and the trek up on to Meagaidh that I met my first walkers - a couple seemingly doing the same route but in reverse. On Meagaidh itself there were considerably more people about, but we're not talking Ben Nevis proportions here by any strech of the imagination

Walking up onto the Meaghaidh plateau I cdecided to take a little walk around the Coire rim and take in the view of the ridge I had just walked. I couldn't get it all into a single shot on the camera, but standing there soaking in the view was amazing That Meg, she was having a larf

Luckily I wasn't fooled as I could see the actual summit, which was another easy stroll to the top. 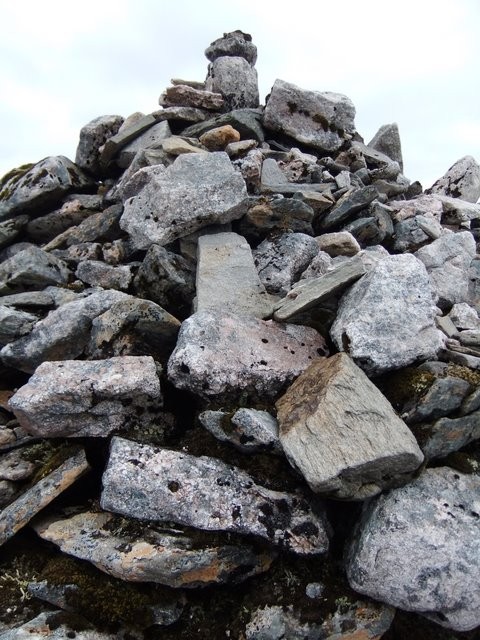 I spent a bit of time wandering around on the summit, but unfortunately it had turned a little hazy so the views were a bit compromised. I was also interested in heading down what I think is the south ridge in order to get a view of Beinn a Chaorainn, a hill I had walked in the winter but had seen precious little of or from owing to the mist that day the wife was wanting lift into work

)
I'd heard a lot about the window and how steep it was at the top. Well, it was reasonably steep at the start, but never would I say it was that bad. A bit loose and gravely for sure, but then I chose to pick up an old path picking its way down through the stones and boulders which was looking a little easier on my legs. Anyhow, the gradient soon eased off as the paths all seemed to converge on a good track heading toward the Lochan a Choire. Heading down through the window

Lochan a Choire and the cliffs of Coire Ardair

I don't think there are superlatives enough to describe this wonderful place. It was truly amazing.

I spent a few minutes just sitting beside the lochan looking out in awe at the magnificent cliffs. For those brief moments it was just so peaceful and still. I could have stayed there much, much longer, but the wife and her lift and all that........ Back toward the window Sitting beside Lochan a Choire And with the window

The walk down the path, back to the car park, was a nice pleasant way to end the walk. As I headed down the sun decided to break back through the clouds (which had thickened a bit earlier in the day), which just made it an even better walk back. For some reason (and goodness only knows what it was) but I felt inspired to break out into a steady jog every now and again as I made my way back

It must have been the sun. Walking! I can do walking!! But jogging?!

But for some reason I seemed to be enjoying myself today and actually enjoyed the jog. And it made quick progress of the route back

Will think at least twice in future.

Despite my fit of madness I was still able to appreciate the fantastic views up and down the path. The beautiful route ahead

Again, all too soon, I was back at the car and the long drive home, but not before a final view along lock laggan to finish off the route Overall I found this to be an excellent walk. Personally I found all of the paths to be good. I can imagine the path up onto Carn Liath could be boggy after rain, but I must have had good fortune smiling down on me

The ridge was a nice easy stravaig, with no technical difficulties. Meagaidh was no problem either, although I can imagine this being a different proposition in mist or rain as it would most likely appear to be a featureless plateau in those conditions. The window wasn't quite as steep as I had expected, but then in winter conditions I might well have to reconsider my opinion there

The walk back from the Coire was the perfect end to the walk, although I could also imagine this route in reverse, heading into the Coire with Meagaidh in view all the while would be good too. If I return that is what I will probably do.

Can't wait to come back in the winter too, when this whole walk would be a different proposition entirely

I'm whispering about that plan though ........ don't want the wife to hear

Overall it looked like another great day in the hills

Excellent timing Peter - on my (ever lengthening) to do list as well. Enjoyed it and will note for the future. cheers

Nice report Pete, looks a brilliant day out.
I didn't realise there was a path up/down from the Window. Must remember that for when I do these.
How long did it take you?

ChrisW wrote:Great report Pete and some stunning pics as always - I'm not to sure about breaking into a jog now and then en route home

Overall it looked like another great day in the hills

Thanks Chris. This was indeed a greta day out and an excellent walk. I was expecting it to be a bit tougher than it was (especially after a few weeks away from the hills with May being so awful), but it was never difficult or too steep at all (even the famed 'window'). Maybe that's why I still had some energy left for the jog

skuk007 wrote:Nice report Pete, looks a brilliant day out.
I didn't realise there was a path up/down from the Window. Must remember that for when I do these.
How long did it take you?

But in all seriousness it's never that bad. A bit steep but never daunting and not that long so soon over and done with, although I can imagine my view would change in the wet

With snow then the window would definitely become a very different proposition.

Sorry, forgot to mention time. End to end, with stops came in at about 7 hours 50 minutes. Wasn't rushing particulalry and spent plenty of time on the Meagaidh summit as well as by lochan a choire, which was a magical place. So this knocks a bit of time off the actual walking.