Braeriach from Linn of Dee

Braeriach from Linn of Dee

We set off from the Linn of Dee car park, in the general direction of Derry Lodge taking a short diversion through the deer fencing enclosure to walk alongside the crystal clear Lui Water and its shallow waterfalls. After a few pauses along the way to adjust our heavy rucksacks, we soon reached Derry Lodge. It's a shame that the lodge is boarded up and isn't being put to good use especially as it's a listed building, but perhaps it's just too big to be used as a hostel. According to Historic Scotland:

Derry Lodge displays traditional local features, most notably the large number of gabled dormers. The use of both traditional materials, granite, slate and timber, and methods of construction are clearly apparent. Evidence suggests that part of the building may date from the 18th Century (Jamieson, p48), although this is not conclusive. However, the building is apparent on the 1st Edition OS, and had taken on its U-plan form by the 2nd Edition. Derry Lodge, although small in scale for a hunting lodge, is the only one of six such lodges on the estate to remain intact. These made a vital contribution to the functioning of a Victorian hunting estate. They were used to accommodate hunting parties, both for meals and overnight accommodation, when the size of the Estate made frequent returns to the main house impossible. As a part of this Estate the building also has close connections to the Dukes of Fife and the Royal family. The Prince of Wales (later Edward VII and father to the Duchess of Fife) was a frequent visitor and resident here.

We stopped near the Lodge for elevenses then headed up Glen Luibeg, eventually crossing the river itself, opting for the dry option of the Luibeg Bridge rather than risking getting wet fording the burn (I have a bit of a phobia of river crossings after slipping in the Dibidil River on Rum and falling down a miniature-waterfall...).

Within an hour the imposing Devil's Point came into view, and it was a relief to also see Corrour Bothy for the first time. There were closer objects of interest too... 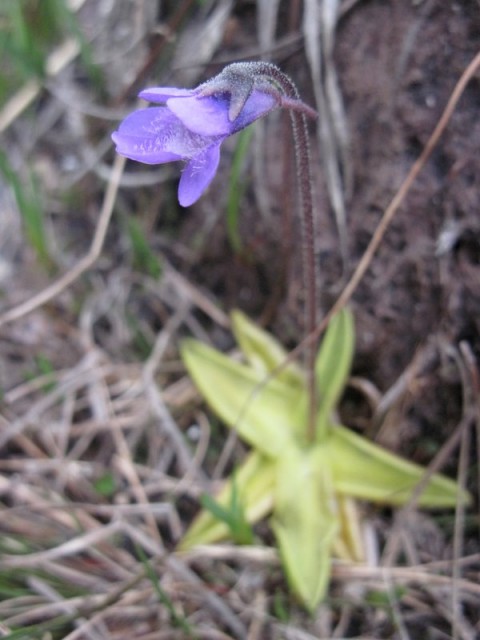 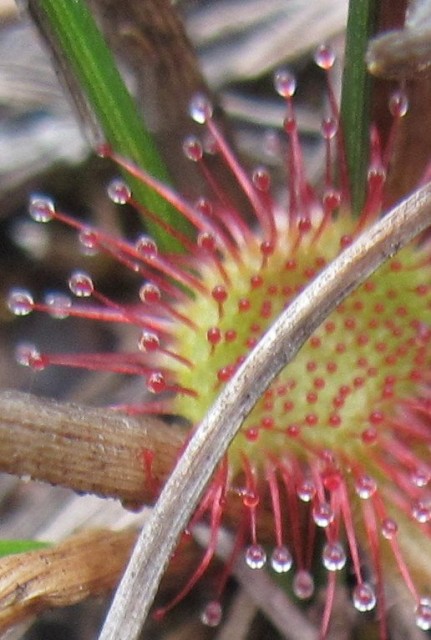 Finally, we arrived at the Corrour Bothy where we had some lunch, dropped off our heavy rucksacks, and unravelled our sleeping mats to 'bag' a couple of sleeping spaces early (hoping that this wasn't contrary to the 'bothy code'). We then set off towards Braeriach, taking a rough, discontinuous path on the west side of the river and occasionally following what seemed to be dry river beds (wadis, maybe!). It took us a while to find a suitable place to cross the Allt a' Gharbh-choire (sadly no bridge here), but once this had been negotiated we headed up the steep, heathery and rocky slope to the south of Coire Bhrochain, trying to avoid the hidden holes. We accidentally disturbed a family of grouse, and hoped that the fleeing mother soon returned to her chicks.

The views of the surrounding corries and glens became more and more impressive the higher we went - there was a particularly grand view over to Lochan Uaine below Cairn Toul and Sgor an Lochan Uaine.

Shortly we reached the rim of the corrie below Braeriach, its rocky ridge partly cloaked in cloud. 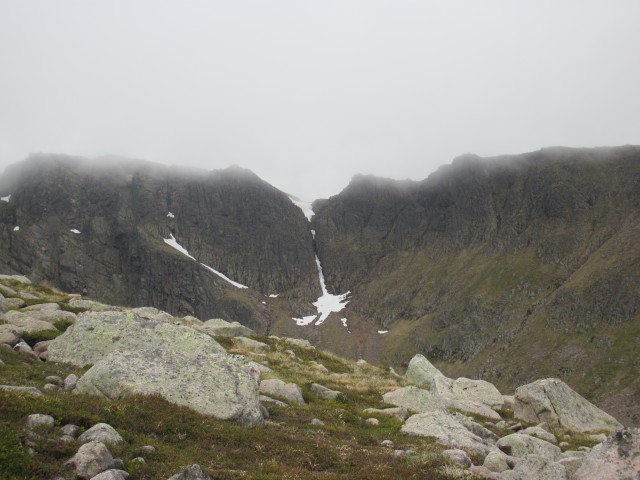 We skirted around the ridge to the summit which by that time was covered in cloud but there were still dizzying views down the steep corrie sides. 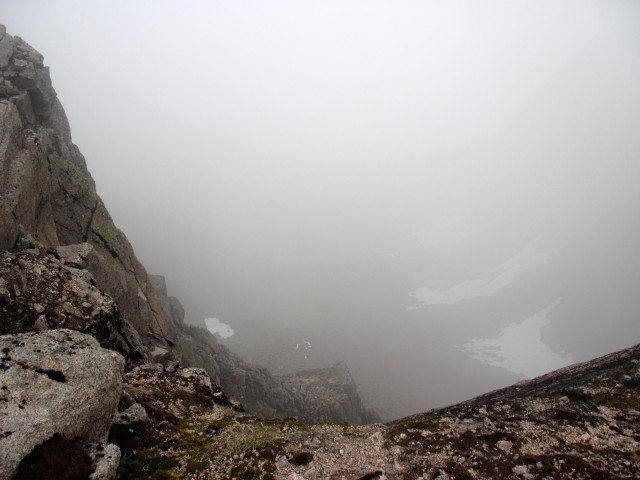 Dizzying views from near the summit of Braeriach.

Our thoughts by this time focused on a bothy dinner of tomato pasta and apple crumble, so we didn't stay long at the summit but instead descended directly south towards the Garbh Coire shelter. Whilst walking down the easier slopes, we discussed how much more interesting this route up Braeriach was compared to the long slog from the north. My walking companion mentioned a 'conspiracy theory' that guide books usually recommend well-trodden routes up munros, so that other potential ways up the hill are avoided and left undisturbed for wildlife. Maybe that's why I'd not found our route in any guide books, and why we'd disturbed various nesting grouse en-route - we must have gone 'off-piste'!

On reaching the Garbh Coire shelter, we realised that we'd made the right decision not to stay there overnight, although it was in better condition than that implied by the 'ruins' label on some maps. Tired but content, we returned to the surprisingly quiet Corrour Bothy, where we had our long-awaited dinner, washed down by a single bottle of Cairngorm Gold - a very worthwhile extra weight in my rucksack! Returning to the bothy

Nice report and pictures.
Thanks for pointing out that second bothy, I'd never even noticed it on the maps before, though I'm not too sure I'd want to stay there. Interesting route up Braeriach, I'm guessing there was no path?

Good report. It's interesting to see that the Garbh Coire bothy has even been patched up a bit since I was last there. I've been up that route onto Braeriach before, carrying my tent and it's a big boulder slope - hard work, but worth it.

Hi Rockhopper, skuk007 and Border Reiver, thanks for your replies. This is my first walk report, although I've been enjoying reading others' walk reports and following the walk routes on the site for a couple of years now.

Yes, the Garbh Coire bothy apparently had a new door fitted quite recently, but it still can't be very weather-proof!

There wasn't any noticeable path up Braeriach the way we went - and as Border Reiver says, it's difficult but worth it for the views!

I'll look out for those other Cairngorm brewery beers - thanks for the recommendation!

Lovely report and good to see a new route to Braeriach. Having failed in my own slog from the north in March I'm keen to try another route up there this summer.

Also really like the views this route gives, particularly "Lochan Uaine below Angel's Peak". Whichever way you go there's no getting away from that fact that's its a long way up to Braeriach.