After a night of patchy sleep on the floor of the Corrour Bothy (there was a snorer) I got up early to have a look outside. The cloud was very low, obscuring the top of The Devil's Point and the slopes of Ben Macdui and Carn a' Mhaim opposite. Our goal for today was the trio of munros, the Devil's Point, Cairn Toul and Sgor an Lochain Uaine. Another walker, who was doing a lower level walk through the Lairig Ghru, said that the cloud wouldn't clear until mid afternoon but we remained positive that better weather would soon arrive.

Following a leisurely breakfast, we headed up the steep, well-used path of Coire Odhar and on reaching the bealach we turned left to reach the summit of the Devil's Point (or more properly Bod an Deamhain, as Sir McNeish wishes people to call it).

The cloud had lightened by the time we reached this first top, to allow us some atmospheric views down the Lairig Ghru and up the 'hidden valley' of Glen Geusachan. We headed back to the bealach and then up to Stob Coire an t-Saighdeir, which we renamed to be another part of the Devil's anatomy (I forget which), continually looking back to the views opening up towards the south. Lairig Ghru and The Devil's Point

Panorama - Carn a' Mhaim, Lairig Ghru and the Devil's Point

Following the rocky and boulder-strewn ridge around Coire an t-Saighdeir was quite tiring but very enjoyable, especially when seeing the corrie and the Lairig Ghru way below us. 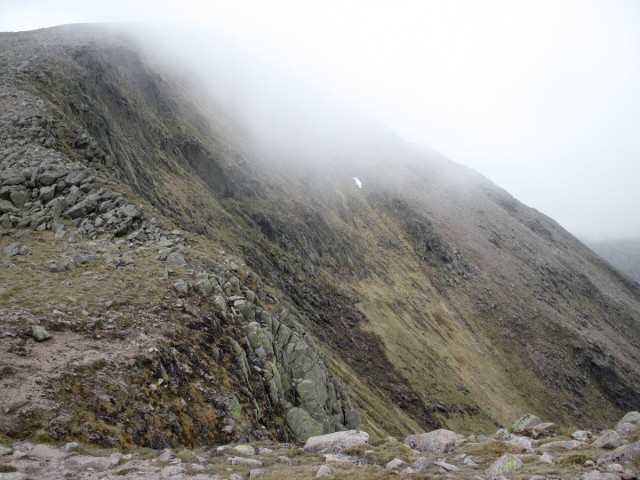 We eventually reached Cairn Toul, where we stopped for our first lunch (always good to have at least two lunches when out on the hill). Amazing views to the north, encompassing The Angel's Peak and Lochan Uaine below, the corries of Braeriach, and the glaciated Lairig Ghru valley.

It was a relatively easy walk across to The Angel's Peak (actually, I do think the Gaelic name Sgor an Lochain Uaine is more appropriate – peak of the small green loch). Here, we had company for the first time in the walk – a snow bunting was busy fluttering and hopping around the summit, even landing on the cairn whilst we were eating our second lunch beside it. Snow bunting at summit of Sgor an Lochain Uaine

According to the excellent SMC book 'Hostile Habitats', snow buntings are a truly arctic species, reaching further north than any other bird, but

even these hardy little birds cannot survive the winters at such latitudes and thousands stream south from Iceland, Greenland and arctic Canada, to reach the relatively benign conditions of the Scottish hills and coasts... By May, most will have returned north, but a few stay to breed on the very highest tops, our closest equivalent to the arctic. In summer, invertebrates form the greater part of their diet”.

There was a surprisingly large number of flies around the summit – perhaps these are carried up by air currents from the lochan and corries below and provide relatively easy pickings for the snow bunting waiting at the top!

Company in human form soon followed – a tired walker reached us from the direction of Braeriach, which he had walked up from the north – he had a long day ahead!

After taking in the views some more, we returned to the bealach above Coire Odhar, taking a easier route away from the rocky ridge, on grassier slopes. We saw a group of walkers on the sky line of the ridge, but I was surprised at how few people we'd encountered over the two days of walking. Other walkers on their way to Cairn Toul

On reaching the bealach we carefully descended the track of loose scree down to the bothy, where we had lunch before heading back to Derry Lodge. We did intend to return to the Linn of Dee via White Bridge but somehow missed the turning!

The remainder of the walk from Derry Lodge was quite a trudge, now that we were again laden with heavy rucksacks, but an animated wheatear provided some entertainment and the thought of food and drink in Braemar spurred us on and eventually we reached the Linn of Dee. An extremely enjoyable weekend of 'boshing and bothying'. 
corrour-and-3-munros-to-LoDee.gpx Open full screen  NB: Walkhighlands is not responsible for the accuracy of gpx files in users posts

I think i saw you heading down the grassy slopes from the top, i was just ahead of the group of 4 heading up the boulders. You may have seen my wee red laser comp by the bothy.

A good day out on the Sunday.

gagfax wrote:I think i saw you heading down the grassy slopes from the top, i was just ahead of the group of 4 heading up the boulders. You may have seen my wee red laser comp by the bothy.

Ah yes, we probably saw you too then - and I think I've spotted your tent by the bothy in some of my other photos. Small world, this walkhighlands community eh?! Enjoyed reading your report yesterday.