After a 5 hour drive from Aberdeenshire, much of it on single track roads, we all arrived at the start point, a couple of kilometres north of Alltnacaillach on the 'Road to Desolation'.

The route up was pointed out by a very helpful sign – 'Way up Ben Hope'. We went up what was initially half stream, half path, but soon were on firmer ground and gained enough height to enjoy expansive views down Strath More. Eventually we reached the broad terraced slopes that lead up to the summit. Each of a series of cairns made me think that I was nearing the summit as I approached the cairn on the horizon, but as I got closer I realised that there was still plenty of hill left! Perhaps that's why it's called Ben Hope – its false tops give you false hope.... Higher up, there were great views alongside the mountain, towards and beyond Loch Hope. However the mountain itself blocked views further north and east, so I was keen to press onward and higher, for even greater vistas. Finally, both a cairn and a trig point came in sight – not a false hope this time! I increased my speed to reach the top so that I could spend some time alone there before I was joined by other walkers who were not far behind. 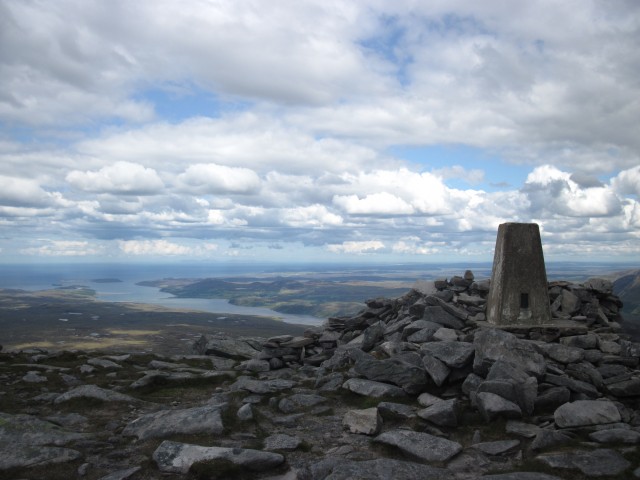 The summit, not a False Hope!

There were outstanding views in all directions, most notably towards Ben Loyal behind several lochs, and towards the Kyle of Tongue, the Rabbit Islands and the cold North Sea beyond.

Ben Loyal and Kyle of Tongue

I tried to spot Tongue Youth Hostel, where we would be staying that night, at the end of the causeway over the Kyle, but couldn't quite make it out. 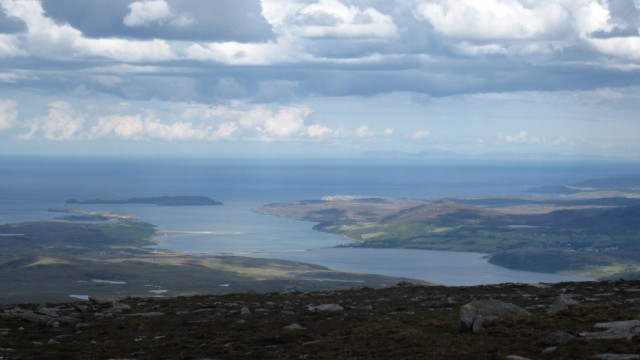 Ben Klibreck, with its whale back outline, was clearly visible – we hoped to be tackling that one sometime over the weekend. We admired the 360 degrees of views and took almost as many photographs, until we were getting too cold to linger on the windy summit any longer, then reluctantly descended back to the cars.

An excellent walk, where many false hopes lead to very real Ben Hope!


ben-hope.gpx Open full screen  NB: Walkhighlands is not responsible for the accuracy of gpx files in users posts

Nice photos Gariochtom. Done this in terrible weather. The path up and down was a river

No views from the top either so nice to see them.

Some excellent photos here GariochTom! I'm visiting family in Oyne at Chistmas - so not too far from Chapel of Garioch where I'm guessing you're from - do you have any recommendations for nearby Munros that are good this time of year? I was tempted to head for Mount Keen with a few of them as I've got a fair bit of experience in the Alps but they don't really have much, so I'm not sure about the Cairngorms that time of year!

Nice report.
It's been a long time since I went up Ben Hope so good to see it again.

ChrisC - I'm not quite in Chapel of Garioch, but not too far away in the 'Heart of the Garioch'!

Mount Keen is probably a good option for a Christmas-time munro - but equally some in the Cairngorms such as Bynack More would be do-able provided there's not too much snow and provided that the snow/ice doesn't necessitate the use of ice axe and crampons! I'm sure others on this site can give you better advice about suitable hills to do in the winter though.

I assume you've done Bennachie before...?!

Great report Tom. Those false summits are a real bummer!!!

Thanks Tom, yeah I think Bennachie was the first hillwalk I ever did! A good one for boxing day if the weather's good!