our_route.gpx Open full screen  NB: Walkhighlands is not responsible for the accuracy of gpx files in users posts
I wasn`t going to bother with a walk report for this one but the more i thought about it the more i felt the need to sing the praises of this unsung glen. I`ve been to Glen Luss twice before to walk up Beinn Dubh with it`s magnificent views over Loch Lomond and a scampered around the lower hills and followed the sron an laoigh burn discovering beautiful rock pools and waterfalls. On each occasion i really enjoyed myself and decided on lone walking days i would return to Beinn Eich and Doune Hill. 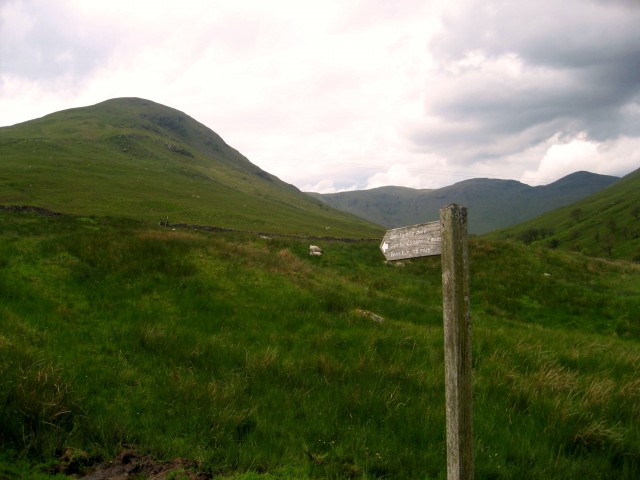 I drove along as far as i could without stopping too close to farmhouses and parked in a double wide passing space, just below Mid Hill, between the ram`s head bridge and Edentaggart farm and walked to the signpost marking the route to Beinn Eich. On my way i saw which i think was a greater spotted woodpecker. I jumped over the stile to discover the ground was immediately boggy as my boots sank into the mud.
Ahead of me though was the 703m Beinn and not in the too far distance was the triple summit of Doune Hill further up Glen Mollochan.
It is a dear green place this with rolling hills around you, and these can be easily dismissed by Munro baggers, but for a nice walk and a good warm up to bigger hills this is an excellent place to roam. There is a path through the marshy grass which appears infrequently as you climb up and doesn`t become so worn until you get near the top but impossible to get lost. There`s a nice little window of Loch Lomond as you look back over Glen Luss. 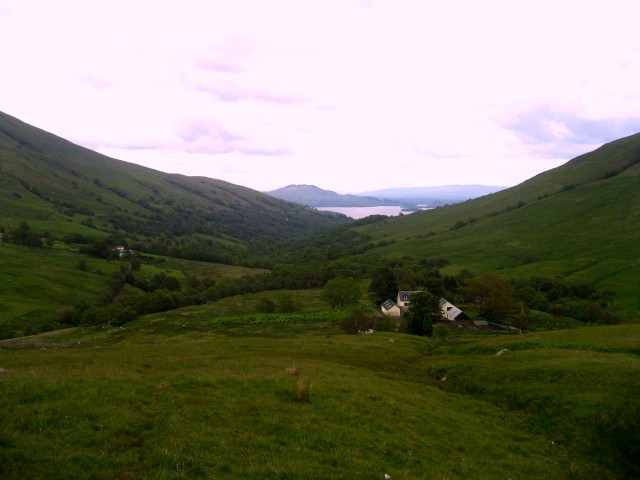 I was only on the hill ten minutes or so when i saw my second unexpected wildlife of the day. You know how it is, you spend half a day walking through some of Scotland`s most remote spots and the only thing you see are crows and sheep, maybe the odd rabbit. Circling in the sky over to my left was a large bird being bothered by a couple of crows. I tried to get closer but it was slowly moving away and i couldn`t get a great picture of it. 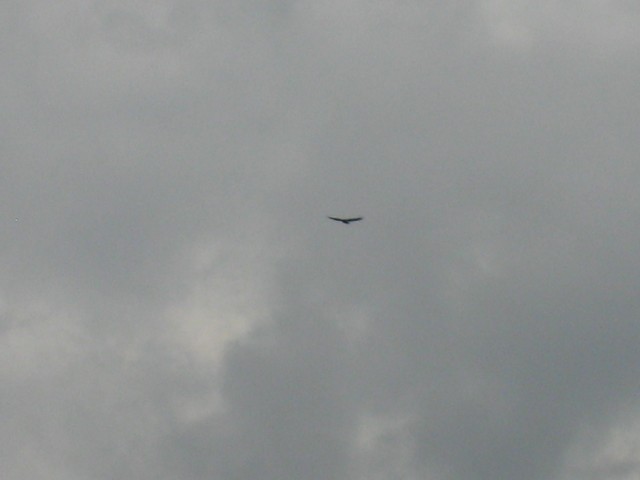 Convinced it was an eagle i headed on my merry way,

now following a fence line that had come up from the south side of the hill to where a few fences met and clambered over onto the rocks on the other side. There aren`t many exposed rocks on this hill and i took the opportunity further up to get some climbing practice in, even though the crags were only ten to fifteen feet high, i think it`s good to keep testing your confidence when still a relative novice at this. I soon reached the top, marked with a small but great looking cairn, and could see the hills of Arrochar beyond my target of Doune. 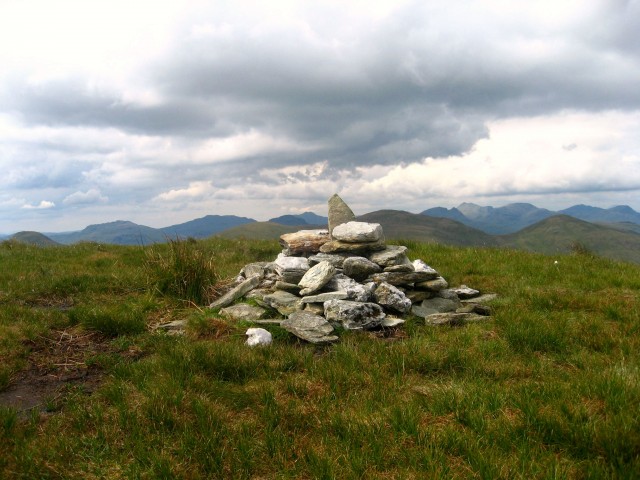 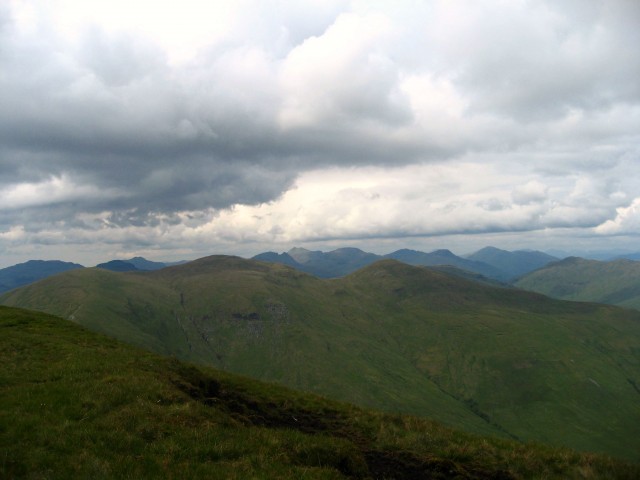 I didn`t hang around though as it was very windy, and continued on towards the beallach of Beinn Lochain. It was then that i saw, down to the east side, just below me and a couple of hundred yards in front of me the rear end of an advancing herd of red deer. I caught a glimpse of about eight of them before they all disappeared. 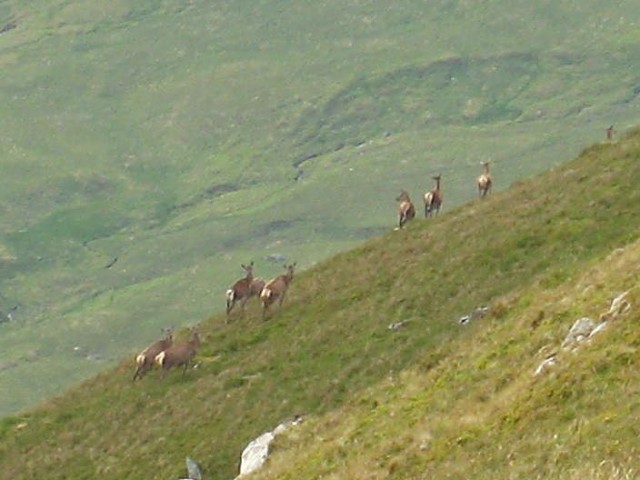 I walked briskly, not wanting to run in case they had stopped close by, but alas, they were gone. Another big smile, deer and an eagle? magic

I descended down a wee bit on the east side as I saw a brown bird take off into the air, could it be the eagle again? It faded into the backdrop of the hills behind and i sat for ten minutes waiting on it but to no avail. I trooped off up the first two peaks of Doune and was quick with the pics as it was incredibly windy and ditched the idea of doing it`s third peak and took shelter under a overhang of rocks and ate my pieces. 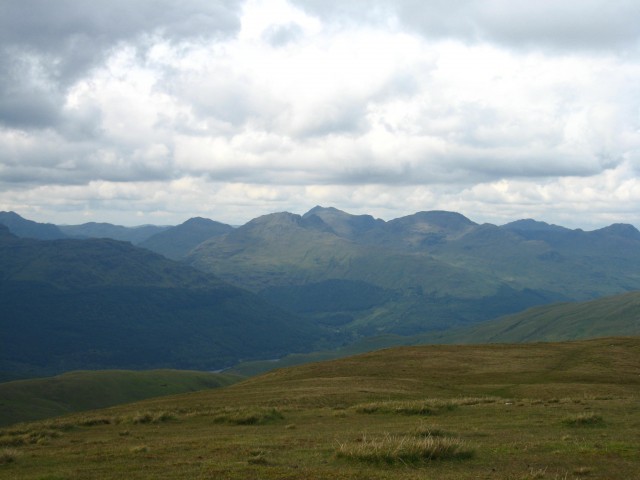 The Cobbler, ben ime and beinn narnain from a different angle 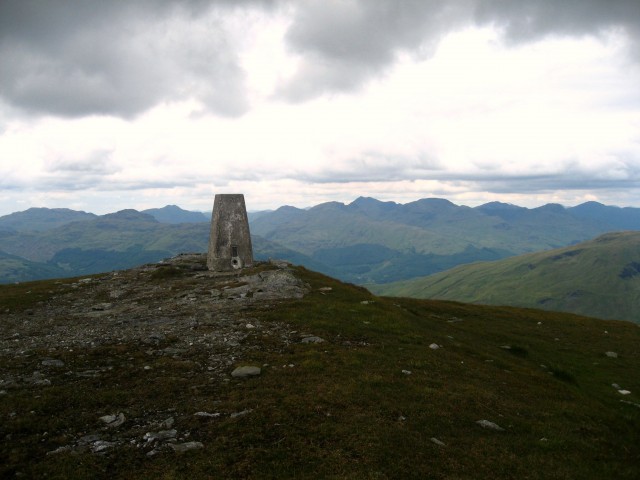 My descent followed the streams down the hillside with their waterslide like waterfalls and jaggy thistles along their banks into Glen Mollochan and along by the river as it widened and twisted down the glen. This area was quite boggy with high grass and quite a high number of sheep carcasses around. I worried about ticks(these were to cause concern 2 days later) but forgot about them when i reached the gravely path and saw the most likely cause of the death around me, a bright orange bushy tailed fox, which had obviously saw me first and was bounding away in the opposite direction. As I got about halfway along the path i thought i`d better cross the river back to the bottom of eich to follow the road back to my car, had i stayed on that path it would have taken me closer to where i parked and maybe even closer to the stag i witnessed from the other side as i took my own call of nature

I zoomed in as best i could but my pics are a bit blurry and maybe he would have bolted anyway if i was on his side. 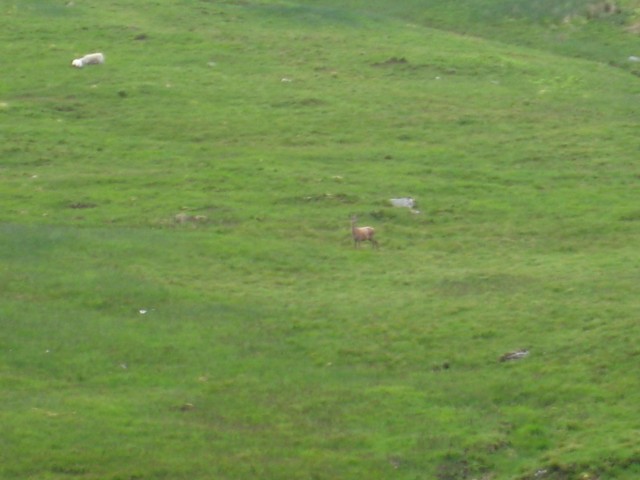 Another fence had to be climbed over and as i looked back up at Beinn Eich, there it was again, the big bird circling in the sky, as if waving me goodbye

Don`t worry big guy i`ll be back to find out what you are.

Good detailed report Tomyboy73. Certainly a lush green area to do some walking. I regularly walk in the Ochils which are similar and in fact are tougher than some of the munros I have done. You saw quite a menagerie of wildlife. Excellent

Lucky lucky you TB. A fantastic walk and all that wildlife too

Did you have any problems with tics?

thanks Monty, thanks Polly
I found a tick hanging from my leg in the shower 2 days later ! i whipped it off and it looked complete, so stuck some savlon on it and didn`t worry anymore about it, till i logged on here and read some other people`s thoughts on it, my wife panicked and told me to phone NHS24, they didn`t know what to do, so sent me to the vicky, where the nurse just laughed at me

and sent me home !

it`s all cleared up now, think it just broke my skin and no more

tomyboy73 wrote:thanks Monty, thanks Polly
I found a tick hanging from my leg in the shower 2 days later ! i whipped it off and it looked complete, so stuck some savlon on it and didn`t worry anymore about it, till i logged on here and read some other people`s thoughts on it, my wife panicked and told me to phone NHS24, they didn`t know what to do, so sent me to the vicky, where the nurse just laughed at me

and sent me home !

it`s all cleared up now, think it just broke my skin and no more

tomyboy73 wrote:my wife panicked and told me to phone NHS24, they didn`t know what to do

Ooops, forgot to say, nice report btw. Like the different angle on the Arrochar big beasts.

Will give this walk a try.