Last of the Angus Grahams: Hill of Wirren

Last of the Angus Grahams: Hill of Wirren

Down in Dundee for the weekend, and as usual I was looking for an escape. As my two nephews were interested in coming, I opted for something short and not too far away. As I'd been meaning to go up Hill of Wirren for a couple of years now, it fitted the bill nicely. My older nephew, Cameron knew the drill, as he'd done Cat Law, Corwharn and Hunt Hill with me before, but thinking about it, this was probably Jamie's first Graham, not that he was overly interested in that fact.

Wirren.gpx Open full screen  NB: Walkhighlands is not responsible for the accuracy of gpx files in users posts
The drive up to Brechin was quick, but I was berated by the boys for not having a Satnav to lead us through the windy minor roads to Glen Lethnot. Despite this, I managed to get there without taking any wrong turnings. There were a number of options available for the ascent, but I knew that interest would wane fairly rapidly if I chose a long route, so we settled on the SW spur. There was parking for 3 or 4 cars just past the farm of Stonyford, where a public right of way was signposted to Tarfside. 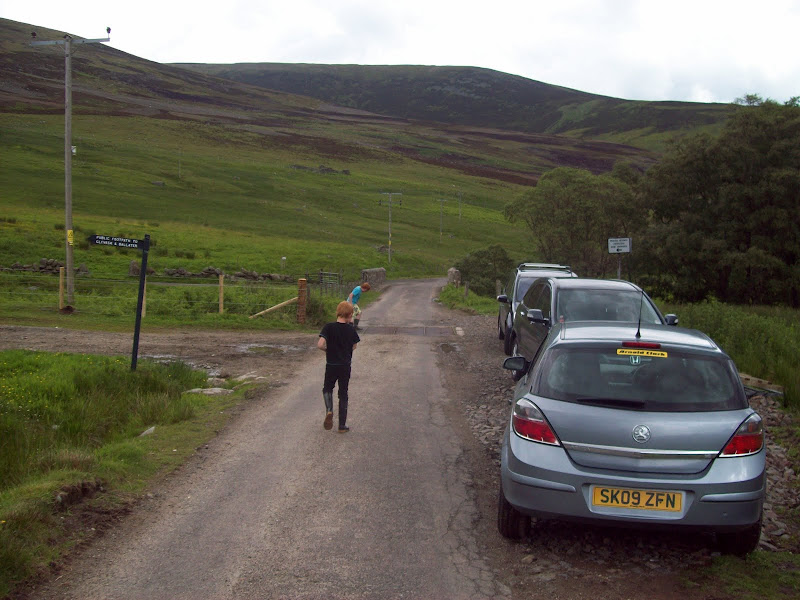 We didn't follow this, but instead headed a few paces back down the glen and walked up the tarmac driveway to Auchowrie. Shortly before reaching the farmhouse, we went through a gate on the left and walked up through an area of grazing. Another gate led us out onto the moorland, where a short section of following animal tracks through the heather brought us to an unmarked track. 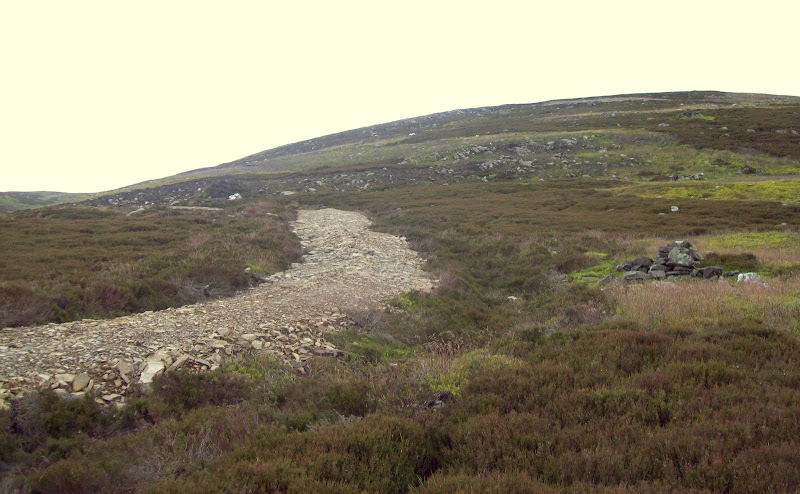 We followed the track for a short while, but it seemed to curve off into the corrie on the left, so we picked up a fainter path, which followed a line of grouse butts up the spur. These provided enough interest to stop the cries of 'are we nearly there yet?' We stopped in one for a drink. The weather was looking pretty grim in most directions, but it was pleasant and occasionally sunny where we were.

Towards the head of Glen Lethnot: 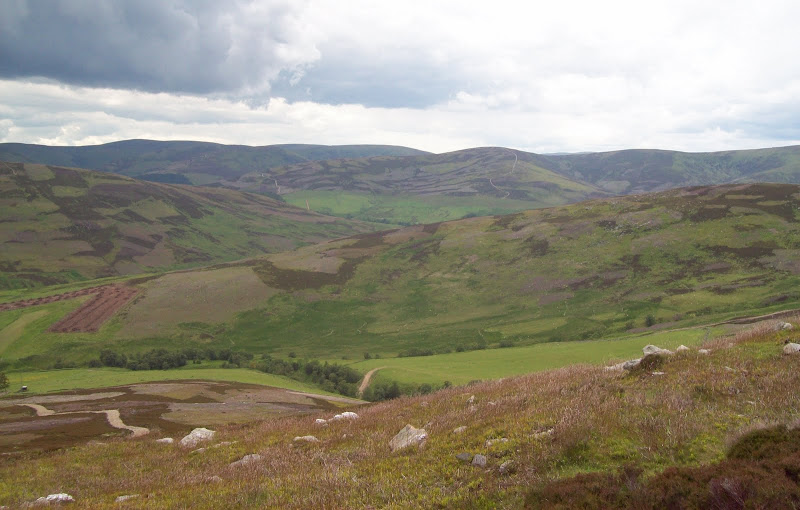 Across West Wirren to Mount Keen: 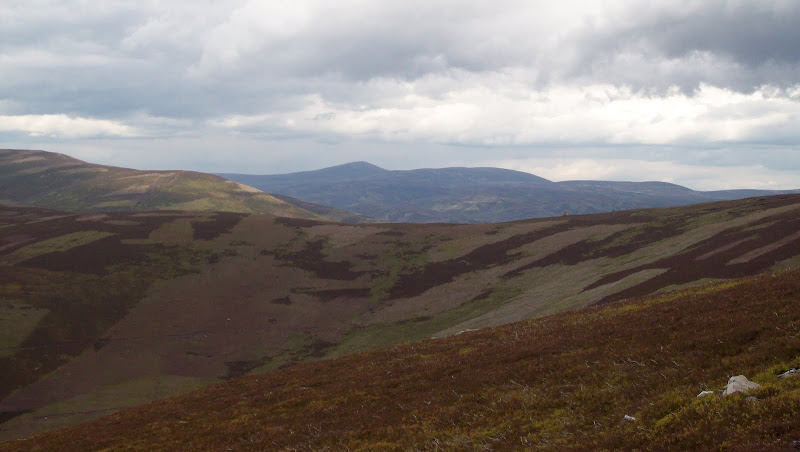 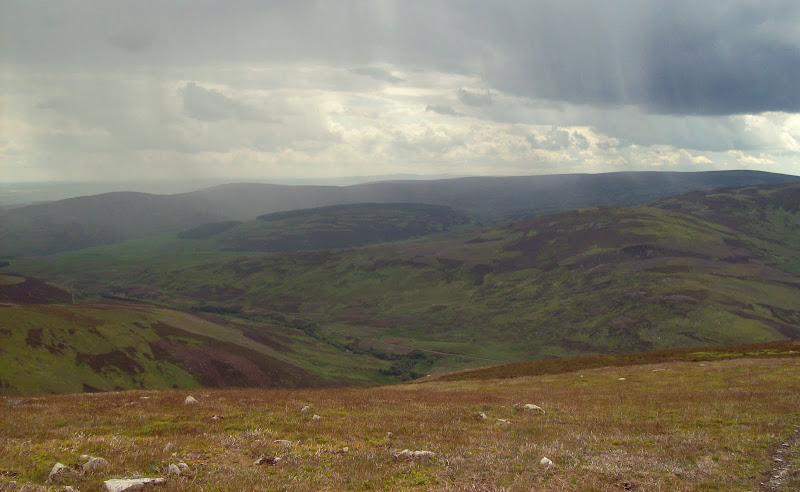 Towards the top of the spur, the grouse butts ran out, and before long, Jamie was complaining of tired legs. I told him we were only 10 minutes away from the top, and he would be fine. Sure enough, the approach to the trig point was mired in peat hags, which he happily charged through. Although their attention span seems to wander after a short amount of walking, their bizarre obsession with dirt and water would probably give them a good grounding in Graham bagging! (I know this is typical in kids, but at 12 and 9, I would have expected them to have grown out of it by now).

The boys race for the summit: 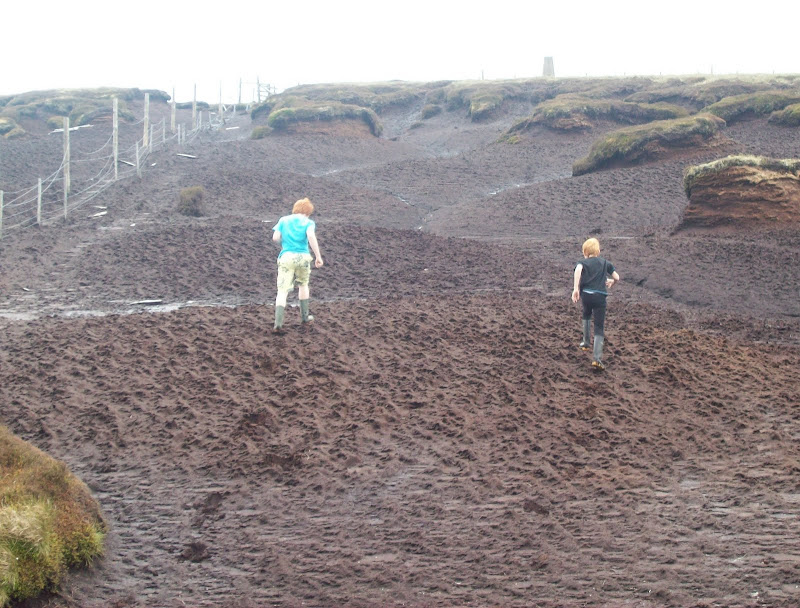 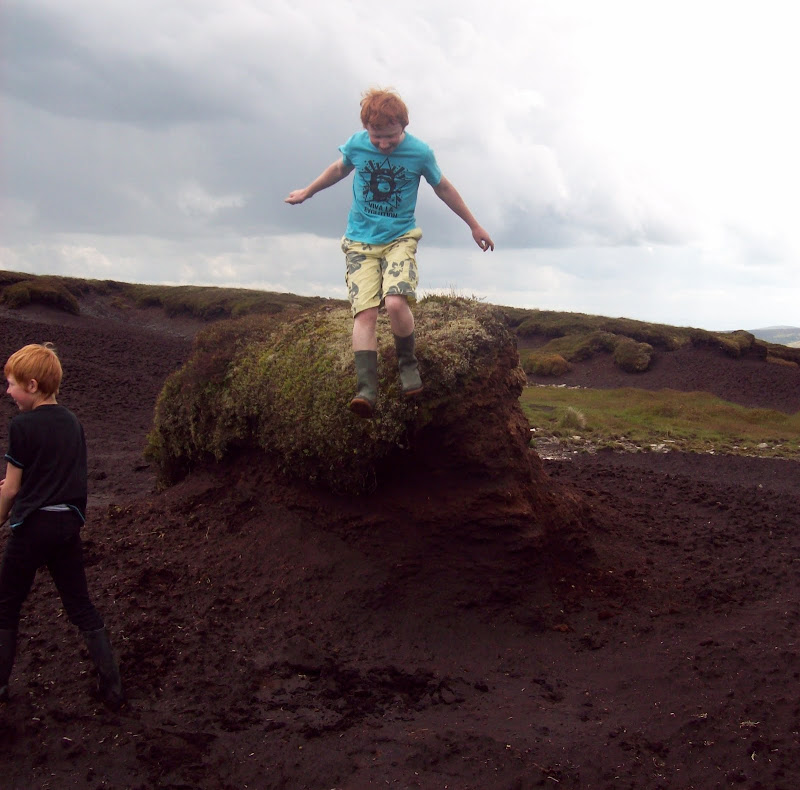 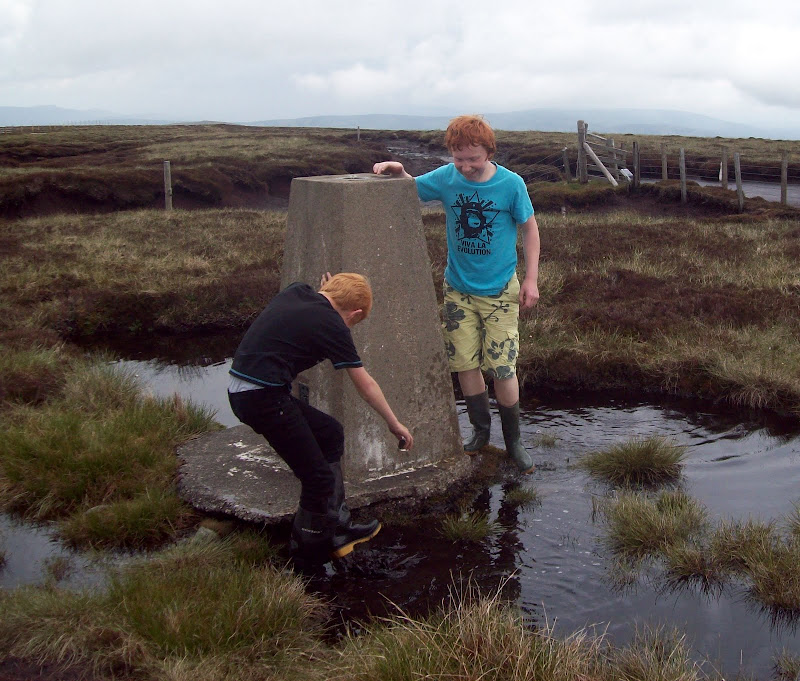 The ascent had been surprisingly dry and easy going, but Jamie now made up for it by jumping into every puddle and hag he could find. Fortunately a section of the electric fence which follows the main ridges had collapsed at the summit, allowing them to cross without frying themselves. 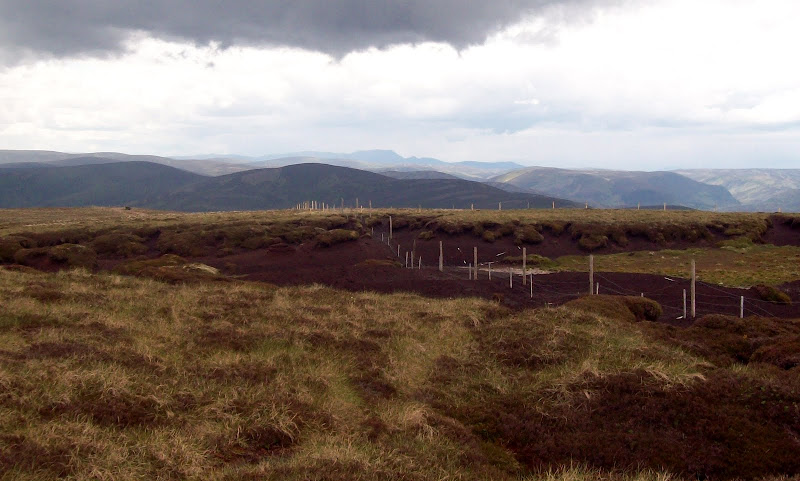 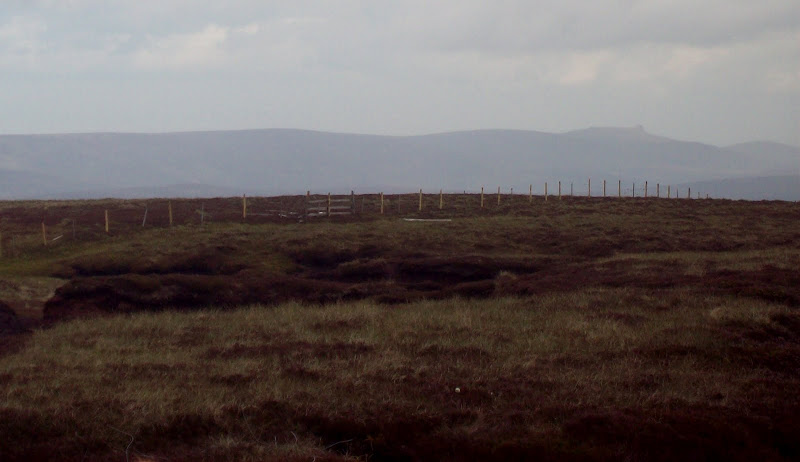 Cameron suggested we descended a steeper, more direct route, which we did. He and Jamie also wanted to roll the whole way down, which they made a pretty good attempt at, although they stopped after hitting a few hidden rocks! We cut across the head of the SW facing corrie, and back onto the spur we had ascended, getting caught in a brief shower in the process. Looking back up the hill, the cloud was now licking the summit.

Weather moving in over Glen Lethnot: 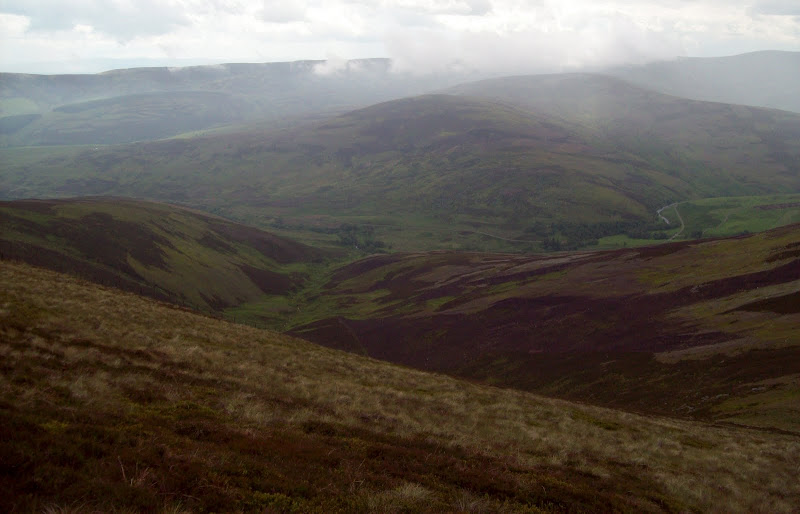 Cloud descending onto Hill of Wirren: 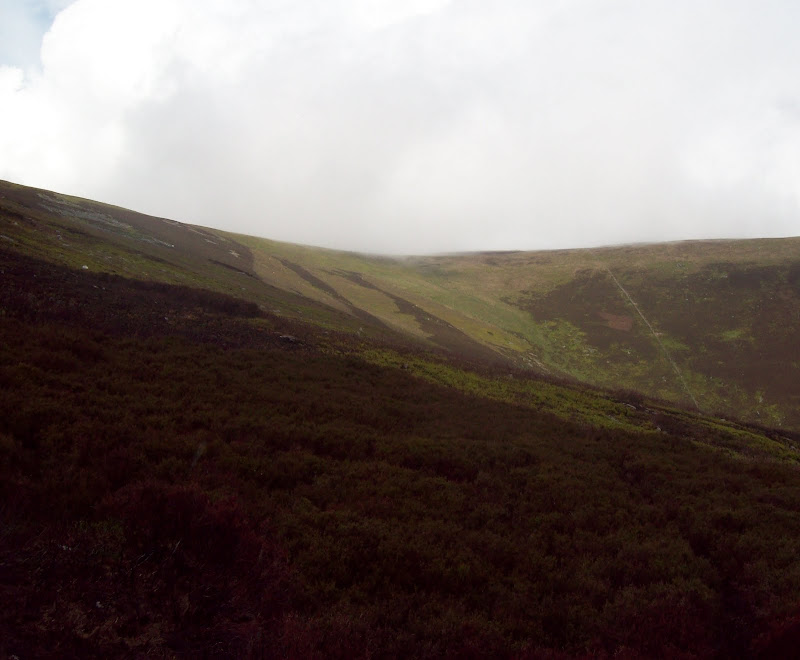 We descended the newly built track all the way through the farmyard at Auchowrie, passing a large turkey on the way. Cutting down through the field below the farm got us back to the car just as a really heavy shower was beginning, along with the odd rumble of thunder. The weather on the drive back down the A90 was shizophrenic, with bright sunshine followed by some of the most intense rain I have ever driven in, followed by more sunshine.

As with most of the Angus hills, there was plenty of wildlife about. As with most of the walks I have taken the boys on, they were so noisy that none of it came anywhere near us! Fortunately we weren't within earshot of anybody else for the whole day. They both enjoyed themselves a lot.

Nice report, Malky. I don't think I've ever come across that much peat-bog on all my Scottish climbs! I thought peat-bogs of that size were only to be found in the Pennines and parts of Wales

Still, the lads seemed to enjoy it.

Red Peak wrote: I don't think I've ever come across that much peat-bog on all my Scottish climbs!

I'll second that and add that I've not come across that much energy on a hill either, running through the bog, jumping off the hag's....damn kids and their boundless energy............even in wellies

Nice report - good to see the boys having fun. I've done this a few times from Dundee (it's an alternative to going up Glen Clova all the time) and if you combine West Wirren and the Hill of Wirren you get a half decent circuit out of it.

Still can't believe you can find a peat bog on a hill top like this - with just a trig point in the middle. Not a hill for doing on a rainy day unless you like wet feet ...

Nice report Malky,
Good to get the young ones interested. Excellent range of peat hags. Rolling down the hill

I bet you were too

From the Glen Esk side there's only a short bit of muddiness.

Cheers all. Would definitely explore some other routes up in the future, but this time the shortest was the best

monty wrote:Rolling down the hill

I bet you were too

I'm the grumpy uncle. I made some excuse up about it being bad for my dodgy shoulder

kinley wrote:From the Glen Esk side there's only a short bit of muddiness.

On this route, it was pretty dry, and there were only hags to cross for the final approach. Even they were drier than they look. Still, it must compete with Carn Tri-tighearnan for haggiest hill in Scotland!

I'd have been puggled by the puddles. Cracking report Malky